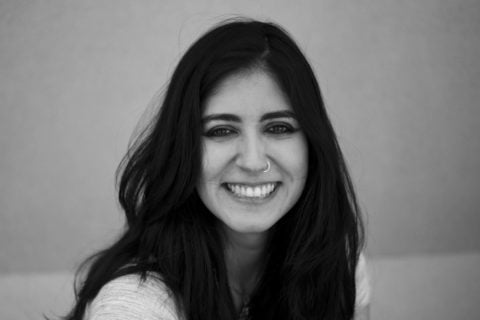 "The longer it's been out on the Internet, the longer the Internet seems to think that it belongs to them. It's scary being a creative person sharing their work online."

With over 400,000 followers, Nikita Gill is one of the most popular poets on Instagram. But “Instapoet” isn’t a box she wants to be placed in. The 30-year-old Indian-British writer has penned short stories, studied design, illustrated her new book and aspires to someday try her hand at filmmaking. Listening to her speak to her past and future projects, it’s clear Gill has the passion, curiosity (and eccentricity) of a true creative. If she’s in a box, it’s one without a ceiling.

If you’re looking to indulge in Nikita Gill’s wisdom beyond her Instagram feed, you’re in luck. Gill has two published books, Your Soul is a River and Wild Embers, with a third, Fierce Fairytales: & Other Stories to Stir Your Soul, coming this fall. While she was in town promoting her forthcoming book, we sat down over coffee to chat about toxic Disney tropes, the path to social media stardom and what it’s like to have your artwork uncredited—even by a Kardashian.

Fantasy and feminism are two of the recurring themes in your writing. Is there a relationship between these two topics?

A very talented friend of mine says that fantasy is a really good way of coping. A lot of writers use fantasy to cope with inner trauma.

Speaking of fantasy… I saw that you did a couple of Game of Thrones inspired poems. Is popular culture something that inspires a lot of your poetry?

The critique I got for Wild Embers was: “Oh, I’m so upset because it’s not Grimm’s or Hans Christian Andersen fairytales, she’s talking about Disney.” But Disney has influenced the lost values of young women with their stories so much, and no one’s talking how toxic they are. Sleeping Beauty, Snow White, The Little Mermaid…all of those toxic tropes of men coming to save you. The point of a lot of my work is to address what culture has done to young women and young men and like, binary people, and to talk about it.

How has social media shaped your poetry? Has it changed you as a writer?

I don’t think it’s actually really changed. I’ve actually been writing on the Internet for like ten years. I’ve been around a long time now, I’ve seen the Internet change into something else. There’s a defunct WordPress blog that’s is still around. When you’ve been writing for this long, social media doesn’t influence your work. You basically change the way you approach the mediums.

Instagram is very visual. So, when I write a poem, I’ll usually go: “When I was writing that line, it made me cry.” So I will share that one line. And then, what’s really interesting is seeing how the community reacts to that particular line.

Does audience engagement influence the kind of writing you choose to put onto Instagram? Are likes something that fuels what you post?

No. I’m trying to keep my social media account as organic as it was when I started it. When I post, it’s never according to like “Oh, if I post now I will get the most likes.” I just post what I want. It’s never been influenced by how many likes I will get. Some of my favourite poems—which I think are my best—they get, I don’t know, 6,000 likes or something. Then when I post one line I randomly wrote on a napkin in a hurry, it’ll get 20,000 likes. So, it doesn’t matter. If you let your writing be influenced by the likes that you’re getting, it’s no longer organic. I believe in my art so I am an artist and that’s what’s important.

Do you think that that’s good advice? I think there are lots of people who are trying to get their art out on Instagram and would love to have a following like yours. Do you think the best advice you could give those people is to just be authentic?

I feel like there’s a purist in all of us who kind of says: “just make beautiful things and don’t worry about all that.” But I know that is something that people care about now, especially because of the way the algorithm messed things up. As far as I’m concerned, I feel very fortunate that I came into Instagram at the right time. People approach me asking, “how do I get more followers?” And I really don’t know what to say to them.

Wait, do people actually ask you that?

All the time. Because they think that I followed a very particular process, like I followed some kind of flowchart. I didn’t. So, when I tell them that I don’t know, I just got lucky, they don’t like that answer. They think I’m lying to them.

Trolls are something you’ve had to deal with online. Have you ever thought to yourself, “I have my books. I have another medium of success. I don’t need this toxic Internet culture”?

I love the amount of young people—especially young girls—who reach out to me and say: “Thank you so much. I got strong today because of what you wrote.” I would never give that up. There is nothing that could replace that experience.

As a woman who’s been on the Internet for a long time, let me tell you this. You cannot engage with those people. Engagement is what they’re looking for. You’ve got to block, delete, pretend it never happened. You don’t need that in your life, no one does. So, I’m trying to do that with negativity online. I just block and delete. I write an angry poem about it sometimes, so I can get it out of my body.

Another thing you’ve had to deal with online is having your poetry republished and uncredited. And not just from small accounts, from people like Khloe Kardashian.

She did it again recently.

Yeah, after all that drama two years ago. It’s really horrible because sharing something uncredited like that, it’s like you intentionally cropped out my name. I’ve almost given up that one piece of writing to the world now.

The longer it’s been out on the Internet, the longer the Internet seems to think that it belongs to them. It’s scary being a creative person sharing their work online. And I think artists go through this so much more because you see so many turn their working to a meme and send it out there with no one ever knowing who the artist is.

Do you think that there’s a fix to this problem?

I think personal responsibility is the only thing that can fix the problem. We need to be making people aware that it’s not okay to share work uncredited. I’m an optimist, so I’d like to believe that people just aren’t educated. It’s done out of ignorance, no one really means to maliciously hurt people. I think that if people are taught personal responsibly, they will practice personal responsibility. And they’re getting there! People call people out online quite a bit, saying: “Oh, this was the artist, can you please credit the artist next time?” That’s a step in the right direction.