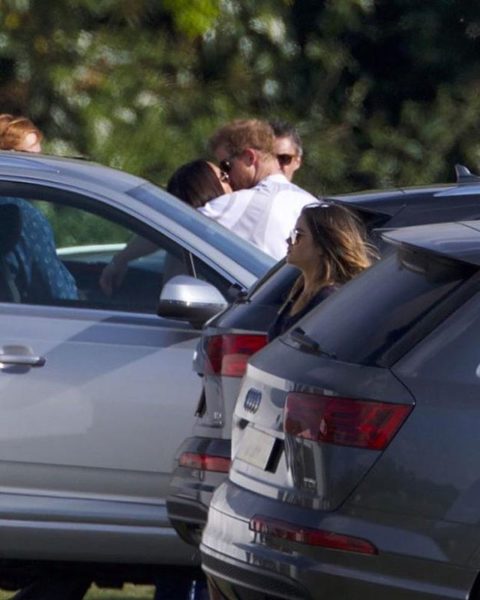 Prince Harry and Meghan Markle made their first public appearance this past weekend, and we almost missed it. Almost.

To help raise money for Sentebale and WellChild, Prince William and Prince Harry mounted their horses and played in the annual Audi Polo Challenge at Coworth Park Polo Club in Ascot, England. While the exclusive polo match attracted many A-list stars, including Emma Stone, Eddie Redmayne, Matt Smith and Luke Evans, we were pleasantly surprised to see Suits actress Meghan Markle in the crowd, supporting her beau and giving him a post-match smooch.

While the event may have been more on the low-key side when it comes to royal appointments, it looks like things are getting serious between the two. Until now we’ve heard every rumour in the book—from Markle thinking of quitting Suits to a possible upcoming proposal to getting Kate Middleton’s approval—but this event further proved how serious this relationship is becoming. Case in point: the actress, who was wearing a white Babaton for Aritzia blazer and a navy blue dress, sat next to Prince Harry’s “second father”/mentor Mark Dyers during the match.

While paparazzi pics of the couple holding hands, Christmas tree shopping and attending a friend’s wedding in Jamaica are more than enough to get us excited, nothing beats an unexpected appearance from the two at an official royal event. With Pippa Middleton’s wedding coming up fast (it’s May 25, btw), the couple is probably cushioning the media frenzy by marking this casual polo event as the first official public appearance. You know, just so the attention stays on the bride-to-be. Now let’s hope there’s a cute side-by-side photo of the two at the reception to call it official. Let the countdown begin.