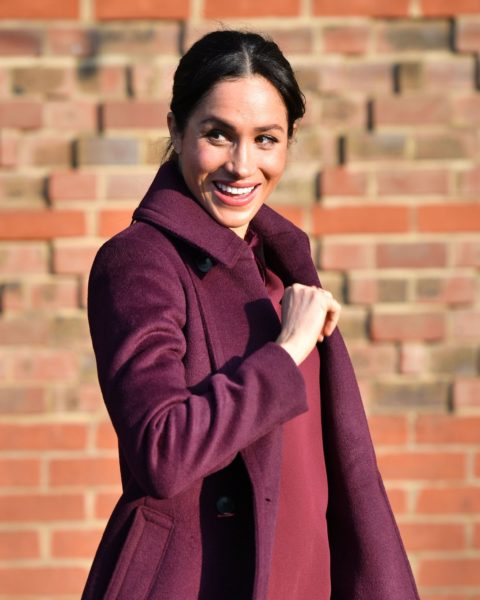 All the Canadian Brands Meghan Markle Wore This Year

Well before she officially became a Duchess and her every sartorial move was observed with eagle eyes, Meghan Markle’s penchant for Canadian designers was widely known. Makes sense, considering she spent six years not just in Toronto but in the company of Jessica Mulroney, one of the country’s foremost stylists (and a champion of its local designers.) Markle has been spotted more than once in Club Monaco separates, Mackage and Sentaler coats, and dainty pieces of Birks jewellery. In fact, it was a Toronto-based brand, Line the Label, that the Duchess-to-be chose for one of the biggest days of her personal life—the day she and Prince Harry announced their engagement. Read on for a recap of all the Canadian brands Markle wore this year alone.

Soia & Kyo
For one of her last official engagements of 2018, Markle wore a floral cap-sleeved dress by Los Angeles-based Brock Collection, under a grey wool coat by Quebec company Soia & Kyo. It’s not the first time she’s worn a piece by this outerwear maker—she’s been photographed in at least two other styles from the brand in the past.

Aritzia
Markle seems to own multiple pieces by this Canadian retailer: the burgundy Wilfred dress she wore to the Invictus Games in Toronto last year, the olive Babaton trench she wore while on royal tour in Australia, and most recently, a pale pink cashmere Wilfred coat that has since—obviously—sold out.

The Duchess of Sussex yesterday attended a meeting with The Association of Commonwealth Universities (ACU) at King’s College London. Her Royal Highness joined university leaders, academics and international scholarship students as they discussed the role of higher education in addressing issues such as human trafficking, modern slavery, gender equality, peace and reconciliation, and climate change. In a speech during the Royal Visit to Fiji in October, The Duchess announced two ACU Gender Grants for the University of the South Pacific and Fiji National University, to fund new learning initiatives aimed at empowering female university staff and promoting gender equality.

Smythe
Markle’s not the only famous face that loves this brand—Nicole Kidman, Viola Davis and Julia Roberts are a few of its other A-list fans. This year alone, Markle has worn the Toronto label, known for its impeccably tailored blazers and coats, three times: an eye-catching cobalt blue coat at the launch of the ‘Together’ cookbook, for which she wrote the foreword; a long taupe coat for an official appearance in London with Prince Harry; and a double-breasted grey coat for Anzac Day.

Jason Wu
Another designer Markle wore multiple times this year is Jason Wu, a New York-based designer who grew up in Vancouver. She was the first person to wear a look from his Spring 2019 collection before it even hit the runway, while out with Prince Harry in London at an official gala. She also wore two Jason Wu dresses while on royal tour—one forest green sheath in Fiji and a black ruched halterneck dress in Sydney.

Judith & Charles
The Duchess wore an elegant tuxedo-style dress by this Canadian retailer (a favourite of Sophie Gregoire Trudeau, by the by) to a viewing of the acclaimed musical Hamilton in London this summer.

Club Monaco
Last month, Markle wore a burgundy dress and coat from Club Monaco—one of her favourite brands—for an official visit with the survivors of the Grenfell Tower fire in London. It’s far from her first outing in the affordable brand—she wore a pleated dress from the retailer to attend a wedding with Prince Harry this past August, a sleek LBD with gold button detailing for an official appearance at a Melbourne beach while on royal tour, and a grey trench while in Wellington, New Zealand.

Meghan, Duchess of Sussex, in #ClubMonaco for her surprise visit to The Hubb Community Kitchen in London ahead of the holiday season.✨ #meghanmarkle #duchessofsussex

House of Nonie
This Calgary label specialising in sleek, minimalist pieces counts both Markle and Jessica Mulroney as fans (no surprise there). For a visit to the Nelson Mandela Centenary Exhibition in London this past July, the Duchess chose a blush pink sleeveless trench dress from the brand’s Spring 2018 collection.

Mackage
Montreal-based brand Mackage knows a thing or two about the so-called ‘Markle Effect’. Within an hour of the Duchess being photographed in a beige coat by the brand while on an official visit to Belfast, the piece was sold out. Eagle-eyed Markle followers will recall she wore a navy double-breasted coat by the brand for her first official engagement as a royal-to-be last winter, and a burgundy leather jacket to the Invictus Games in Toronto last summer, when the couple made their public debut.

Greta Constantine
Mackage wasn’t the only Canadian brand Markle donned for the aforementioned appearance in Belfast. She also wore a flouncy green skirt by Toronto-based label Greta Constantine, a brand she has worn in the past as well.

Erdem
For her first official behind-closed-doors Christmas with the royal family as Duchess of Sussex, Markle chose to do something Kate Middleton has long been applauded for: she re-wore something. The outfit Markle gave a second spin to is a ruffled dress by Montreal-born designer Erdem Moralioglu, who is now based in London. She previously wore the dress for an appearance on The Today Show back in 2016, when she was a star on Suits.

Maison Birks
It’s hard to keep track of the number of times Markle has worn pieces by this iconic Canadian jeweller, but considering the regularity with which she appears on their Instagram account, it’s safe to say it’s a lot. A brand she first discovered while living in Toronto as an actress, Birks’ dainty pieces have become a permanent fixture in her jewellery box even as a royal.

We've been honoured to be part of Meghan Markle’s special moments during her courtship, engagement, and marriage to The Duke of Sussex, Prince Harry. Swipe through to see the Birks jewels the Duchess has worn since her first public appearance with Harry at the Invictus games. And tap the link in our bio to shop our #RoyalWedding Inspiration!

Here’s to 2019 and many, many more Canadian shout-outs.

Photography via Tim Rooke/REX/Shutterstock
Get the best of FASHION in your inbox Thanks for signing up!
The latest fashion, beauty and celeb news delivered right to your email #FASHIONforall Now, check your inbox to complete your subscription
We won’t ever use your email address for anything else
Want even more FASHION? Follow us on social media.