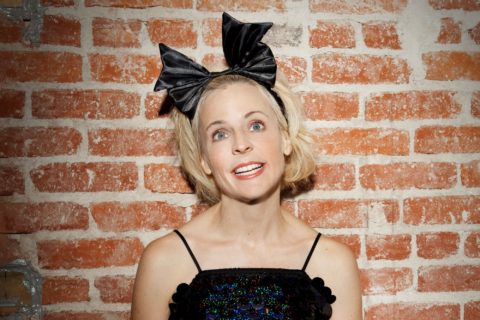 Maria Bamford: Just As Lovable As Ever

"I wish I were a better person. My sister finally told me after about 10 years that my impersonations of her hurt her feelings, so I was like, 'oh, shit.'"

There’s nobody quite like Maria Bamford. She has been a trailblazer in using both standup and her acclaimed Netflix show Lady Dynamite to delve into her experiences with bipolar II disorder and OCD. She’s a talented mimic, shaping her signature squeak into laconic Valley Girl cadences or an earnest Midwestern twang. She is a little strange. She is also terribly charming. Her specials poke fun at the form; one of them featured her doing standup for her parents, sitting on their couch. Her most recent Netflix special, Old Baby, found Bamford starting off performing in the mirror, then moving onto doing jokes for her husband and dogs, then working a small party for friends, then appearing at a bowling alley, and finally crushing it in a theatre full of cheering fans…and then retracing her steps through all these venues, all the way back to her looking in the mirror. It’s like watching an entire comedy career in one hour, both hilarious and poignant.

She is unafraid to experiment with format, turning weird jokes inside out and working them until they’re even weirder—something many women in comedy tend to shy away from, it seems. She is one of the industry’s most well-respected comedians, a comedian’s comedian. And she does a set you’ll never forget. We caught up with Bamford just before she hit Canada for a couple JFL42 dates to discuss opening up about her mental illness, the perils of joking about your family and why we need to pay our comics.

Maria Bamford will be at the JFL42 comedy festival in Toronto Sept. 27 and 28, doing standup and sitting down for a Q&A.

What made you want to get into standup originally? What appealed to you?

I always loved the feeling of being on stage. When I was three, my parents forced me to play the violin, and I loved being on stage, but I did not like playing the violin. I couldn’t wait to get that cock-block out of the way.

What do you love most about doing comedy?

It’s changed over the years. I was very shy, so originally it was a really good way to have human connection, even if it was limited. It felt very safe. Now, it’s just trying new ideas. And still trying to connect with people, although it is more community-oriented: like, I want to connect with other comedians, and be a part of the group. That’s more important now.

What’s the hardest part about being a comedian?

This could be said of every single job in the United States at this point, but there is no social welfare net. So, even if you’re doing a TV set, you really have to have a full-time job, in order to pay expenses, to live in these giant cities like Los Angeles or New York. Yes, certain people won the lottery and are able to do it, but there’s much less of a middle-class element in comedy. The income for middle acts across the country has remained the same for the past 25 years, so that’s the hardest, because being without food or shelter is not as funny as you’d hope.

What are you proudest of, in this new material?

I just to have to keep going, you know? That’s how I look at the arts, at this point, for me, is that I’m a flower, and I’m blooming, and that’s all I need to do. I’ve made it 100 times over—but just to keep making things, I think, is wonderful.

You’ve been lauded for being very open about many topics many folks shy away from, including your mental health experiences, as well as your skill in performing more surrealist bits and strange characters. Does this fearlessness come naturally to you, or do you have to psyche yourself up to be so open on stage?

In any job, there’s always new highs and new lows: like, there’s always a new thing. I did a gala last night for the TV show and I was terrified; I did three runs of the sets and I’m not even sure how it went, after. So I think sometimes newcomers can be just as good—or better—than the comedians who have been doing it for 30 years, because of how much they’ve prepared, and how excited and focused they are. Like, I’m distracted by fudge and kites.

Comedy festivals occasionally come under fire for having too few women on the bill or being too white, but at JFL42 this year there’s a much bigger number of comedians of colour, and female, queer and non-binary comics. Do you feel that the comedy industry is improving, diversity-wise, or are we still woefully lagging behind?

This year has been heartening; it’s a much better situation. The one thing that I think needs to change is that festivals don’t pay the un-repped comics who come out. And those are the people who need it the most. They pay for hotel, but everyone has to pay their flight two weeks out, which means the flights are packed and you have to pay maybe $800 to $1200 per ticket, so you’re borrowing money, or sometimes in the hole, or in credit card debt, to come here. That needs to change.

Being on the road all the time can be really hard on a person. How do you practice self-care?

We slowed down a lot, over the past several years, because of health issues. I just don’t have the energy to do things, so I do probably six cities a month at this point, and just do one night at a time. I’m definitely not a hard-driving comedian doing a 150-day tour on a tour bus, you know? I’m definitely on the high side of self-care; I’m sitting by a pool now, and I’m going to get in it after we get off the phone.

Yes, for sure—it’s been very helpful to me to know how many people are out there who have had the same experiences, or similar experiences. So it’s only been positive.

Is talking about your personal relationships hard on the people you talk about?

I wish I were a better person. My sister finally told me after about 10 years that my impersonations of her hurt her feelings, so I was like, “oh, shit.” So I have had those talks. And I’ve had people do impersonations of me, which is very humbling. I would hope that it brings me closer to people in my life—that they are part of my work—but I also hope that they would feel comfortable telling me if they didn’t like it. My husband has spoken up and said, “hey—the way I appear in that joke, it felt weird,” and I was like, “oh! Oh, yes. Yes, you are correct.” And I rewrote it, and it made it a much better joke. Nothing’s worth losing a family member over; no story or shtick is worth that. Maybe I can work together with my sister, who I’m hoping to talk to about this very issue. It’s interesting, because when I started, and I was doing impersonations of my family, nobody cared, because nobody was watching, and then suddenly—they live in a small town—and people were like [heavy Minnesota accent] “did you hear what your sister said about you? In that one show? Ohh!” So I don’t know what that’s like, and how painful or bizarre that is, so hopefully it’s only to bring us all closer together. The pain, the stinging broth of intimacy that we’re all soaking in.