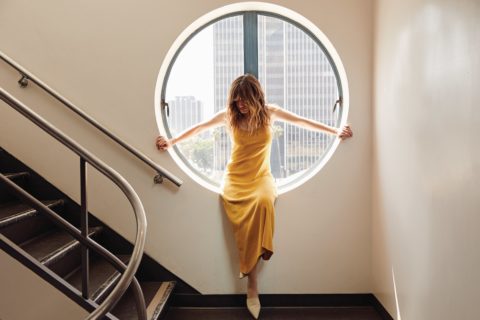 “I just wanted to act, and I just wanted to perform. So politics weren’t even a part of that conversation for a long time. I didn’t have the privilege of thinking that way.”

Kathryn Hahn was never an ingenue. Not that she seems to mind—especially these days. In the imperfect world of Hollywood, when leading roles are handed out to women, they are often either romantic leads or someone’s mother (or both if they are especially meaty). As a result, actresses like Hahn—whom you would definitely recognize even if you don’t always remember her name—play a lot of best friends or sidekicks or comic-relief types. It means having the exact kind of career where the greatest challenge is scoring the job; the job itself isn’t exactly challenging. And, as any motivational poster will tell you, a life without challenges isn’t especially rewarding.

Only, Hahn’s performances—whether as the A-type political consultant on Parks and Recreation or a loopy hippie in Wanderlust—always feel like a reward for audiences. Never being an ingenue may have meant 100 per cent fewer Matthew McConaughey make-out sessions, but it has allowed us to see what miracles of character and commitment Hahn can perform with whatever she is given.

The week we talk, for example, Hahn seems to be in the ether. That week happened to be the 10th anniversary of the film Step Brothers (you know, that Will Ferrell/John C. Reilly flick where they play immature man-children…actually, maybe that isn’t very helpful), so a popular podcast and website devoted an inordinate amount of digital space to discussing the movie. In a film full of surprising over-the-top performances, Hahn’s small role as Ferrell’s quietly desperate sister-in-law somehow stands out as the most committed, honest and hilarious.

As great as she has always been in supporting roles, Hahn has recently shown how impressive she can be when she’s given more to do. Since director Jill Soloway cast her in her first leading role, in the 2013 indie film Afternoon Delight, Hahn has become one of Soloway’s go-to performers. She plays the heartbreakingly real rabbi and love interest in Transparent and the main character in the adaptation of Chris Kraus’s iconic feminist work, I Love Dick, opposite Kevin Bacon. This fall, she’ll co-star with Paul Giamatti in Private Life, about a couple struggling to have children later-ish in life.

Not only are these performances layered, honest and breathtakingly intimate but they also add an inspirational aspect to her career. Hahn proves that with enough talent, even show business can be a meritocracy. Let’s see a wide-eyed ingenue do that.

The characters you play in Transparent and I Love Dick are rightly praised as examples of honest feminist characters. But in your first real film role, in How to Lose a Guy in 10 Days, you played Kate Hudson’s desperate, hysterical best friend, possibly the least feminist role imaginable. It’s been quite a journey.

“Feminism was kind of a dirty word when I was growing up going to a Catholic school. Even when I was in college at Northwestern and surrounded by so many men, [to be associated with feminism] was almost like labelling yourself as ‘other.’ I was never a beauty, so my survival method was to be one of the guys. I loved a fart joke. For a lot of us misfits, who felt ‘other,’ theatre was a way to belong. It was a place for a lot of us who were pretending to be normal when we knew we were something different on the inside, whatever that means. After school, when I first came to L.A., it was a heightened version of what I’d been feeling in high school, and it was less about my gender and more about surviving.

“I was never a beauty, so my survival method was to be one of the guys. I loved a fart joke. For a lot of us misfits, who felt ‘other,’ theatre was a way to belong.”

“I just wanted to act, and I just wanted to perform. So politics weren’t even a part of that conversation for a long time. I didn’t have the privilege of thinking that way. In retrospect, you can look at your body of work, at the opportunities you’ve been given, and then sort of piece together that narrative. But when it’s happening, it’s a chaotic scramble. There are a thousand things that I didn’t get, and the few things that I did, and that’s the narrative that was pieced together.”

I listened to a Malcolm Gladwell podcast where he talks about how when you’re in a minority, in order to get along, you naturally put aside what you believe and take the side of the majority. If you’re a woman, you kind of have to make jokes about other women and things like that.

“I remember, my natural posture was to hunch over, because I never wanted anyone to see that I had breasts. I never wanted to be seen. I hid my femininity. I wanted to apologize for taking up space, and I feel like a lot of women would feel the same way. I just felt like my go-to was to demean myself and make fun of myself. And it worked, but that kind of does chip away at something. I just read Hunger by Roxane Gay. Have you read that?”

“I never wanted to be seen. I hid my femininity. I wanted to apologize for taking up space, and I feel like a lot of women would feel the same way. I just felt like my go-to was to demean myself and make fun of myself.”

“It is so powerful and extraordinary, and I’ve been thinking about it non-stop. She’s an incredible writer, and it has been seared into my brain like a brand. She talks about the lengths that we go to to try to protect our deepest self from hurt. Like you were saying, we find those ways to try to blend in and camouflage ourselves. I’m always in awe of people who are able to come out truly as themselves. It really is no wonder that I became an actor. Sometimes I feel most comfortably myself when I’m either onstage or between action and cut. Isn’t that weird?”

Why do you feel like you’re most yourself when you’re playing somebody who isn’t you?

“I feel that less and less now. The older I get, the more comfortable I get and the less I’ve been wearing makeup—the less I’m interested in all of those things. I still love dressing up every once in a while, but in my day-to-day life, I’m less concerned with that.”

You once talked about how there has been a lot of dissatisfaction on your part with your career up until, well, now. How did you deal with that?

“There was a crazy disconnect between who I was, what I knew I could offer as a creative person and what was asked of me in drama school—when we were all able to be our truest, messiest, loudest creative selves—and what I was being asked to do in this industry.

“So it was very hard for me to be present. I would kind of fulfill an expectation and then go home feeling very unsatisfied. And, of course, I probably felt like I had fulfilled whatever I had to but didn’t feel like I blew anyone away, because I didn’t blow myself away. I didn’t walk out feeling like ‘Oh, I really uncovered something.’

“I never had those juicy creative feelings that I have had onstage or with my true tribe of creative peeps. Honestly, it wasn’t until a couple of things happened. I think the big transition for me was when I got Wanderlust, which is this big ensemble comedy that David Wain directed. I loved that part. And through it, I met my manager. She opened up doors for me that hadn’t been opened before. It was the experience of doing Afternoon Delight, which was written and directed by Jill Soloway, when something cracked open. I could be on an equal footing with somebody as a collaborator and not just feel like I was fulfilling my part in the machine. We were making something together. Honestly, it hearkened back to putting plays on in the backyard. It felt that pure.”

“It was the experience of doing Afternoon Delight, which was written and directed by Jill Soloway, when something cracked open. I could be on an equal footing with somebody as a collaborator and not just feel like I was fulfilling my part in the machine. We were making something together.”

It’s funny that in school we’re always taught the ideal and then when we’re released from university, it’s like “You’ll never get that ideal again.” Like in journalism school, we would practise writing long-form features, but when you’re out of school, chances are you’re going to be writing blog posts or ad copy.

“You’re exactly right. We always talked about that. A lot of acting programs spend a couple of years getting you into the purest place of performance, and then the last year, all of a sudden, is like ‘And wrap yourself up with the neatest, most polished, likable, palatable bow that you can possibly find, because the goal is to get hired.’

“So it’s just like ‘Glam it up, pluck it, hairbrush it, polish it, wax it, stick it and put some highlights on it.’ Anything that they can view of the real you, you’re taught, isn’t going to help you get a part.

“Ultimately, you’re teaching somebody a losing game, because what somebody is looking for is something new. They want something they haven’t seen before, something that is thrilling and unique. Of course, the work would suffer or feel tight and pushed because it wasn’t coming from any sort of real honesty. It was just coming from a need to please.”

One of the words that’s often used to describe your work with Soloway is “vulnerable.” It’s used so much that I feel like it’s in danger of losing its meaning. When you say that you could be vulnerable with her, what does that actually mean?

“You can feel like you can let yourself be totally seen—that through the lens that’s looking at you, you’re able to feel a freedom. I don’t want to say safety, because that implies that you need hand holding, which I don’t need, but I definitely need to feel a freedom and a shared language.”

Photography by TRUNK ARCHIVE
Get the best of FASHION in your inbox Thanks for signing up!
The latest fashion, beauty and celeb news delivered right to your email #FASHIONforall Now, check your inbox to complete your subscription
We won’t ever use your email address for anything else
Want even more FASHION? Follow us on social media.