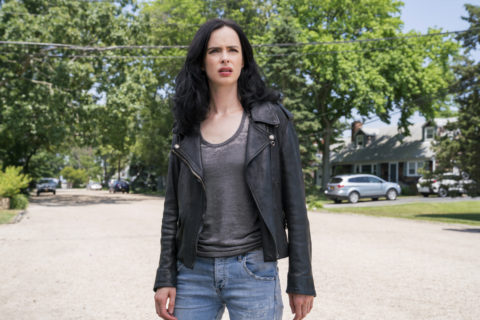 How a leather jacket became one of the most interesting—and challenging—on-screen hero costumes.

When I met Krysten Ritter on the top-secret set of Marvel’s Jessica Jones third and final season, she was wearing a worn-in leather jacket, a pair of lightly distressed denim and black moto boots. Her hair was slightly dishevelled and her skin was seemingly makeup free. The first thing I asked was: “Wait, are you in costume?”

Jessica Jones—a plain-speaking private investigator with a dark past and super strength—is often described as Marvel’s anti-superhero. She doesn’t want to save the world from evil, so she doesn’t dress in a spandex leotard, identity-concealing mask and flowing cape. She does, however, wear protective armour: Jessica’s rugged denim and leather uniform keep others at bay, allowing her to maintain her privacy.

The answer is yes  — Ritter is, in fact, dressed as her character when we meet. However, “this is actually how I like to dress,” she says of the jacket, jeans and boots. “I’ve completely ruined my own life. Because, if I dress like this on the street, people are like: ‘Oh! That’s Jessica Jones!'”

Aside from their shared affinity for simple streetwear dressing, Ritter and her superhuman character have little common: “I’m nothing like her at all,” she says, “I knit and have a little Chihuahua that I like to cuddle with.” Petting pint-sized pups and crafting wool scarves aren’t exactly activities that require a trusty, tough-as-nails moto jacket.

“I kind of inherited this look,” says Jessica Jones costume designer Elisabeth Vastola, who joined the series in its second season. “Which, in the beginning, was an issue. They were using an Acne jacket [in season one], but then Acne wasn’t making the jacket anymore. So they told us to try eBay.”

Ritter’s character has been known to throw around cars and leap from fire escapes — both activities that run the risk of ripping a seam, which is why the Jessica Jones costume department has gone to incredible lengths to keep several backup jackets in their closet. After all, leather and denim are resilient materials, but they aren’t exactly, ugh, flexible. (There might be a reason so many heros are outfitted in latex — elasticity is key when you’re drop-kicking villains.)

Vastola describes the jacket as one of the most interesting and challenges items she’s ever had to source. “We’ve had them shipped in from Australia and from all around the world, just to sort of have it,” she explains. “Just so I feel like we have every single version, every single jacket in existence on this planet in our office.”

A used leather jacket is something you’d find in any local vintage store — and yet it’s treated with the same affection and care as Daredevil’s burgundy body armour or Thor’s cape. Jessica Jones, unlike many of her Marvel peers, is a flawed hero with real, raw human problems. Her metaphorical super suit is one that says to audiences: anyone can be a superhero, even those who don’t want it.

Marvel's Jessica Jones
Get the best of FASHION in your inbox Thanks for signing up!
The latest fashion, beauty and celeb news delivered right to your email #FASHIONforall Now, check your inbox to complete your subscription
We won’t ever use your email address for anything else
Want even more FASHION? Follow us on social media.