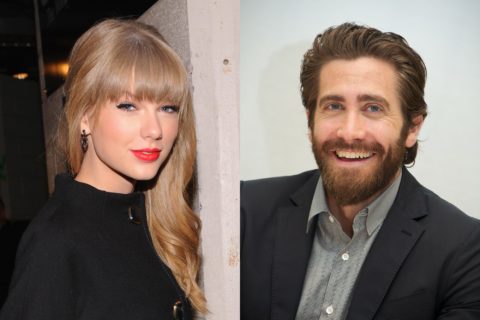 Jake Gyllenhaal’s latest interview is a perfect lesson in PR. If you want to get people talking about your new film, just name drop your super famous ex-GF in a plot related way.

Everyone’s talking about the actor’s viral video with Boston bombing survivor, Jeff Bauman, who Gyllenhaal plays in his new movie, Stronger. The film, which premiered at the Toronto International Film Festival to rave reviews, is a biographical drama about Bauman’s life as an international symbol of Bostonian bravery.

How exactly does Taylor Swift, who briefly dated Gyllenhaal back in 2010, fit into all this? “If you lost your legs in real life, do you think Taylor Swift would write a song about it?” Bauman cheekily asked during their interview to promote the movie.

When Bauman clarified: “For you – like a country song,” Gyllenhaal joked: “She sort of moved into pop now.”

There are plenty of other LOL-worthy moments in the interview — including Bauman asking Gyllenhaal why Ryan Reynolds didn’t play him instead — that you should check out. Someone should seriously give this duo their own late night comedy show.

But back to that T. Swift bit. The old Taylor (RIP) sang about her three-month romance with Gyllenhaal in her 2012 hit song, “All Too Well,” which means that five-years later the Oscar-nominated actor is still getting asked about the relationship. Typically, this line of questioning doesn’t go over well for reporters. When probed about his ex-lover by The Guardian, Gyllenhaal snapped: “I would love to not talk about my personal life,” which, of course, ended up being the headline for the article.

Jake isn’t the only Gyllenhaal still being questioned about Swift. His sister, Maggie, was recently asked by Andy Cohen on Watch What Happens Live about the location of a certain Swift-related scarf. (cc lyrics: “I left my scarf there at your sister’s house, and you still got it in your drawer even now.”)