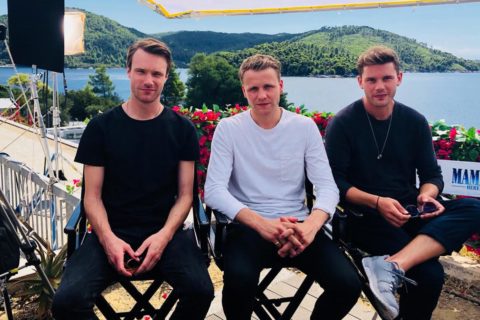 The Hot Young Dads of Mamma Mia! Here We Go Again Spill All

We recently jetted to the Mamma Mia island to celebrate the 10th anniversary of the original movie and the release of Mamma Mia! Here We Go Again (out this week on Blu-Ray). There we chatted with Lily James (who plays the younger version of Meryl Streep’s character) and Jessica Keenan Wynn (a.k.a. Baby Christine Baranski). So, it was only fair that we caught up with the young dads, too. We talked to Josh Dylan (playing the younger version of Stellan Skarsgard), Hugh Skinner (Colin Firth Junior), and Jeremy Irvine (wee Pierce Brosnan), about their nerve-wracking audition process, on-set pranking coups, and of course, their go-to ABBA karaoke jams.

What would you say is the most challenging part of taking on these roles?

Josh Dylan: This general sense of expectation, because the first film was so successful. You don’t want to mess it up and ruin the legacy.

Hugh Skinner: It’s a hat-trick of tricky things: singing, dancing, and pretending to be a more successful person than you. It’s the holy trinity of scary things!

Jeremy Irvine: The singing is so different from something I’ve ever done before. It’s a very scary thing. Me and Hugh did a lot of our auditions together, and you get put behind this glass screen in this soundproof room, with a microphone, and behind the glass is 20 very important people, and you start singing, and you just see one of them starts to shake their head, and you’re going, “What—is that bad? I don’t know!”

What surprised you the most about the experience of making this film?

Hugh: Someone said, “we all just want you to be really good friends,” and I thought, “oh, that’s so cheesy. We never will. We’re just going to work, we’ll all hate each other. We’ll get competitive, we’ll sabotage each other’s careers,” but, actually, everyone got on ludicrously well.

Josh: Speak for yourself. I’m planning to sabotage your career.

What was your funniest or strangest moment that you had on set? Was it the goat that menaces Donna and Sam during the falling-in-love montage?

Jeremy: The goat! The goat’s my favourite performance. You get a very detailed, nuanced performance, which was very clever—very, very clever, I thought, for a goat. I mean, obviously, that’s the goat from The Men Who Stare at Goats. He’s had a big career. He knows what he’s doing.

Josh: What’s next for him? Do you know what he’s doing next?

Jeremy: But we basically lived in apartments above each other by the beach, and it was just like being on holiday with your friends, so there was a lot of silly pranks.

What was the best prank?

Josh: Jeremy likes to think that he was the best prankster, but in actual fact, we got him so much better than he got us. We tricked him into thinking he had to do 16 bars of solo dance. So we all told him we’d been practicing, and you had to pick an ABBA song that wasn’t in the film. Jeremy was hungover, and miserable…

Jeremy: I was furious! I was walking down the pier, and I bumped into Pierce Brosnan, and I said, “Pierce, have you heard about this dance thing? Everyone knows about it but me, everyone’s prepared,” and he goes, “oh, yes, Jeremy,” and I was like, “this is fucking outrageous, and I’m calling my agent!” Started throwing a real fit.

Hugh: We have it all on film!

Jeremy: Yeah, and then they taught me a dance where I pretend to be an eagle…

Jeremy: …and just as I’m learning, doing my eagle dance, they all come out with cameras. So yeah, they had me at the end.

What is your go-to ABBA karaoke song and why?

Jeremy: “Dancing Queen,” because I’d like to think that I’m young and sweet and seventeen.

Hugh: “Does Your Mother Know,” because I’d like to try and do the move Christine Baranski does in the first film with her fingers, where she goes like that and her feet go kind of the opposite. It’s like a sort of a Rubik’s Cube of a dance move. Mesmerizing.

Josh: Unlike you, Hugh, sometimes I don’t have to rely on my dance moves to really get my point across, so I’d probably do a really slow one. I’d probably do “I Wonder,” but like really strip it down. I’d have some kind of really stark lighting. I’d probably be in a white loincloth or something, and I’d just sing it really slowly, a cappella. Actually, I’ve got my loincloth in my bag, so…