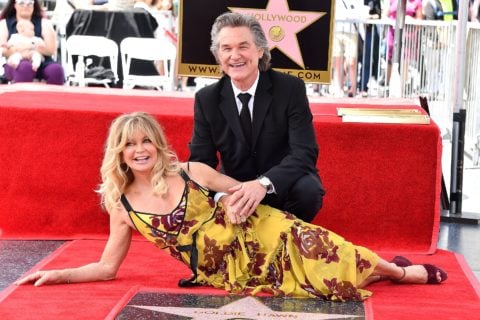 Hollywood’s golden couple, Kurt Russell, 66, and Goldie Hawn, 71, got as close as they probably ever will to a wedding ceremony yesterday, on May 4, when the two actors got their stars on the Hollywood Walk of Fame for their decades of work in cinema.

Hawn is famous for films like The First Wives Club and Overboard, while Russell is known for The Hateful 8, Stargate and Death Proof, among many others.

The duo, who’ve been together for 34 years, are parents to a blended family: actors Oliver and Kate Hudson (from Hawn’s previous marriage to musician Bill Hudson), Wyatt Russell (their biological child), and Boston Russell (from Russell’s first marriage to actress Season Hubley).

Joined at the ceremony by famous guests Kate Hudson, Reese Witherspoon and Quentin Tarantino, Hawn and Russell proudly accepted their stars, which come in alignment with their own movie releases. Hawn stars opposite Amy Schumer in “mom-com” Snatched (in theatres on May 12), about a daughter who takes her mom to South America following a bad breakup, her first film in 15 years, and Russell appears in Guardians of the Galaxy Vol. 2 (out today).

After Witherspoon gushed about her love for Hawn, Kate Hudson took to the podium to speak about her parents’ accomplishments.

“Some like to reduce such dedication to craft to words like ‘famous’ and ‘celebrity,'” she said. She says many people have asked her “What’s it like growing up with famous parents?”

“For me and my brothers, we grew up with artists. They put their heart into telling the stories that have become classics of our time, like…Escape from New York, Private Benjamin, and they just keep going and they just keep making them,” said Hawn’s doppelgänger daughter.

Hudson took the opportunity to joke that this is as close to a wedding ceremony as they’ll ever get. Instead of focusing on their accomplishments as actors, which might seem obvious, she went on to speak about their dedication to family.

“Their real legacy is what they have instilled in us kids. Our tribe that they have created, which they worked vehemently to protect and defend, the relationship they fiercely refuse to lose sight of together, and the deep feeling of love and nurturing they reserve for the most important thing we have in this life: family.”

With this, Hawn leaned into Russell’s shoulder as the waterworks began. A joint ceremony was so apt for these two lovebirds.