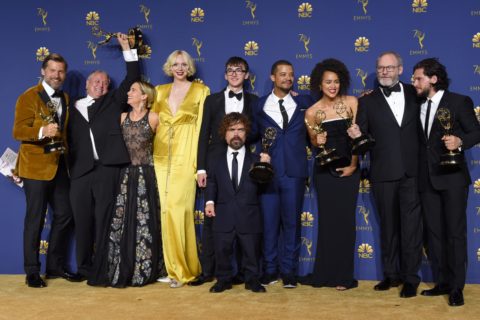 What Will the Game of Thrones Cast Do Next?

Where does one go after Westeros?

In two weeks’ time, the most significant television event of the decade will air its final episode. Not all characters will make it out of Game of Thrones alive, but thankfully, all of its actors will — and they’ll take their devoted fan following with them. This has been the nature of the series from the beginning: since season one, we’ve watched as the show unceremoniously (or in certain cases involving weddings and scheduled public beheadings, quite ceremoniously) killed off performers who then went on to secure successful acting gigs. Jason Momoa (Khal Drogo) became Aquaman and scored an Apple TV+ series; Pedro Pescal (Oberyn Martell) starred in Netflix’s Narcos and is now one of the most in-demand actors in Hollywood; and Richard Madden (Rob Stark) played Prince Charming and then took home a Golden Globe for his leading role in the BBC drama Bodyguard.

Now, with Game of Thrones coming to a close, its remaining actors are open for business. Here’s where you’ll see them next, and where we see them 10 years from now.

WHO HE PLAYED ON GoT: Jon Snow

WHERE YOU’LL SEE HIM NEXT: Nothing that we know of. However, with Ben Affleck hanging up his bat cape, Harington has been linked to the 2021 film The Batman.

WHERE WE SEE HIM IN 10 YEARS: Finishing up his decade-long superhero franchise. He’s got the grit, the brooding stoicism, and according to his IMDb, he has an open schedule. Plus, he once told Esquire, “I’d love to play Batman.”

WHO SHE PLAYED ON GoT: Daenerys of the House Targaryen, the First of Her Name, The Unburnt, Queen of the Andals, the Rhoynar and the First Men, Queen of Meereen, Khaleesi of the Great Grass Sea, Protector of the Realm, Lady Regent of the Seven Kingdoms, Breaker of Chains and Mother of Dragons

WHERE YOU’LL SEE HER NEXT: This upcoming holiday season, Clarke will star opposite Crazy Rich Asians’ Henry Golding in Last Christmas, a romantic comedy about a woman who works as an elf in a year-round Christmas shop.

WHERE WE SEE HER IN 10 YEARS: Emilia Clarke’s eyebrows have the same global impact as Julia Roberts’ smile. An entire generation of romantic comedies will be riding on the back of those bendy, bushy brows. And after a decade of crowd-pleasing rom-coms where she’ll charm Hollywood’s cold hearts, Clarke will transition back to prestige drama, where she’ll play a ferocious on-screen single mom. By then, however, her stubborn children will be humans rather than CGI dragons.

WHO SHE PLAYED ON GoT: Sansa Stark

WHERE YOU’LL SEE HER NEXT: She’ll star as Jean Grey in the upcoming X-Men blockbuster, Dark Phoenix.

WHERE WE SEE HER IN 10 YEARS: An Oscar winner. Sophie Turner takes after her X-Men costar and “big sister” figure, Jennifer Lawrence, in more ways than one: the perpetually juuling, wine-chugging 23-year-old is the world-famous actress every millennial woman wants to befriend. Post-Thrones and X-Men, Turner becomes a muse for a high-profile director who casts her in all of his award-baiting films.

WHO SHE PLAYED ON GoT: Arya Stark

WHERE YOU’LL SEE HER NEXT: Williams will appear on the big screen as Wolfsbane, a character similar to a werewolf, in the Marvel Comics X-Men spinoff film, The New Mutants.

WHERE WE SEE HER IN 10 YEARS: A multi-million dollar tech entrepreneur with her own late night talk show. At just 22, Williams has already launched her own company, a mobile app called Daisie that allows creatives to network, share and collaborate on projects within a social networking setting.

WHO HE PLAYED ON GoT: Tyrion Lannister

WHERE YOU’LL SEE HIM NEXT: Dinklage, the only Game of Thrones actor to have taken home an individual Emmy for his work on the show, will voice Mighty Eagle in The Angry Birds Movie 2.

WHERE WE SEE HIM IN 10 YEARS: A David Attenborough/Morgan Freeman-esque figure in the documentary scene. (The American actor will, however, be required to narrate all work with a British accent.) The X-Men, GoT and Avengers actor will also continue to appear in every major film franchise from now until infinity. Every movie benefits from a Peter Dinklage appearance.

WHO SHE PLAYED ON GoT: Cersei Lannister

WHERE YOU’LL SEE HER NEXT: Headey is starring in a film called The Flood alongside fellow Game of Thrones actor Iaian Glen.

WHERE WE SEE HER IN 10 YEARS: Starring in all your favourite indie dramas.

WHO HE PLAYED ON GoT: Jaime Lannister

WHERE YOU’LL SEE HIM NEXT: He’ll lead a crime/thriller film called Domino, which sees a Copenhagen police officer seeking justice for his partner’s murder.

WHERE WE SEE HIM IN 10 YEARS: Reviving Liam Neeson’s Taken franchise.