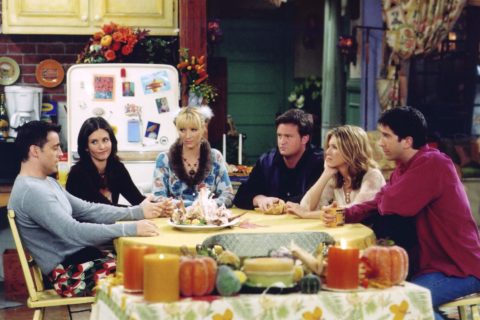 25 years after the show first aired, Friends is having its very first online auction of items straight from the set. Warner Bros Television, whose network the show aired on for 10 years, is teaming up with online auction company Prop Store to sell more than 100 props, costumes, replicas and other items from the iconic show’s decade-long run.

Every piece in the auction comes directly from the Warner Bros Archive with an original Warner Bros Certificate of Authenticity. Some of the items up for auction include Joey’s stuffed penguin Hugsy, Monica and Chandler’s wedding invitation set, and a reproduction of the famous Central Perk couch.

Variety has a short list of some of the items up for grabs, along with estimated sale prices (in USD):

“Prop Store is thrilled to be working with Warner Bros to auction some incredible material from all 10 seasons of Friends,” Brandon Alinger, COO of Prop Store said in a statement. “The series gave us so many laughs during its original run and continues to entertain and inspire fans around the world. It’s an honour to be able to bring some amazing original pieces to the fans, such as Joey’s original Hugsy doll.”

Proceeds from the auction, timed for the series’ 25th anniversary, will benefit The Trevor Project, a suicide prevention and crisis intervention organization for LGBTQ youth. The charity auction is timed for Giving Tuesday, a global generosity movement that falls on the Tuesday following American Thanksgiving every year. The auction runs online from December 3 to 17 at propstore.com/friends.

Photo by Danny Feld/NBCU Photo Bank
Get the best of FASHION in your inbox Thanks for signing up!
The latest fashion, beauty and celeb news delivered right to your email #FASHIONforall Now, check your inbox to complete your subscription
We won’t ever use your email address for anything else
Want even more FASHION? Follow us on social media.