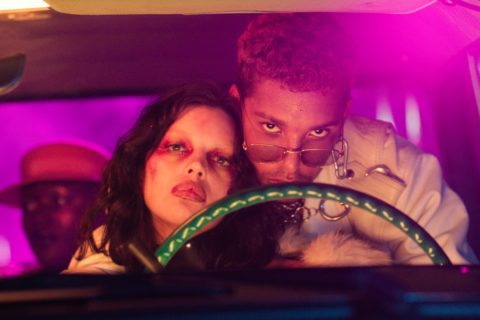 Fresh off the back of a standout set at Osheaga 2019 and the launch of her debut album lonesome, the new single comes ahead of her highly anticipated performance in Toronto this evening at The Velvet Underground.

Speaking with FASHION exclusively on the launch, laye says the song “is about the struggle of being confident in who you are. It is, in short, about loving yourself the way others love you but not based on how others love you.”

Its accompanying film clip (directed by friend and make-up artist Summer O’Grady) is full of striking visuals with a hauntingly beautiful gothic influence. It’s immediately evident that fashion is another medium through which the Roxboro, Quebec-born artist expresses herself. “I’m very specific in what I like to wear, mainly being focused on thrift,” the 23-year-old tells us. “In the earlier stages of working on music I wasn’t necessarily wearing clothes that I felt represented who I am. I took it upon myself to change that and style myself.” She describes her style as “a dress up box” saying that she prefers clothing that is representative of who she is. “Fashion, to me, is about dressing in clothes that make you – you. It’s less about following what’s trending and more about what one would gravitate to without focusing on what’s in style.”

We ask what her ultimate career goal is, and her answer is refreshingly authentic. “Being happy in what I’m creating,” she says. “I’m still getting there, but I have yet to produce a body of work where I’m like ‘that is me’. I have lots of time as I’ve only dropped one album and I am confident it will come.” She adds that she’s been working a little on her own production, too, “to get my own ideas across the way that I imagine them, both musically and visually.”

Catch the Canadian premiere of sicker below:

Can’t get enough? You can download and stream lonesome here.

Photograph by Summer O'Grady
Get the best of FASHION in your inbox Thanks for signing up!
The latest fashion, beauty and celeb news delivered right to your email #FASHIONforall Now, check your inbox to complete your subscription
We won’t ever use your email address for anything else
Want even more FASHION? Follow us on social media.