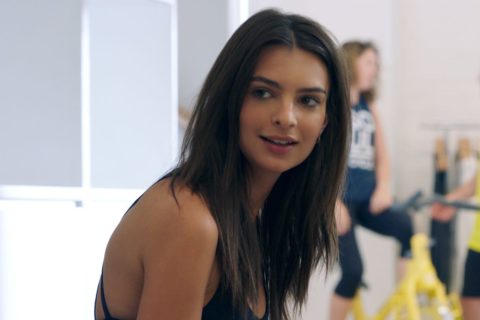 "Have you seen me in the morning after I’ve had too many glasses of wine the night before? Do you really think I’m beautiful?"

In I Feel Pretty, the new Amy Schumer flick that opens this weekend, Famous Beautiful Person Emily Ratajkowski plays a, well, a very pretty woman. The character might not be that big of a stretch for the model (and swimsuit entrepreneur), but that might be unavoidable for Ratajkowski. She looks the way she looks, what can you do?

That isn’t necessarily a rhetorical question, it’s kind of at the root of the film’s message. Regardless of how we feel we compare to shifting cultural beauty standards, the most important thing is how we feel about ourselves. It’s a lesson that Ratajkowski learned early on, and one she’s getting pretty good at explaining. Actually, she’s pretty good at explaining a lot things.

What was most appealing to you about this film? Was it the message, or cast, or something else I’m not mentioning?

Both of those things are true. Amy and I have a friendship and are mutual supporters of each other. I think we have a lot of the same ideas about life and women. Maybe we come at it from different angles, but we’ve always seen eye to eye on those things. So when she sent me the script, I was really excited to work on it with her. Because this really does have a special, cool message. And comedy, especially in the times we’re living in, is kind of an amazing opportunity to tell truths that are maybe harder to do in a dramatic way.

I’ve noticed that comedies are taking on a more social justice flavour.

It’s true. I was just watching Roseanne, and I thought, “this is completely amazing political messaging.”

I think people are really sick of talking about politics, and political issues in general, in a way that feels judgemental or judge-y. Comedy is one way people can see or share an idea without feeling like they are being preached to.

Speaking of judginess, New York magazine recently ran a story written by a former model. She talked about the challenges of being attractive. She said relationships—especially with other women—were always hard. What are the stereotypes you have to face?

First of all, I always like to say that women in general are always pigeonholed by the way they look, no matter how they look. It’s not really about being good looking, it’s a symptom of sexism that women tend to be judged more than men based on their attractiveness. It’s just a bad situation.

I’ve learned that the less I care what people think of me—as trite and obvious as this sounds—the more I’ve succeeded in personal relationships and in my career. People don’t really care about you. They mostly care about themselves and how you make them feel. The more you stop showing them that you’re overly concerned with yourself, they like you more. Especially with women; the minute you say, “listen, I really don’t care that men find me or you attractive, I just like you and see you as a person and not as a threat.” It breaks down those boundaries. But it sucks that you have to make a conscious effort to try to do that.

One of your big scenes happens in a locker room. I’ve never been in a women’s locker room, because I am a dude.

I had a suspicion you were.

What are your rules for locker room ettiquette?

How do you mean?

Good question. Sometimes I see dudes talking on their phones in the locker room, and I wish they wouldn’t, I think it’s inappropriate. Walking around completely naked, I’m mostly okay with, unless there is excessive bending. Lying down in the steam room, when clearly it’s meant for sitting…

It seems like this really hits a nerve with you. I don’t think I have as many rules. I kind of love being in the women’s locker room because it’s the one of the few times women don’t have to worry too much about their bodies. They can just dry off and shower and not think about it. I say the one thing is no eye contact. You’re making that person have to be aware of themselves, and that just doesn’t seem nice.

I spoke with another model who talked about how social media can be as painful as it is gratifying. You get a lot of fans, but people are also dicks. How do you deal with the negativity?

I don’t take the compliments too seriously, therefore I don’t have to take the negativity too seriously. I separate the really nice things people sometimes say on social media from real life. It makes it easier to ignore the rude comments.

Do you remember when you learned to do that?

It was gradual for me. It started was when I had my first serious boyfriend, when I was about 19. I remember him saying he felt stupid saying that I was beautiful because I must hear it all the time. And I remember thinking that that was such a crazy thing to say, you don’t understand that that doesn’t feel…when a photographer, or someone says something in passing, it doesn’t mean anything to me. Whereas when someone I care about, who sees me all the time, what they say really means something. Explaining that to him really made me realize it.

You just can’t seek that kind of validation from the outside world. Because, again, people just don’t care that much about you. Even when they are giving you a really nice compliment, it’s just a passing thing. If you care too much about that, you start to rely on that and that’s a slippery slope.

It takes someone of a specific stature for me to take a compliment. How do you decide who to believe?

I think it’s someone who has spent time with me in a real way, or maybe worked with me, or seen me in the capacity that they are complimenting me in. I’m one of those people where if you say, “ohmygod! I love you!” too early, I’m like “uh-huh, you don’t know me.” I’m basically the human equivalent of a cat.

I want it to feel real and earned. I think there is a difference when someone means something, and I can tell because they’ve seen me in that way. So, have you worked with me? Have you seen me in the morning after I’ve had too many glasses of wine the night before? Do you really think I’m beautiful?

Also, I would say that specific compliments tend to be better than general ones. When someone compliments me on something I haven’t noticed before, then I can really process it, you know?

You get thrown into films with some potentially intimidating people. Your first film role, you were directed by David Fincher, acting with Ben Affleck. Now you’re doing comedy with famous funny person, Amy Schumer. How do you get the confidence?

It’s definitely intimidating. I try to remember that I earned what I got. For example, on Gone Girl, I had to read for that four times. And there were a lot of other people working for the part. And I went into a room with David Fincher and Ben Affleck and a powerful casting director and I practiced for hours before I got in that room, and I did a good job. I got the part.

Women in general—and maybe all humans actually—tend to think, “Oh I’m so lucky!” whenever they get work. Definitely there is a certain amount of luck in everything, but knowing that you do deserve to be where you are is really important. That comes with being really hard on yourself sometimes, but that’s okay.