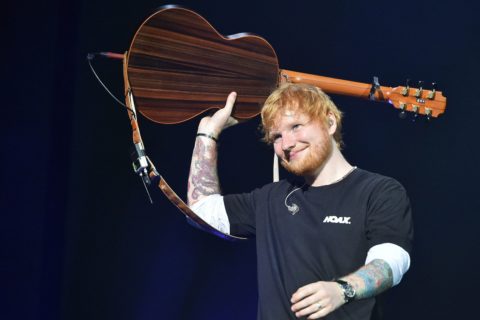 The news comes after his two-year long Divide tour

Ask any musician and they’ll tell you that as exhilarating as world tours are, they’re also incredibly tiring. And for Ed Sheeran, who’s been on his Divide tour for two whole years, enough is enough. For now.

Speaking on stage at the final gig of the tour, Sheeran told the Ipswich, England, crowd, “As you may or may not know, I’ve been on the Divide tour for over two years now and this is the last day of the whole thing. There is something very bittersweet about it. I love that you guys are here and we are ending it in Ipswich. This is my last gig for probably 18 months.”

He continued, acknowledging the mammoth scale of the tour, saying, “We’ve played all around the world. Glastonbury, Wembley Stadium. All these amazing venues, America, New Zealand, Australia, Asia, South America – it’s been a wild one. I was told before I came on that now at the end of this tour I’ve played to nine million people around the world. It is the biggest tour ever.”

Ending such a huge undertaking doesn’t come lightly with the singer likening it to a breakup. “It’s been an emotional day for a lot of people backstage. It kind of feels like, in a weird way, that you’re breaking up with a girlfriend that you’ve been with for years. It sounds odd but it has been a long tour.”

The tour grossed a whopping CAD$1 billion, making the Grammy Award winner the highest paid musician of 2018 and the tour the highest earning of all time. Sheeran takes the title from U2, whose 2009-211 360° tour was previously number one having grossed CAD$980 million.

It’s been a big year for Sheeran – in addition to the tour, he also wed longtime girlfriend Cherry Seaborn and released a new album, No.6 Collaborations Project, in June. The album includes collaborations with Stormzy, Camila Cabello, Eminem and more.

The news comes just one day after Taylor Swift shared the first details about her upcoming Lover tour.

Photo by Kommersant Photo Agency/Shutterstock
Get the best of FASHION in your inbox Thanks for signing up!
The latest fashion, beauty and celeb news delivered right to your email #FASHIONforall Now, check your inbox to complete your subscription
We won’t ever use your email address for anything else
Want even more FASHION? Follow us on social media.