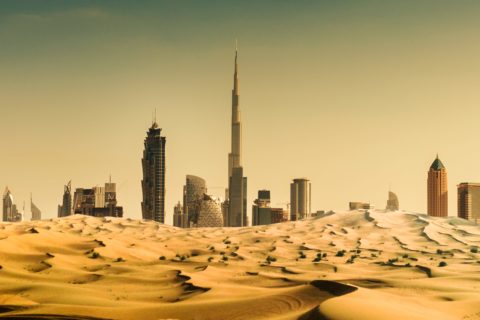 I fish the Dubai itinerary out of my carry-on and flip to a page titled “Common Arabic Phrases.” I can’t help but smile at the formal, grammatically perfect—and therefore utterly charming—suggestions, especially compared to the colloquial mishmash of Aramaic-Arabic-English I grew up speaking. “So this is what proper Arabic is supposed to sound like,” I think.

My first language is Chaldean Neo-Aramaic—specifically a dialect spoken by the citizens of Alqosh, a small town in Northern Iraq; it’s where most of my family lives, and it’s one of the few places where people still speak the biblical language. But I always heard Arabic when I was growing up—many people from Northern Iraq speak both languages—so I can get by.

What I cannot say is that I’ve ever been to the Middle East, so the prospect of being in the region sends chills the moment the opportunity arises. My parents fled Iraq during the Saddam Hussein regime—my mom in 1979 and my dad in the mid-’80s, after he was injured during his time in the military. I was born in Bulgaria in 1989; after a brief stint in Russia, we arrived in Canada in 1993 as asylum seekers. After many years, many rejections and many appeals, we finally became Canadian citizens in 1999.

Though, culturally speaking, I have always identified with Iraqi traditions, customs and languages, just the thought of going to Dubai (which obviously isn’t Iraq) makes me feel like I’m inching closer to the motherland. Dubai is also where I can pronounce “tahini” and “tabbouleh” like I do at home—which is, in case you’re wondering, “ta-KHIN” and “ta-pool-AHH”—without the fear of sounding pretentious.

Speaking of food, the hummus I sample in Emirates’s Business Class is not just excellent; it’s almost as good as my mother’s. I follow that up with a meze plate of Al Rahib salad (made with roasted eggplant, chopped tomatoes, onions and mint), stuffed vine leaves, sautéed spinach and chickpeas. It’s a vegetarian option that would put many Canadian Middle Eastern restaurants, let alone other airlines, to shame.

After landing in Dubai, I spy the departures screen while I’m waiting at baggage claim and see that a flight to Baghdad is leaving soon. More than 1,300 kilometres separate the two destinations, but it’s a short two-and-a-half-hour flight from here. I briefly fantasize about jumping on board and flying off to meet the dozens of cousins, aunts and uncles with whom I have had a decades-long relationship that exists only via Skype. Then I feel a sudden wave of guilt, tear up and quickly shake it off.

It’s a three-step routine that plays out regularly in my day-to-day life, thanks to a constant feeling of longing and homesickness for a place I’ve never been. That guilt is never stronger than during my time in Dubai, where I’m not only geographically close to Iraq but also surrounded by opulence and rooms literally coated in gold. Dubai features the type of extravagance you want to share with your loved ones, especially those who have lived—or still live—in drastically different conditions.

Only slightly larger than Sudbury, Ont., Dubai has three million residents and is located in one of the seven emirates of the United Arab Emirates (UAE). Positioned on the Persian Gulf coast and the edge of the Arabian Desert, Dubai has summers that are hot and humid. Nonetheless, aesthetically speaking, glamour prevails. The “no-makeup” makeup look of the West is non-existent in Dubai. Here, contour, intricately-filled-in eyebrows and smoky lids are non-negotiable—even, on occasion, for children. Dubai is predominantly a Muslim city, and many of the women I speak to tell me that their hijab—if they wear one—acts as the perfect frame for a full face of makeup.

Our guide, Nabil, originally from Syria, speaks more languages than I can list. He is also gracious enough to practise Arabic with me as we enter the five-star gold-drenched 215-room Palazzo Versace Dubai. Built to resemble a 16th-century Italian palace, this offshoot of the luxury fashion house has unobstructed views of the city skyline and is home to Enigma, where executive chef Mansour Memarian (whose work has previously earned Michelin stars for two restaurants) holds court. Enigma features intricate plates of modern Middle Eastern cuisine as well as elaborate cocktails, each inspired by a Persian poem. I sip mine as I sit on the restaurant’s patio and look out over Dubai Creek.

We visit the usual tourist suspects: the Burj Khalifa, gold and spice souks, The Dubai Mall, Burj Al Arab Jumeirah and a traditional hammam spa. But thanks to Nabil, we also find our way to a low-key shisha bar and the beautiful Arabian Tea House, located in the old Al Fahidi Historical Neighbourhood. It features the type of massive sun-soaked, plant-covered patio that in Toronto would be Instagram bait.

Nabil insists we order anything we want and as much as we want, so we do: several bowls of labneh (in my opinion, the creamy yogourt dip drenched in olive oil and a healthy sprinkling of za’atar should be more readily available than hummus), watermelon and feta salad, lamb chops, beef kebabs and skewers, fish and rice (always basmati with a dose of saffron) and cucumber, tomato and mint salad. Like most restaurants in Dubai that are not located in a hotel, alcohol—for religious reasons—isn’t on the menu, so we order watermelon and mango smoothies that are so refreshing they make me temporarily question the appeal of a glass of rosé.

After soaking up the warmth and comfort of hearing Arabic in cafés and on the street (as opposed to at a family gathering in Canada), I finally work up the courage to say a few things. I punctuate my falafel order with “shukran” (thank you) and “kifak” (how are you?), to the sheer delight of the servers, who just know I’m a tourist.

On our final night, we head to the desert for a sand-dune drive (not recommended if you’re prone to motion sickness) and camel ride followed by a dinner of shawarma and falafel served to us as we sit on carpets and pillows and take in a belly-dancing show under the stars. It’s a little gimmicky—and, make no mistake, you won’t find any locals here—but it’s still irresistible.

Dubai, with all its glitz and glamour, certainly isn’t the Middle East my family calls home, but it’s the closest I’ve ever gotten, in both distance and hospitality. So while my first trip to the Middle East made me want to see Iraq more than ever, I can’t help but feel nourished and somewhat close to home. Shukran.