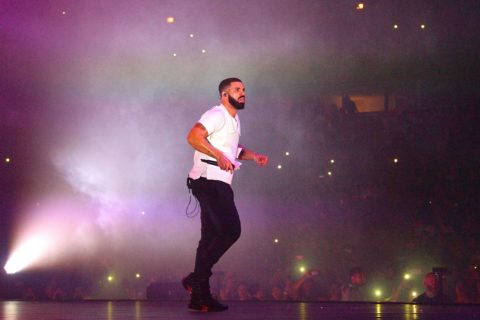 Drake Got Booed and Handled It Like a Champ

"I’m here for you tonight. If you want to keep going, I will keep going," he said to the crowd at the Camp Flog Gnaw music festival.

Last night, four-time Grammy Award-winning musician Drake was booed off stage. The singer made a surprise appearance at Tyler, the Creator’s Camp Flog Gnaw music festival in Los Angeles, but it seems fans had heard rumours that Frank Ocean would be the surprise headliner of the night and weren’t as enthused about Drizzy showing up instead. Soon into his set, boos and chants of “We want Frank” rose up from the crowd.

Incase you wanted to see Drake get booed off stage at flog gnaw… bruh pic.twitter.com/TgyqWvOZtq

Being booed by thousands of people is surely no pleasant experience—especially when you’re one of the most famous and celebrated musicians on the planet—but Drake handled it with grace. “I’m here for you tonight. If you want to keep going, I will keep going,” he said. When he heard more no’s from the audience, he shook his head and said, “It’s been love. I love y’all. I go by the name of Drake, thank you for having me,” before walking off the stage.

Later, YouTuber DJ Akademiks tweeted that he’d spoken with Drake, who said the incident had been a lesson in humility.

Drake is taking it in stride tho… he told me personally regarding the camp flog gnaw performance it’s a “moment of humility which is always welcomed”. He also added “was just not my night. Wasn’t who they wanted to see”.

Other artists who performed at the music “carnival” this year without incident include Blood Orange, Solange, FKA Twigs and fellow Canadian Daniel Caesar. Tyler, the Creator—the festival’s founder—seemed deeply embarrassed by the crowd’s response, tweeting: “Y’all represented me and Flog to my guest and made us look sooo entitled and trash.” In another post, he wrote, “That shit was like mob mentality and cancel culture in real life and I think that shit is fucking trash.” However, he also acknowledged that it might been “tone deaf” to invite Drake to perform at the festival, which draws a “specific crowd.” (This is how The Atlantic describes the discrepancy in musical styles: “Tyler and Flog Gnaw’s brand is colourful and punkish and opposed to all things serious. Drake’s is chilly and commercial and calculated.”)

I THOUGHT BRINGING ONE OF THE BIGGEST ARTIST ON THE FUCKING PLANET TO A MUSIC FESTIVAL WAS FIRE! BUT FLIPSIDE, A LIL TONE DEAF KNOWING THE SPECIFIC CROWD IT DREW. SOME CREATED A NARRATIVE IN THEIR HEAD AND ACTED OUT LIKE ASSHOLES WHEN IT DIDNT COME TRUE AND I DONT FUCK WITH THAT

Drake doesn’t always handle difficult situations with the greatest of maturity, but his graceful behaviour last night in the face of public (and inevitably viral) embarrassment is hard to fault.

Photo by Prince Williams/Wireimage
Get the best of FASHION in your inbox Thanks for signing up!
The latest fashion, beauty and celeb news delivered right to your email #FASHIONforall Now, check your inbox to complete your subscription
We won’t ever use your email address for anything else
Want even more FASHION? Follow us on social media.