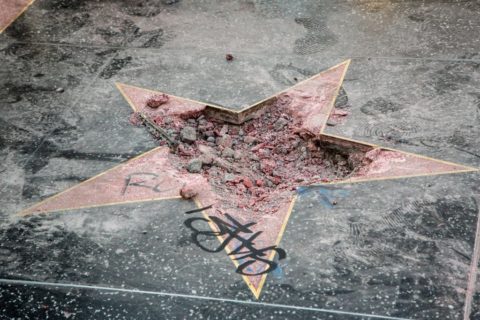 There's a debate heating up the Golden State

As with all things Donald Trump, people are divided. Earlier this week, the West Hollywood City Council unanimously voted yes on a proposal to remove the President’s star from the Walk of Fame. The problem is the Hollywood Walk of Fame is sort of out of their jurisdiction. The power lies instead with the Los Angeles City Council and the Hollywood Chamber of Commerce, which currently has “no plans” to remove that, or any other, star from the iconic stretch of LA.

“Once we receive a communication from the City of West Hollywood, it will be referred to our Executive Committee for consideration at their next meeting. As of now, there are no plans to remove any stars from the Hollywood Walk of Fame,” Leron Gubler, President and CEO of the Hollywood Chamber of Commerce said, reports Variety.

Given Trump’s, er, problematic world view, West Hollywood mayor John Duran hopes this might be the one exception.

“The West Hollywood City Council did not pass the resolution because Donald Trump is a conservative or a Republican,” he told CNN. “Earning a star on the Hollywood Walk of Fame is an honour. When one belittles and attacks minorities, immigrants, Muslims, people with disabilities or women—the honour no longer exists.”

He also noted that this was the first time the council had requested a star be removed from the Walk of Fame (despite some public outrage over Bill Cosby and Kevin Spacey’s still-intact stars, for example). “Never have we intruded into our neighbouring city’s business like this. But the circumstances compelled us to make an exception to the rule.”

The jury’s out. Lets see what they come back with.

Photography via Gabriel Olsen/Getty
Get the best of FASHION in your inbox Thanks for signing up!
The latest fashion, beauty and celeb news delivered right to your email #FASHIONforall Now, check your inbox to complete your subscription
We won’t ever use your email address for anything else
Want even more FASHION? Follow us on social media.