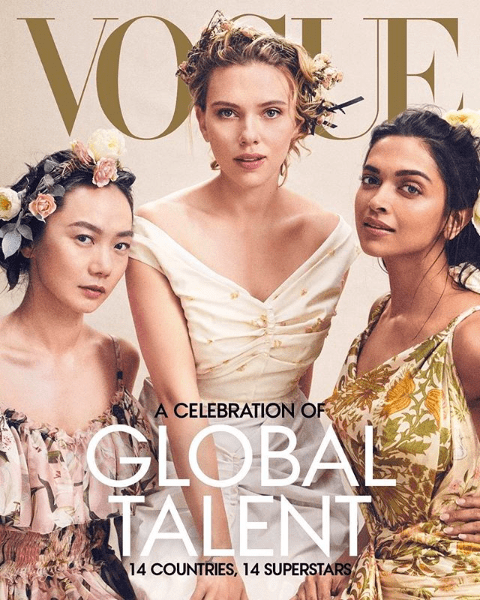 Who’s the Bollywood Actress On US Vogue’s April Cover? (It’s Not Priyanka Chopra)

Deepika Padukone appears on the cover of the magazine's Global Talent issue alongside Scarlett Johansson and Doona Bae.

2. You may have spotted her at the 2017 Met Gala, or in the pages of Vanity Fair or InStyle. She also recently unveiled her wax statue at Madame Tussauds in London. “When this opportunity came my way and they decided to honour me, I questioned the purpose as to what I was doing here and what was my contribution towards society,” she said to Hindustan Times. “The voice inside me said that I would like it to be a Statue of Purpose. So hopefully when people come here to see the attraction and when they see my figure there, they’ll be reminded of someone who had some sort of impact on society.”

3. Since her first Bollywood release in 2007, she’s starred in over 20 films, some of which are India’s highest grossing films of all time. In 2016, she landed on Forbes’ list of the highest paid actresses in the world, joining the ranks of A-listers like Jennifer Lawrence and Amy Adams. (She was the only Bollywood actress on the list.) Padukone is currently the highest-paid actress in India.

5. She’s one half of one of Bollywood’s most buzzed about couples. You may have spotted her beau Ranveer Singh at the Pharrell x Adidas Holi party (he’s one of the brand’s Indian ambassadors). They began dating in 2013, have starred in four films together, and finally tied the knot in an intimate ceremony at Lake Como in 2018.