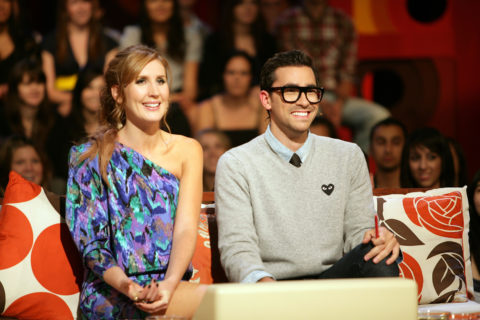 "Day One on the job and there's problems."

Back in 2009, when Schitt’s Creek wasn’t even a glimmer of an idea in the mind of Dan Levy, he arrived at FASHION headquarters in downtown Toronto for an “internship.” Working at MTV Canada at the time, as co-host of MTV Live and The Hills After Show, Levy’s brief stint at the magazine was filmed and televised as part of his reality series.

“I had the time of my life on MTV,” Levy told Out in 2015. “I was working at a video store before I got my job there. It brought me out of my shell. Being forced to talk to strangers every day will make anyone who is afraid of strangers kick that bad habit real fast.”

Some of the strangers Levy talked to at the FASHION office include former Fashion Market Editor Sarah Casselman and former Marketing Manager Karen Cleveland. The video may be over 10 years old but Dan Levy’s fashion sense and eyeglass game were strong even back then. In the clip, 2009-era Levy sorts through clothing in the FASHION closet, makes a run to Holt Renfrew for a shoe pick-up and gets an A- on his first task.

Watch Dan Levy at FASHION below:

And ICYMI—although, how could you—Schitt’s Creek came to an end this week with a series finale that reduced every single person watching to a puddle of tears. In honour of the show’s epic goodbye, we reached out to hairdresser Ana Sorys about how she and Catherine O’Hara put together Moira’s showstopping look, and to documentary filmmaker Amy Julia Segal about the process of shooting Best Wishes, Warmest Regards, the documentary that aired after the final episode.

Photo by Joe Scarnici/WireImage/Getty Images
Get the best of FASHION in your inbox Thanks for signing up!
The latest fashion, beauty and celeb news delivered right to your email #FASHIONforall Now, check your inbox to complete your subscription
We won’t ever use your email address for anything else
Want even more FASHION? Follow us on social media.