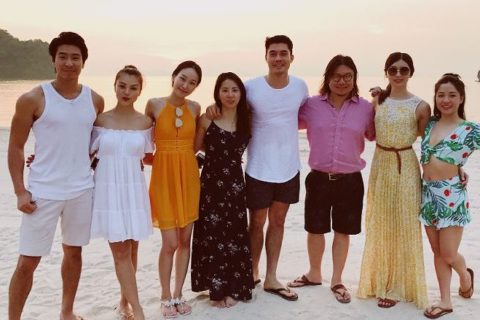 Loved by readers all over the world, the Crazy Rich Asians series has skyrocketed to book stardom that no one, including author Kevin Kwan, could have ever imagined. And now that the book is being made into a motion picture, Kwan is soon going to be a household name.

However, being an author wasn’t an easy career path for Kwan to take. Aside from getting flak from his family, in a Caucasian-filled publishing world an Asian man writing exclusively about Asian characters was out of the question. But Kwan felt that Asians were underrepresented and misrepresented in pop media and culture, so he decided that a change was in order. “No one was telling the story of modern, contemporary, fashionable, sexy Asians living their lives and having adventures and having dramas and having problems that have nothing to do with being Asian but, at the same time, everything to do with being Asian,” he says.

Recently making a pit-stop in Toronto during his Canadian book tour for his latest novel, Rich People Problems, the bestselling author told us about everything from his favourite character to his plans post-CRA.

He studied fashion photography at Parsons School of Design.

Little did we know, before Kwan became an author, he had his eyes set on being a fashion photographer, which explains the many phenomenal sartorial moments sprinkled throughout the book. “My mom always said I wasn’t born to shop, I was conceived to shop,” Kwan admitted. “Ever since I was a little kid, I always tagged along with her, her friends and her sisters as they went shopping around the world, so fashion has just kind of been in my blood my whole life, so it’s things I’m familiar with. I’ve always been a fan of fashion.”

He had a grand plan for all the characters since book one, especially for Kitty Pong.

“It was always intentional. Everything with all the characters, I’ve known the story since day one, like where I wanted to take them or how I wanted them to evolve, so I had plans for Kitty all along…. Within the stories, the characters really do begin to speak to you as you write them, so a lot of times the dialogue would change because I could really hear the voices, hear what they wanted to say…. I would still land at the end where I wanted to go, but the getting there would be this amazing journey in discovery.”

His characters are based on real people he knows.

“You can’t make this stuff up,” says Kwan, when asked if his characters were inspired by real people. “A lot were drawn from real-life, true inspirations. Some characters were made up of a lot of different people, but there are a few, like Kitty [Pong] and Eddie [Cheng], where you just can’t fake them.”

Out of all his characters, he relates to Rachel Chu the most.

“I do relate to Rachel in many ways because I’m also an outsider in this world. Whenever I go back to Asia, I really do feel like a fish out of water. And I’m looking at the world through her eyes and saying, ‘This is ridiculous,’ the amount of money people spend, the amount of money people have. It’s sort of out of reality from the rest of the world. So in that way, I feel really close to her.” But he did say that there are bits of him in all his characters, including the creative filmmaker Alistair Cheng, whom no one takes seriously because “he’s not a doctor, a lawyer [and he doesn’t] own a bank, and so he’s irrelevant. He gets discounted and gets treated like the dumb cousin, which I relate to, because I am the ‘dumb’ cousin.”

But his favourite character to write was Eddie Cheng.

“He’s fun to write; he’s larger than life. A lot of people love to hate him, but I love to love him because I see the insecurities of this person. I see what his flaws are. It’s so on the surface for him, what all this means to him. His insecurities, his snobbish-ness, come from this really deep place of not being a Young [a.k.a. the richest and most well-respected Singaporean family name in the books]. It’s his last name. It frustrates him. He’s born a Cheng and not a Young. So I just think that’s a fascinating character.”

Every single food mentioned in the book is considered a favourite of his.

“Readers could really see there are a lot of noodles, because I love noodles—all types of noodles.” However, he also does make fun of a lot of culinary trends “like molecular gastronomy and the more ridiculous food trends out there. [I] try to parody them because you do see that in the fancier restaurants in Asia.”

He’s going to take some time off after his book tour to just read, and he wants to write a TV show.

While Kwan definitely plans to write more books, he needs a little break right now. Given that he did write three books in five years, it’s a well-deserved timeout. “It’s just kind of exhausting, so I need a little time to think about what the next book is going to be about.” However, it looks like he’s only taking a break from the book world.
“In the meantime, I’m writing a TV show,” he tells us. “I’m producing and writing a one-hour drama for television.” Although he couldn’t disclose what it’s about right now, we know we’re going to be on the edge of our seats until the news breaks.

He knows his characters very well.

We thought we’d test the author on how well he knows the famous characters. Like he said, “to prove if he really wrote it.” Watch our Facebook Live below to find out.