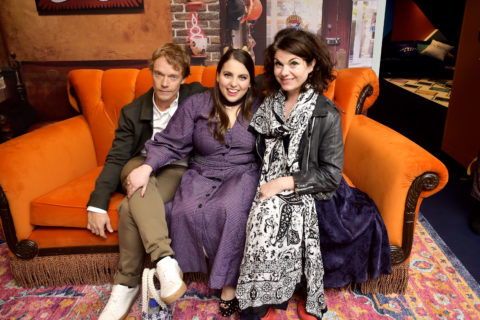 Caitlin Moran on Adapting Her Novel, How to Build a Girl, Starring Beanie Feldstein

"I don’t want to torture girls. I don’t want any more dystopian fiction for teenage girls."

These days, Caitlin Moran is all about positivity. It wasn’t always that way. As a teen, the British journalist/novelist got her break cutting down bands as a famously acerbic rock critic – “I became unbelievably vicious,” she admits. It’s an experience she’d turn into a semi-autobiographical best-seller, now a feature film starring Beanie Feldstein, Alfie Allen and Emma Thompson. Following How to Build a Girl’s premiere at last fall’s Toronto International Film Festival, FASHION sat down with Moran to talk about casting Beanie as her “rock dick” alter ego, adapting her own novel, and choosing positivity over cynicism.

I’m not sure if you know, but Beanie Feldstein was on the cover of FASHION recently.

Because she is the thing, isn’t she? I went to the London premiere of Booksmart, and the atmosphere when she walks into a room… She’s transcended really quickly.

When did you know she was the right person for this?

The minute they rang up. We started developing this around about the year 1753… Making a movie takes so long! I’m a journalist and I’m a writer, so I’m used to like, [snaps fingers]. And I didn’t realize when we first started adapting the [book] that it would be almost impossible to make. Because to cast someone who’s playing a big, working class 16-year-old girl who can play optimistic and cheerful, but is really funny, turns into this massive diva, goes completely Vader, but is also doing sex scenes that are funny, walking around in a bikini made of a bin bag… I didn’t realize that basically no one can do that? At one point, we were going, “Should we get Judi Dench to do it with CGI? Like The Polar Express, where you just use the eyes?” If Beanie hadn’t been invented, we’d be absolutely f*cked. It’s Beanie’s movie.

Was it always the plan for you to adapt this yourself?

Yes! Ridiculously, because I’d never written a script. When we started Day One, I was just like, “How do you write a script? Literally, what do you write it on?” The hardest thing for me was concentrating on plot. If you’re going to do a traditional plot, [Feldstein’s character Johanna] would suffer more. Her low point would be where she was humiliated or disgraced. But I don’t want to torture girls. I don’t want any more dystopian fiction for teenage girls. I want them to watch a movie where her biggest problem is that she’s kissed the wrong person and she’s been horrible to a couple bands and then she learns from her mistakes.

This story is loosely based on your own life. What were some of the things you learned?

I started off as a very optimistic, loving journalist. And it became clear to me very quickly that [in] the music press… you [had to] put on this cool, hard, black carapace of being cynical. But the thing about wearing that armour is that, after a while, it becomes incredibly restrictive. You cannot grow in it. You cannot dance in it. You are doomed to a really unhappy life. Until you have the balls to go, “No, I’m going to reclaim my optimism and joy. I’m going to be for things.” That, I think, is the best attitude you can have in the world. There’s so much horrible stuff. Don’t concern yourself with that. Just point at the good things. There’s enough people retweeting awful people – in politics, everywhere – and that just becomes depressing. The world is full of joy. Let’s just point at the good stuff.

Do you feel the tide is changing though? It seems like as a culture, we’re slowly turning away from celebrating cynicism.

I feel like it’s playing out. First of all, all the terrible people have now declared themselves. I feel like this is the high tide for [them]. And when the tide pulls back – which it does, because everything goes in cycles… That’s the period when new people can step forward and go, “Let’s try this a different way.” That’s why I write the books I do and make the films I do. To go, “There’s other ways of doing this. These are the kinds of people we should think are great.” We should basically all worship Beanie Feldstein and Emma Thompson, and that would be a better world. [Laughs.]

How to Build a Girl will premiere digitally and on VOD via IFC Films on May 8. This interview has been condensed and edited.

Photo by Stefanie Keenan/Getty Images for AT&T
Get the best of FASHION in your inbox Thanks for signing up!
The latest fashion, beauty and celeb news delivered right to your email #FASHIONforall Now, check your inbox to complete your subscription
We won’t ever use your email address for anything else
Want even more FASHION? Follow us on social media.