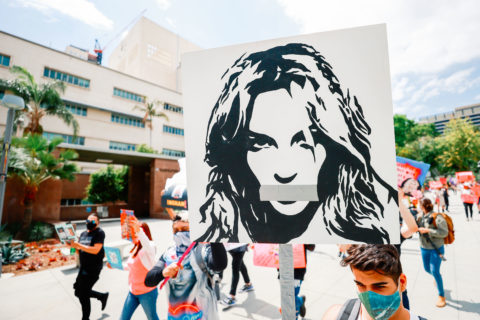 Her newly appointed counsel will be “aggressively” pushing to remove her father from the conservatorship.

In a major win for the #FreeBritney movement, a judge granted Britney Spears’s request to hire her own attorney in the ongoing battle concerning her 13-year conservatorship. The decision was made on July 14, in a Los Angeles hearing where Spears addressed the court by phone. The 39-year-old pop star said wants her father and co-conservator, Jamie Spears, not only removed from the conservatorship but also charged with conservatorship abuse.

BREAKING 🚨 The judge has approved Britney Spears hiring her own lawyer for her conservatorship case!!! #FreeBritney pic.twitter.com/ja4oYluyd2

This hearing was the first since her viral court appearance on June 23, where Spears made a 20-minute statement calling the conservatorship “abusive,” and accusing her family and members of her team of using it to control and exploit her. Following the internet’s reaction to her explosive testimony, many who were suspected of involvement in the conservatorship have sought to distance themselves from it. Among recent resignations are Bessemer Trust, a wealth and investment management firm that was appointed as co-conservator in August 2020; Larry Rudolph, Spears’s long-time manager; and Samuel Ingham III, the star’s court-appointed lawyer.

After last month’s hearing, Ingham faced backlash for having reportedly advised Spears not to speak out about the conservatorship. He is also suspected of participating in it, with The New Yorker citing a source who said Ingham was more loyal to the conservatorship and to Spears’s father than to Spears herself. Thanks to the July 14 decision, Spears is moving forward with new legal representation of her own choosing: former federal prosecutor Matthew Rosengart.

Rosengart, who has represented high-profile celebrities like Steven Spielberg and Sean Penn, said he will be “moving promptly and aggressively” to remove Jamie Spears from the conservatorship. In court, he questioned the validity of the arrangement and said he and a team of attorneys from his firm would be looking at the details and examining why it was implemented to begin with back in 2008.

“The question remains: why is he involved?” said Rosengart of Jamie Spears’s role as co-conservator. “He should step down voluntarily, as that is in the best interest of Britney Spears.”

“We will be moving promptly and aggressively for Jamie Spears’ removal” — Matthew Rosengart pic.twitter.com/y9bvlLv5JR

Spears reportedly broke into tears at the end of her testimony, where she revealed more shocking details about the conservatorship. She described being denied basic requests like coffee, vitamins for her hair, and access to her driver’s licence.

The singer declared that she wants the conservatorship to end immediately without having to undergo any more “stupid” evaluations. She described feeling “extremely scared” of her father and said she felt those involved in the conservatorship were trying to kill her. “If this is not abuse, I don’t know what is,” she said. In court, Jamie Spears’s lawyer Vivian Thoreen denied these claims, saying that he has always had his daughter’s best interest in mind.

After the July 14 hearing, Spears took to social media to celebrate her victory. She posted a video of stitched-together clips showing her doing cartwheels and riding a horse. “New with real representation today … I feel GRATITUDE and BLESSED !!!!” she wrote in the post’s caption. “Thank you to my fans who are supporting me … You have no idea what it means to me be supported by such awesome fans !!!! God bless you all !!!!!”

Pssss this is me celebrating by horseback riding and doing cartwheels today 🤸‍♂️🤷‍♀️🐎 !!!! #FreeBritney

She ended the post by writing “#FreeBritney,” which is the first time the star herself has used the hashtag dedicated to her on social media. This public acknowledgment of the movement represents a shift in Spears’s presence on social media, which has long been questioned by fans for being overly curated, fake-seeming, and at times outright bizarre. After last month’s internet-breaking hearing, Spears took to Instagram to “apologize for pretending like I’ve been ok the past two years.”

Now equipped with legal counsel of her own choosing and more liberty to speak out about her conservatorship, Spears is making a significant stride toward freedom — and hopefully justice.