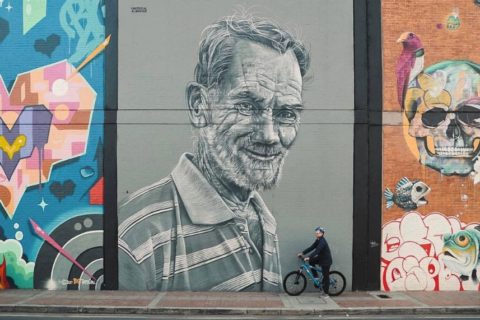 When I was planning my trip to Colombia, just about every guidebook, travel blog and nomadic friend told me to skip Bogotá. People I knew who lived in Bogotá called it the country’s ugly stepchild. Which, I almost understand: with the 2016 peace treaty between the Colombian government and rebel groups in place, tourism in the country is booming. And the warm people of Colombia want to show off the best their country has to offer. (In the same way that, if someone was visiting Canada, I’d tell them to go to skip Toronto and head to Montreal and the mountains.)

The places everyone tells you to visit are Cartagena, the colourful colonial jewel on the Caribbean coast, and to Medellín, the Pablo Escobar stomping-ground-turned-trendy-yuppie-paradise. And, to be fair, there’s a good reason why. I ended up following the popular backpacker path—which took me to Cartagena, Santa Marta, Tayrona National Park and Buritaca—where I fell head over heels with the vibrant Colombian country, culture and people. But to get to the land of hip hostels and carefree vagabonds, I had to fly through Bogotá. And despite what I’d been advised, I felt it’d be a miss to fly through Colombia’s capital city and not to step outside the airport.

I spent less than 36 hours in the city, but here’s what I learned: know where to go, and you’ll discover Bogotá to be an urban centre of culture that oozes all-things cool. Here are a few of the highlights:

A living wall, a trendy rooftop burger joint, a front desk agent who resembles Salvador Dali and NSFW in-room gifts? The Click Clack is truly no ordinary hotel. From the moment you step through the front door, you embark upon a constantly evolving experience underpinned by the hotel’s core creative concept: Bangsequence. Inspired by Newton’s third law – action/reaction – Bangsequence is about triggering thoughts, actions and interactions that will change how you perceive the most everyday of objects and routines. I’ve stayed in a lot of hotels, and this one was, hands down, my favourite.

Drive an hour north of the city centre to Chía, and you’ll find Andrés Carne de Res, a Moulin Rouge meets Alice in Wonderland destination Latin steakhouse that fits 4,000 guests who, on weekends, rumba until the early hours of the morning. I haven’t been, but I’ve heard it’s a pretty serious trip. Instead, I spent my sole dinner in Bogotá dining solo at the urban off-shoot of the infamous party spot, Andrés D.C., conveniently located minutes away from the Click Clack Hotel.

The brand’s city dining space is named after Dante’s “The Divine Comedy,” and its four floors themed for Infierno, Tierra, Purgatorio and Cielo. The more is more extends from Hell to Heaven, and to the on-stage performances, table-side character visits and 76-page menu. It’s a lot, but in the best way possible. (Plus, the food was excellent.)

If you’re strapped for time, my suggestion is to skip the popular Museo del Oro, and instead head to Bogotá’s cluster of art museums. In 2004, a new architectural complex opened to the public in Candelaria, Bogotá’s bohemian historical centre, and it brought together the Luis Ángel Arango Library, the Numismatic Collection, the Banco de la República Art Museum and The Botero Museum.

The Botero Museum, which houses one of the most important  art collections in all of Latin America, is the spot to hit first. The museum features 123 works from Fernando Botero, the Colombian artist who’s iconic distorted “fat figures” can be found everywhere from Park Avenue to the Champs-Élysées. His museum is, as one might predict, unmissable. The Banco de la República Art Museum, however, will come as a bit more of a surprise. The art museum holds a number of rotating exhibits that feature Latin American contemporary works, such as the shipping containers showcased in the above photograph. And best of all? It’s all free and open to the public.