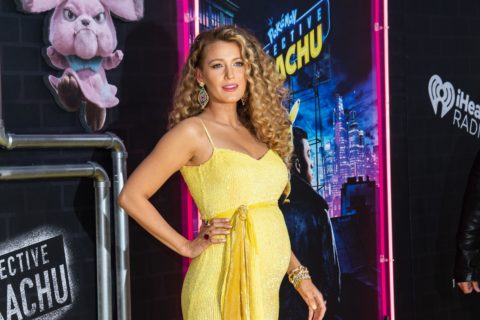 These are Lively's "baby essentials", apparently

Blake Lively is an excellent secret keeper. Not only did she keep her third pregnancy under wraps until she was pretty far along (the bump made its debut at the Detective Pikachu premiere back in May), the star also reportedly gave birth to said child almost two months ago. Nothing has been confirmed by the notoriously private couple (both Lively and husband Ryan Reynolds have spoken about how they want their kids’ to have as normal of an upbringing as possible), however the Sisterhood of the Travelling Pants actress has revealed some baby-related news today. Specifically, her Amazon baby registry.

The registry has been broken down into eight categories: Diapering, Out & About, Sustainable On-The-Go Essentials, Nursery, Feeding, For Mom, Bathtime and Baby’s Library. The list includes a bottle warmer, nursing pillow, swaddle blankets, a car seat and more.

On the registry, Lively wrote, “I understand how overwhelming it is to be a new parent. What they don’t tell you is it never gets less overwhelming, but with each kid I do learn more. Before I had my first, I was lucky to have the parents in my life who I trusted to share their ‘must-haves’ with me. I hope to do the same for you with my baby registry picks. Good luck! You’re gonna need it.”

Proceeds from items purchased from the list will be donated to the Child Rescue Coalition which Lively describes as “an organization that is doing such important work in protecting our children worldwide.”

Speaking with People about the registry, Lively also joked about her maternity style calling it “comfortable, comfortable, comfortable in real life and unrealistically awesome when I have to do press. But that’s only a couple of days a year, if that. I really raise the bar for myself, then it’s back to pajamas, onesies and disappointment.”

This is the second celebrity registry to go live on Amazon in as many months. Last month, Jennifer Lawrence shared her wedding registry on the site. It came following increased speculation she had married fiancé Cook Maroney. Is this the new way for celebs to confirm life-changing news, perhaps?

Photo by Mark Sagliocco/FilmMagic
Get the best of FASHION in your inbox Thanks for signing up!
The latest fashion, beauty and celeb news delivered right to your email #FASHIONforall Now, check your inbox to complete your subscription
We won’t ever use your email address for anything else
Want even more FASHION? Follow us on social media.