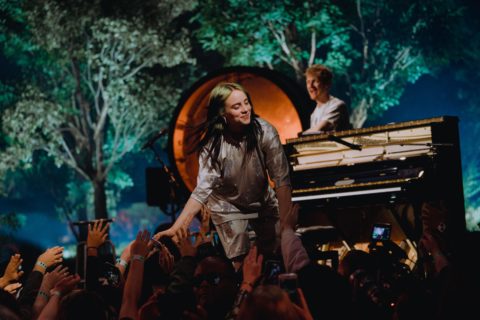 The 17-year-old celebrated her wins with a special performance in California.

Apple feted the launch of its inaugural Apple Music Awards in Cupertino, California, overnight with a special performance from Billie Eilish.

The talented 17-year old was crowned Artist of the Year, after being hand-selected by Apple Music’s global editorial team of experts and tastemakers. According to the company, Eilish was chosen for her true passion to her craft, defying conventions in the category and embodying a sense of humanity, drawing listeners in with both her music and her persona. Plus, her album When We All Fall Asleep, Where Do We Go? nabbed Album of the Year after being streamed over one billion times. Along with her brother Finneas, who co-writes all of Eilish’s songs, the artist also received the Songwriter of the Year award.

Ahead of an intimate performance at Steve Jobs Theatre in California, Eilish told Zane Lowe, Apple Music’s Global Creative Director, in a private chat attended by FASHION and only a handful of other global media, that the most fun aspect of her job is “the satisfaction of having people trust me.” The 17-year-old wore a custom grey ensemble from Artica-Arbox, accessorized with six diamond rings, shades and her signature neon green-topped hair for the sit-down.

The singer also opened up about the struggles she’s faced since catapulting to fame in the past year, revealing she was “clinically depressed for a few years.” She spoke openly about feeling shut off from her own success and that she was the last person to realize that she’d made it. When asked by Lowe how she found a lightness, Eilish said, “I was patient with myself and my surroundings.” Lowe then asked what advice she’d give others who might also be feeling this way, to which she said, “Just be patient, that’s all I can say. I don’t know what else I did. I was just patient.”

Eilish was joined on stage mid-way through the conversation by Finneas (wearing a black shirt with a faint leopard print, trousers, shiny patent brogues and Gucci socks), and the pair’s chemistry is immediately palpable. It’s clear he helps ease any nerves the 17-year old might be feeling. “He makes me laugh,” Eilish answered to Lowe’s question of what her older brother gives her when she really needs it. For Finneas, he described Billie as “a tether in the storm of what we’ve had the good fortune to go through together over the last year.”

The pair talked about their writing process, and how it’s been forced to evolve from writing songs in their bedroom. When asked what the strangest place they’ve ever written a song is, the pair shared a story about being in the tour bus in a parking garage with the air conditioning and lights off with Eilish doubled over on one of the bunks. “I feel like we can write anywhere now,” she says.

Later, the conversation turned to Avril Lavigne. “She represents punk,” says Eilish when asked what the Canadian musician means to her. “I feel like everybody owes her a thank you for what she did for an entire world of people of all ages. Even though I was like four when a lot of her music was big, she proved that you can just be you.”

It seems almost pointless to highlight how big of a year this has been for the teen, given that she’s a household name. And for the time being, she’s taking the time to enjoy where she’s currently at – and that means a new album is not forthcoming. “The energy is starting, but we’re not making an album,” she said, strongly emphasizing the last part. “We’re just making songs.”

Fast forward a couple of hours later and Eilish (accompanied by Finneas) took to the stage to perform a 75-minute long acoustic set of 16 songs. The set opened with Ocean Eyes, and Eilish’s humour/laid-back attitude was on display at the song’s end when she attempted a note before pulling away from her mic, and saying, “Nope” much to the delight of the crowd. This sense of normalcy continued throughout the set, with the singer chatting with her fans in between songs, laughing it off if she messed up and telling her brother to start the next song. Her appreciation of her fans was clear – at several points throughout the show she thanked them for their support and at show’s end, she ran to the edge of the stage to high five and hug those who were close.

Lowe appeared on stage again to present Eilish with one of her three awards – Artist of the Year – noting that it seemed fitting that Eilish (who at this point was lying on the ground) would be surrounded by her fans as she received the honour.

If this is only the beginning, there’s no telling how high this star is going to rise.

Photograph courtesy of Apple Music
Get the best of FASHION in your inbox Thanks for signing up!
The latest fashion, beauty and celeb news delivered right to your email #FASHIONforall Now, check your inbox to complete your subscription
We won’t ever use your email address for anything else
Want even more FASHION? Follow us on social media.