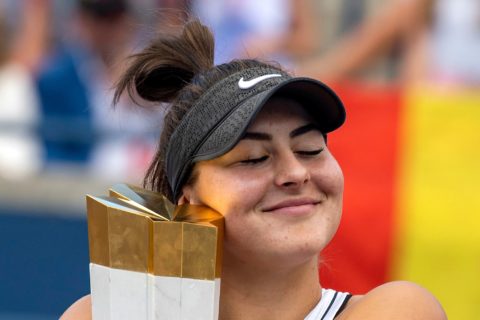 "She's an old soul... She definitely doesn't seem like a 19-year-old," says her opponent Serena Williams.

If you’re not already familiar with all-star tennis player Bianca Andreescu, her recent victory at the Rogers Cup should put the name on your radar.

In the final match between 23-time Grand Slam winner Serena Williams, Mississauga-born Andreescu had the lead of 3-1 but the game ended prematurely when Williams called for a medical timeout on account of her painful recurring back spasms. But it’s not just the 19-year-old’s sudden win that left Canadians and tennis lovers in awe, but the sportsmanship and grace that Andreescu showed towards the veteran player. After the umpire announced that Williams would retire from the match due to injury, Andreescu ran over to console her opponent, overlooking the fact that she had just grabbed the victory title.

“I started tearing up because she was tearing up,” said Andreescu. “It’s because I know how she feels. Injuries really, really suck.”

Her empathy earned her scores of fans around the world, including Williams. “She’s an old soul. She’s only 19. She definitely doesn’t seem like a 19-year-old. Her words on the court. Her game. Her attitude. Her actions,” said Williams during a post-match press conference in Toronto. Williams also said that the young champion was the highlight of her Rogers Cup experience, due to the maturity and sportsmanship with which she handled the match.

Andreescu’s win marks the first time Canada has welcomed home the cup since Faye Urban’s win in 1969, when the tennis tournament was still known as the Canadian Open.

“I was excited to win it back then, but I didn’t realize how important that would be until it took 50 years for another Canadian woman to win it,” Urban told the The Globe and Mail.

The significance of the historic win isn’t lost on Andreescu.

“[The Rogers Cup] is at home,” she said, post-victory. “I’ve dedicated so much hard work and sweat on that tennis court and in this gym, so this tournament is definitely ten times more special.”

At just 19 years old, with two WTA Premier titles, and praise and admiration from Serena Williams, we’re not sure what else is on the agenda for Andreescu but we know it won’t disappoint.

WARREN TODA/EPA-EFE/Shutterstock
Get the best of FASHION in your inbox Thanks for signing up!
The latest fashion, beauty and celeb news delivered right to your email #FASHIONforall Now, check your inbox to complete your subscription
We won’t ever use your email address for anything else
Want even more FASHION? Follow us on social media.