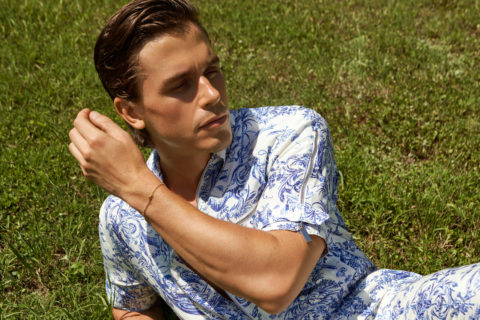 For Queer Eye’s Antoni Porowski, the recipe for happiness includes equal measures of ease and adventure.

Please note this interview and photo shoot with Antoni Porowski for FASHION Canada took place prior to the historic events and peaceful protests that have occurred over the past several weeks.

“I’ve cooked more in the past six weeks than I have in the past 2½ years. That’s been the silver lining to it all.” Antoni Porowski, the 36-year-old food and wine expert for the hit Netflix series Queer Eye, is describing his current (quarantine) status in relation to the pop culture juggernaut he has found himself on. Porowski spoke to us in April from an Airbnb in Austin, Tex., where he’d been holed up since the lockdown began. His much-loved show, which launched its fifth instalment of episodes in June, was just beginning to film another season in the southern metropolis before everything came to a standstill.

Porowski, who hails from Montreal, says he has used the isolation time to “lead a much simpler life.” And it’s undoubtedly much needed; he and his co-stars have had an intense few years, with each of the five personalities going from relative anonymity to the kind of superstardom that saw them host Elton John’s Oscars-night viewing party this year. It was a major pinch-me moment for Porowski, who recalls the “beautiful burgundy Zegna couture tux” he wore to the annual AIDS fundraiser. “I was standing there thinking, ‘Elton John is performing right now and I’m four feet away from him.’ I felt a chill go down my back. And I couldn’t sleep that night because I wanted to remember every sensation and moment of the night.”

That L.A. evening must seem like a lifetime ago now, and Porowski—who is typically based in New York City—has switched his focus to less star-studded but no less admirable networks, making the most of the local flavours (pun intended) that he’s surrounded by. “I got obsessed with this new app called Vinder,” he says about an Austin-based digital hub that connects restaurants and home cooks with local agricultural businesses. “I’ve been ordering all kinds of farm goods. In some ways, I’m living my best Martha Stewart or Ina Garten life.”

It’s not hard to conceive of Porowski following in the footsteps of such legendary lifestyle gurus. His first cookbook, which was released last year, touts the appeal of easily achievable cooking for people who are “too busy to make dinner.” That describes plenty of the guests made over in each episode of Queer Eye—“heroes” as they’re dubbed on the show—so Porowski has become an authority on getting people excited about uncomplicated food, be it chicken Milanese or mac ’n’ cheese. (Both recipes are found in Antoni in the Kitchen.) “We’re given so little information about the heroes,” he says. “I always come up with 10 different recipes to teach them. Then I meet the person and realize that some people want to be taught and they want to expand their palate. And other times, it’s really just helping someone do what they already do but more efficiently.”

Porowski inspires people from many walks of life through an approach that favours connection over pontification. “I do my best not to come in and be preachy because for anybody who’s ever tried to be preachy with me, it never really falls well,” he laughs. This gentleness in spirit translates to Porowski’s own philosophy about eating, which he says is rooted in a harmonious mix. “It’s about listening to your body,” he says about how he navigates a love of noshing with taking care of his well-being, noting that he’s just as much a fan of fried chicken as he is of raw beets. “I think balance is the key.”

These complementary contrasts are found in Porowski’s closet, too. Favouring a “uniform of a nice pair of jeans and the perfect white T-shirt” (the kind that come from brands ranging from The Row to Sunspel), he’s had to amplify that covetable nonchalance since starting on the show. “When we got our mood boards for Queer Eye and specific visuals in terms of what they wanted us to lean into, for me it was ‘We want the James Dean look.’ I thought: ‘OK, how do I make it a little different? What am I going to do?’”

Pops of his personality have come from the brightly hued vintage bandanas around his neck—ones he would typically wear around his hairline while taking a run—and the quirky message shirts he’s now known for. Tees from his favourite musical acts are rooted in watching bands like Arcade Fire rise to fame in Montreal’s thriving music scene. “You can tell a lot about a person from their taste in music—kind of like food,” he says.

His selection of non-music-related tops—which includes a T-shirt that boasts the names of influential women in the art world, like Louise Bourgeois and Yayoi Kusama, and one featuring the logo from Montreal’s Expo 67, a nod to his hometown—also tells us so much about Porowski (an avid art and design fan) without him uttering a word. “I think that’s a Canadian sensibility,” he says. “I’m not an aggressive person. I like to do things sort of covertly.”

Within his collection there are some pieces that retain a special sentiment that begs to be shared, in particular a handmade cashmere sweater from California-based nouveau-hippie brand The Elder Statesman. (Porowski has several of the label’s eclectic slogan sweaters in his wardrobe.) “People just think it’s badass,” he says of the piece—a bright-red pullover that replicates the iconic Marlboro cigarette packaging but with the word “meditate” replacing the brand name. “When I saw it, I remember thinking, ‘This is a beautiful sweater that is hand-stitched and high-grade cashmere.’ It made me reflect on the life I have now, where I’m in this incredible position where I can afford to have such a beautiful piece,” he says, adding that the sweater is also a clever juxtaposition of his previous and present pastimes. “When I was in my teens and partying like a monster, I used to smoke so many cigarettes. Now, I’m a non-smoker and I meditate every morning.”

Though Porowski might favour comfortable casualness for his every day, that doesn’t mean he doesn’t enjoy expressing himself with clothing when the occasion suits—or, rather, in the case of the premiere of the Cats movie last winter, not in a suit at all. Instead, he hit the red carpet wearing an unconventional Thom Browne ensemble composed of a private school-style cardigan, a starched white shirt and a pleated skirt.

“I’m so obsessed with Thom Browne,” he says. The New York-based designer’s celebrated irreverence speaks to Porowski’s wilder side and lets him tap into the captivating quality that great clothing can have. “I consider myself fairly conservative, but I have busted into more colour and had some daring looks,” he says. “Clothing can be so empowering.” 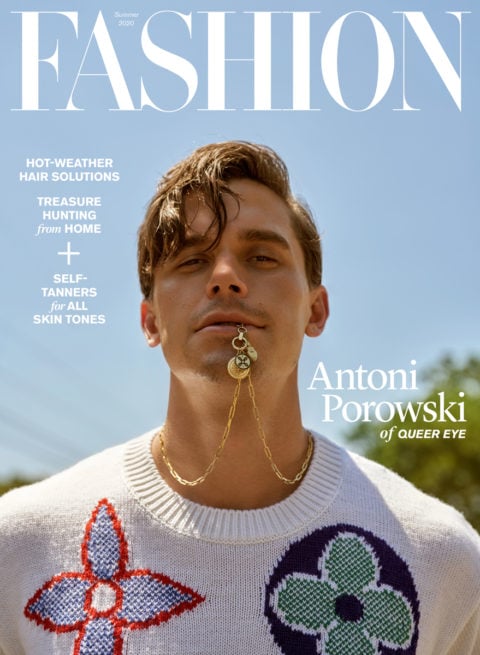 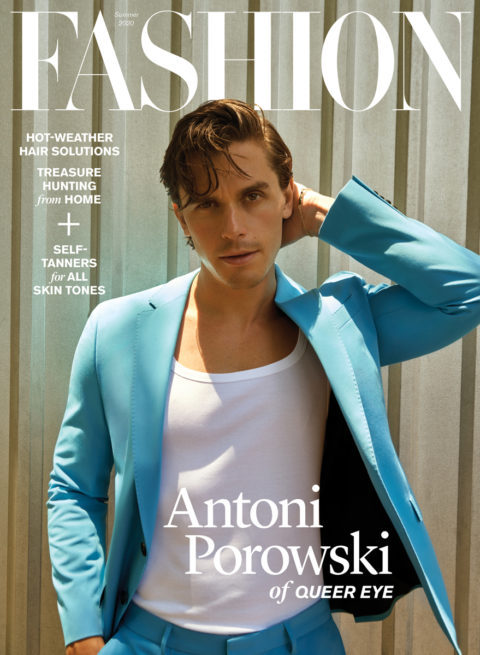 Photography by Ashlee Huff. Jumpsuit, price upon request, Dior Men.
Get the best of FASHION in your inbox Thanks for signing up!
The latest fashion, beauty and celeb news delivered right to your email #FASHIONforall Now, check your inbox to complete your subscription
We won’t ever use your email address for anything else
Want even more FASHION? Follow us on social media.