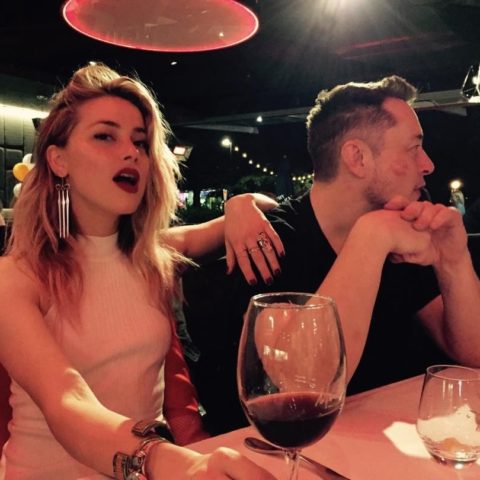 It’s official…err, Instagram official. After filing for divorce from Johnny Depp nearly a year ago, it appears that Amber Heard is moving on jussssst fine. And with Elon Musk, no less.

The 31-year-old actress took to Instagram last night to share a sassy shot of her and the 45-year-old Tesla CEO at Moo Moo restaurant in Australia. (She’s currently Down Under filming for Aquaman.) According to Romanian-German actress Ingrid Bisu, who was also at the dinner, the pair were celebrating Heard’s birthday along with friends.

Cheeky, indeed. In true couple form, Musk posted a corresponding Instagram. Hey, if you’re going to make it IG official, then matching pics are the only way to go.

Prior to the evening’s fete, just hours before, Heard and Musk made their first public appearance together at the Gold Coast’s Currumbin Wildlife Sanctuary. The newly-minted couple were photographed holding hands and being affectionate. The pair were also spotted zip-lining, and according to TMZ, two of Musk’s six (!) sons tagged along for the adventure.

We’ll be on high alert to see what this couple gets up to next.