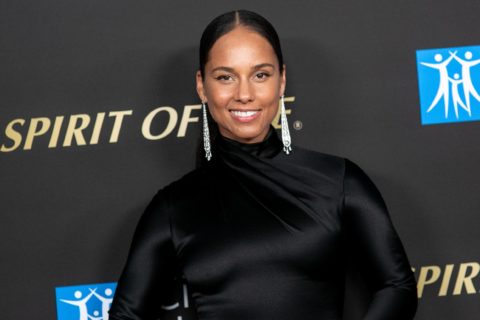 The singer say it's time for 'less labels, more expression'.

A trip to the nail salon is usually something we equate with feeling good. And yet superstar Alicia Keys found herself in a mixed state of emotions this weekend after taking her four year old son Genesis along to the salon with her.

Taking to Instagram to describe the experience to her 17 million followers, Keys explained how Genesis decided he also wanted his nails painted. “He’s in the chair, and he’s like, ‘I want rainbow,'” shares Keys, adding that the manicurist happily obliged and began painting his nails in different shades. “After he painted his nails, he looked at me and said, ‘Mommy, I don’t want this on my nails.’ And I was like, ‘Why? You were so sure.’ He was like, ‘People aren’t going to like it.’ Can you believe this? Four years old – he’s four, and he already understands the concept that someone’s going to judge him because he chose rainbow colours on his nails.”

Trying to encourage Genesis to keep the nails, Keys said, “I told him,  ‘Why? Nobody’s gonna judge you. They’re gonna like it. It’s so cool. Look how you creative you are. Look how amazing. You had this idea, stick with it. You chose it, you liked it, you do it. Who cares what anybody else says? A lot of guys paint their nails. This is not some strange thing that only you do.”

The singer says that the conversation then led her to think about labelling and judgement in society in a broader context. “The way I see it is that there is masculine and there’s feminine energies inside all of us, you know? And it gets concerning to me that we can’t just explore these different sides of ourselves, these different energies that are within us.”

The Fallin’ singer then shared that she too faces judgement when she explores the more masculine energy within herself, before saying that she wants everyone to feel free to express however they feel without fear or concern. “I oftentimes express the masculine energy that’s inside of me, and it’s very natural to me. That’s how I feel. And all the time, if that happens, it’s the judgements. Why can’t we just express the different energies that are inside us? This is a very normal, ancient, powerful, spiritual understanding that we all have masculine and feminine energies, and we should be able to explore and express them however we want to.”

Catch the whole clip below:

Been thinking about how over labeled and over judged we all are… can u feel me??

Photo by Gabriel Olsen/WireImage
Get the best of FASHION in your inbox Thanks for signing up!
The latest fashion, beauty and celeb news delivered right to your email #FASHIONforall Now, check your inbox to complete your subscription
We won’t ever use your email address for anything else
Want even more FASHION? Follow us on social media.