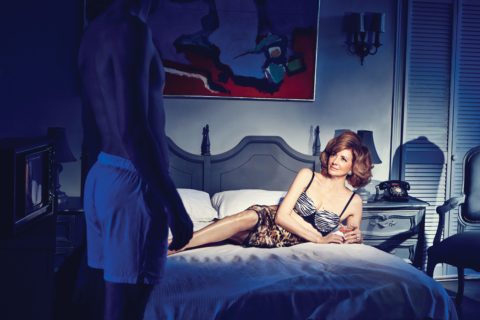 These aren't your grandma's grandmas.

FASHION’s March issue is all about women who are in their element, from Big Little Lies’ Zoë Kravitz–who talks about embracing her natural beauty and surrounding herself with strong women in our cover story–to older women who continue to strive later in life. Below, Courtney Shea explores the current golden age of women’s golden years.

Mrs. Robinson didn’t have a first name. When the seminal ’60s movie The Graduate debuted in December 1967, the idea that Dustin Hoffman’s 21-year-old would refer to his older lover using anything other than a formal honorific was laughable. Just the notion that a man in his 20s might be interested in a woman almost twice his age was explosive enough to inspire the entire plot of an almost two-hour movie. “I think you’re the most attractive of all my parents’ friends,” Hoffman’s Ben tells Anne Bancroft’s “Mrs.” shortly before hopping into bed with her, further underscoring the idea that she was majorly hot—for a mom.

Fast-forward 50 years and the pairing of younger men and older women is barely worth an eyelash-bat: Heidi Klum (44) recently dated Vito Schnabel (31), who previously dated Demi Moore (55), who was once married to Ashton Kutcher (39). Madonna (59) apparently dumped her 26-year-old boyfriend to date a more mature 31-year-old last summer, around the same time that Kate Beckinsale (44) was photographed smooching a guy whose mom is reportedly younger than she is. True, the age difference between French president Emmanuel Macron (40) and his 64-year-old wife formed a major narrative during last summer’s election—but he won.

And it’s not just in the dating world where “women of a certain age” are enjoying some long overdue adulation. This past fall, 73-year-old Lauren Hutton became the oldest woman ever to appear on the cover of Vogue, around the same time that Allure announced its decision to ban the term “anti-aging” in its publication. “Whether we know it or not,” wrote editor-in-chief Michelle Lee, “[the term is] subtly reinforcing the message that aging is a condition we need to battle.” At the 2017 Emmy Awards, 14 of the 19 actresses nominated for leading roles were 40-plus (more than half were over 50), including Reese Witherspoon and Nicole Kidman of Big Little Lies—a show that proves teenage Gossip Girls ain’t got nothing on Monterey moms.

Here in Canada, Atwood Mania is the new Bieber Fever, Shania Twain’s latest album debuted at the top of the Billboard charts and Céline Dion (a celebrity who, until recently, could have lost a cool-off against Barney the Dinosaur, has become the fashion world’s most unlikely It girl—make that It woman—just before her 50th birthday). Dion’s improbable ascent peaked last summer at Paris Fashion Week, where her street style wardrobe earned props from all the right peeps: Vogue gave her her own hashtag (#CelineTakesCouture). Drake even said he may get a tattoo of her, which is—let’s face it—the greatest stamp of approval this modern era has to offer. On the topic of tattoos, 83-year-old Judi Dench recently admitted to getting inked for the first time two years ago—block letters spelling out two words across her inner wrist: “Carpe Diem.”

Whereas in previous generations menopause may well have been an invitation to slip into a pair of house slippers and hunker down in front of The Price Is Right, today women in their so-called “third chapter” are, indeed, seizing the day.

Whereas in previous generations menopause may well have been an invitation to slip into a pair of house slippers and hunker down in front of The Price Is Right, today women in their so-called “third chapter” are, indeed, seizing the day. In 2016, 50-year-old tech entrepreneur Gina Pell coined the term “Perennial” to describe individuals of various ages linked by the desire to live in the present and keep up with trends and technology and the refusal to be defined by their birth year.

Nowhere is this so-called “generational blurring” more visible than in the style realm, where so-called “ageless fashion” has become both a movement (the rejecting of the notion that individuals must follow fashion rules in accordance with their age) and an important marketing insight, considering the buying power of both young and old.

“It used to be that women kind of aged out of mainstream fashion,” says Susie Sheffman, a creative director and stylist based in Toronto. Born at the tail end of the boomer generation, she says it makes sense to see her age group throwing out the rule book: “We burned our bras, we were the youthquake of the ’60s.” At 58, Sheffman will often find herself gravitating to the same clothing as her 25-year-old daughter (though they wear their pieces differently), and when she pulls looks for models and clients, she rarely thinks in terms of age-appropriate. She recently posed for a magazine shot in a jean miniskirt and a hoodie. “It’s hard to imagine my mom in something similar.”

I can remember my own mom telling me that after a certain age, a woman in jeans looked a little bit desperate. Mind you, she said that 20 years ago—before major fashion campaigns featured the likes of Joni Mitchell (74), Joan Didion (83) and Iris Apfel (96) for Saint Laurent, Céline and Kate Spade respectively; before hipster fashion grannies were among the hottest Instagram influencers; and before 20-somethings like Ariana Grande and Cara Delevingne started sporting grey hair—on purpose. The result is a Wild West where the old rules don’t apply. “It’s funny, because I think there are some women who wish some of the rules would come back,” says Sheffman, speaking of formerly tried-and-true guidelines, like your shoes should match your purse or your age should match your hemline. “There’s a lot of confusion out there. Women are afraid to make costly mistakes, and rules can help—but, sorry, those days are over.” So there’s a lot of pressure.

It’s easy to see why a mature woman might be all too happy to throw on a pair of Vans if that means maintaining her status as a valuable member of society. But she shouldn’t have to.

It’s no wonder that women have been so eager to enjoy an extended juvenescence given the alternative. The “Invisible Women Syndrome” describes the social phenomenon in which females over 40 often feel completely unnoticed—to not only the lewd catcallers at construction sites but also potential employers, suitors, store clerks and society in general. Preternaturally gorgeous 73-year-old Vogue cover models notwithstanding, women continue to experience appearance-based judgment and ageism at rates that vastly outpace their male counterparts. Maybe you saw the American presidential race, where, at 68, Hillary Clinton was often slagged as a potential “Granny in Chief” (her routine bout with pneumonia was covered as if she’d contracted the plague), while Donald Trump’s age—70—never came up. In this context, it’s easy to see why a mature woman might be all too happy to throw on a pair of Vans if that means maintaining her status as a valuable member of society. But she shouldn’t have to.

And here’s where the whole age-free ethos falls apart a bit. Because, sure, 50 is the new 30, Big Little Lies is the new Pretty Little Liars and so on, but what are we actually celebrating when we applaud older women for cheating time? “Anti-aging” may be out, but the related industry is booming—it’s expected to be valued at $269.25 billion by 2021. Which is an ironic but also a direct and totally logical consequence of a culture touting old as “the new young.”

People recently shared the backstory behind Queen Céline’s sartorial transformation: Inspired by the red carpet looks of Zendaya, she hired the actress/singer’s stylist to retool her look. So after a decades-spanning, chart-topping career, Dion was finally deemed “cool” by patterning herself after a woman who was a year old when Titanic came out. Which is not a bad thing—let’s not forget what it is we’re assigning value to when we praise older women.

Inspired by the red carpet looks of Zendaya, Céline Dion hired the actress/singer’s stylist to retool her look. So after a decades-spanning, chart-topping career, Dion was finally deemed “cool” by patterning herself after a woman who was a year old when Titanic came out.

In The Graduate, what was so great about Elaine, Mrs. Robinson’s 19-year-old daughter whom Ben ultimately runs off with? Sure, she was pretty, but Mrs. Robinson was ridiculously sexy. Emotionally damaged, maybe, but let’s just put that down to a repressive society. I’m pretty sure that today Ben would have chosen the older model. And he would have called her “Barb.”

We all want to slay our goals, revel in success at work and at home and feel comfortable in our own skin…to truly be in our element. But that looks different, depending on where you are in life. Click here to see what being in one’s element looks like for women of all ages.