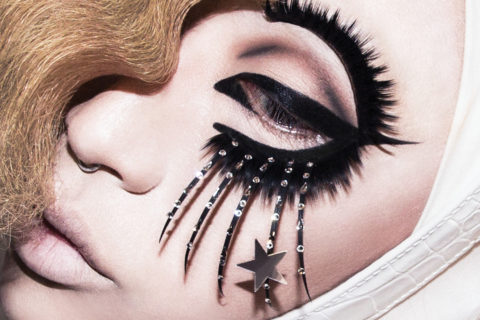 Timothy Hung pushes the boundaries of what makeup is meant to do.

Timothy Hung was looking forward to his Grade 9 fashion studies course when his guidance counsellor called him into the office. “You will be the only boy in the class. Are you sure you want to do this?” Hung recalls the teacher asking.

But he soldiered on with the sunny demeanour that has helped him power through many moments that could have soured his spirit. Physical punishment was common when Hung was growing up in Taiwan, and a mistake during piano lessons meant getting his knuckles smacked. At age 10,  he arrived at his new school in Vancouver speaking almost zero English. He endured bullying and name-calling from his teenage peers, and later, a recurring lung issue led to a battle with anxiety and several surgeries.

Today, Hung’s conceptual makeup artistry is a testament to his strength and conviction. To him, a face is a canvas on which anything is possible—from abstract waves to metal accents. His clients include Christian Dior, Kat Von D, Shu Uemura, Giorgio Armani, Burberry, Nars and Make Up For Ever, and he teaches advanced artistry to professional makeup artists.

It was while working backstage with M.A.C at Milan Fashion Week that the “art” of makeup artistry first clicked for Hung. He was fresh out of makeup school at the Blanche Macdonald Centre in Vancouver, where he had been taught that using brushes was the only way to apply product.

“At a Ferragamo show, Tom Pecheux wanted us to do smoky eyes with just our fingers,” explains Hung. “He has a set way of layering the colour and pigments, and the makeup turned out wonderful. It started me thinking that I could experiment more.”

Hung was also moved, quite literally, by the rehearsal music that was constantly blasting while he was prepping models for the runways. “It put me in that mindset where I could use music to guide me in that creative outlet and see where it took me.”

Hung listens to cinematic scores while he creates. And there is a lyrical quality to his work, with its bold sweeps of colour and staccato sequin dots. Sometimes he uses a product as it’s meant to be used and sometimes not.

“I use a lot of liquid lipstick from Anastasia Beverly Hills as eyeshadow, liner and blush and sometimes even as mascara,” he says. “I’ll put it on the back of my hand and scoop a blob with a disposable mascara wand.” For the photo below, Hung applied eyeliner all over his face with angled brushes to achieve the fine lines and curves.

It was when he was a boy of 10, watching his mother prep his sister for her traditional Chinese dance performances, that his interest in makeup started to stir. But his artistic leanings were channelled through after-school art classes, where he worked in pencil, charcoal and watercolour and learned cartooning and portraiture.

Hung was also deep into fashion design, thanks to a teacher who recognized his skill and singled him out to make a tailored jacket in Grade 9. He went on to win regional and provincial Project Runway-style competitions run by Skills Canada.

After high school, Hung was accepted at the Istituto Marangoni in Milan, and he attacked the fashion design program with his usual zeal. “I was sleeping four to five hours a day,” he says. “I wanted to do well. It was very expensive. I wanted to make sure I got the most out of the experience. If the teacher said ‘You have to do five designs,’ I would do seven to 10. I dove right in—and then I got sick.”

Back home, recuperating after two surgeries for spontan­eous pneumothorax, a condition in which the lung collapses with no warning or provocation, Hung finally decided to enrol in makeup school.

“When I first started, I didn’t have the ambition to create master artwork,” he admits. “I just wanted to make someone look beautiful and feel happy. For me, that was very rewarding. The art came when I allowed myself to experiment and do things outside the box.”

The looks Hung created on himself and photographed for this story took eight hours each (or more), which is typical given their extraordinary level of detail. “I want the face to be like an embellished couture dress,” he says. “I want to create work that when people see it, they feel something. I don’t want it to be just another beautiful image. I want it to tell a story.”

This article originally appeared in the October issue of FASHION magazine. Click here to subscribe so you never miss an issue.

Photography by Timothy Hung. Styling by George Antonopoulos.
Trends, beauty secrets, culture & more
Yours for only $1 an issue
Subscribe now!