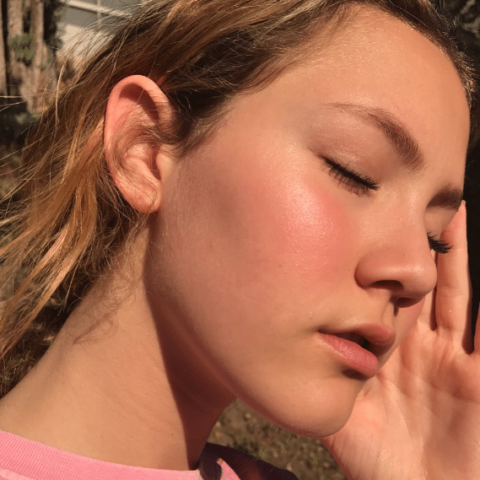 The other day, I was scrolling through Instagram and noticed a photo of Judd Apatow and Arya from Netflix’s love Love at the 2017 Teen Choice Awards. Clearly, I’m not as in the loop as I thought I was with Young Hollywood, but I soon realized it was Apatow and his wife Leslie Mann’s daughter, Iris, who was in the photo.

Naturally, I went into a black hole, looking up the 14-year-old actress (who is pretty much a mini-version of her mother) on Instagram, and was enamoured by how cool she was, though that’s not entirely surprising. But what really impressed me was Iris’s effortless beauty game, which consists of dewy skin and rosy cheeks. Seriously, if Glossier were to ever hire a spokesperson, it should be her (and considering they follow her on Instagram, it could very well happen).

And sure, there are plenty of fresh-faced teens who haven’t been affected by acne out there, but it’s the way Iris takes her photos, almost in an artistic way, as opposed to a Kylie Jenner-esque selfie. She also doesn’t appear to take herself too seriously, which is refreshing from a young girl in Hollywood.

I would say I have lost 50% of my sight after taking these pictures???

But the best of all? Apatow’s unconventional beauty tutorial.

We honestly can’t deal with how cool she is.

And in a world where celebuspawns are being eaten up by the fashion and beauty world (read: Lily-Rose Depp, who Iris bears some similarities to, and Paris Jackson), we wouldn’t be surprised if Apatow gets swept up by a major beauty brand soon. Her older sister, Maude, has already been featured on Into the Gloss (and was dubbed a “really cool teen who [is] also funny and unafraid of a good lipstick”), so we may just see Miss Iris on there soon.

Check out more of Iris’s best beauty grams below.

Afraid she doesn't love you anymore?

MOM it's not a phase

Photography via Instagram/irisapatow
Get the best of FASHION in your inbox Thanks for signing up!
You’ll get the latest fashion, beauty and celeb news delivered right to your email Now, check your inbox to complete your subscription
We won’t ever use your email address for anything else
Want even more FASHION? Follow us on social media.