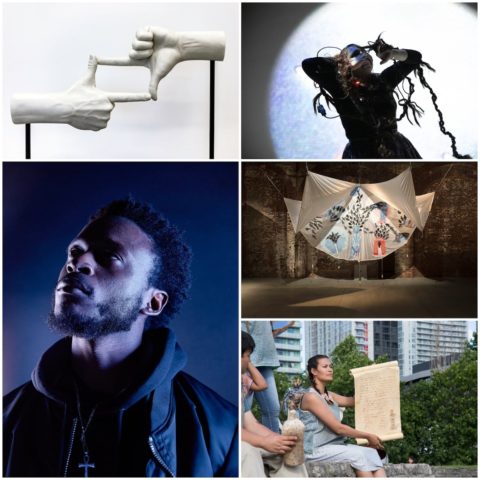 The multi-location event features over 100 works of art by creatives from Canada and around the world.

A former car dealership on Lake Shore Blvd E has been given a major makeover. As the site of the first Toronto Biennial of Art, the industrial space is filled with contemporary art by Canadian and international artists, spanning installations, videos, illustrations, interactive exhibits and more. In addition to the Lake Shore location, the Biennial also has a presence at Mississauga’s Small Arms Inspection Building, as well as at over a dozen other spots across Toronto including the Ontario Place Cinesphere and the Bentway.

An undertaking five years in the making, Toronto’s first Art Biennial is something the city’s art community has long been hoping for, and it has been thoughtfully curated so that the city plays a far greater role than just host. For the inaugural edition of the art festival, programming is built around the city’s waterfront, which is undergoing urban renewal at a faster pace than anywhere else in North America, and has also been home to indigenous people long before Toronto became a city—for at least 12,000 years. In the spirit of honouring and celebrating those underrepresented histories, the Biennial seeks to engage with the ancient geographical area as well as the communities who have seen it subjected to the vagaries of colonization, mass settlement and industrialization.

Re-gram via @shezaddawood #TObiennial19 • Opening tomorrow @torontobiennial #Leviathan : The Cod Trap is at 259 Lake Shore Blvd East and includes work produced on and of Fogo Island, including a section of an original #Newfoundland #cod #trap reworked by the artist and a selection of recent #paintings that #combine #oil #acrylic and #wool on #linen and that look at the overlap between the #social #histories of #fishing and #craft #traditions – part of a #Canadian partnership between @torontobiennial @mocatoronto and of course @fogoislandarts – thanks for making the research, time and space possible

“One of the Biennial’s objectives is to raise awareness about indigeneity in this region in the context of art and programming that asks us to reconsider how we are in relation with each other, the land, and our environment,” says the festival’s Executive Director, Patrizia Libralato.

Titled The Shoreline Dilemma and curated by curated by Candice Hopkins and Tairone Bastien, the inaugural edition explores the implications of what is often known as the “coastline paradox,” through the lens of Toronto’s ever-changing shoreline. This exploration is in service of a larger question: What does it mean to be in relation? More than 90 local and international participants have responded to and expanded on this question about interpersonal relationships as well as our relationship to the environment through their art.

Toronto is one of the most multicultural cities in the world, and the curation of artists participating in the Biennial reflects that diversity: they come from over 40 places of origin, including Brazil, France, Guatemala, Iran, Thailand and the United States as well as Nunavut and Indigenous communities in Canada, Colombia, Mexico and New Zealand. 50 percent of the Biennial’s artists identify as women, roughly 65 percent are people of colour, and 25 percent are indigenous. The event organizers are expecting over 400,000 visitors to attend the Biennial over the course of its 72 days to view over 100 works of art, including 20 new commissions made specifically for the event.

Artists at the inaugural festival include Toronto-based Luis Jacob, who is presenting a series of photographs along with archival maps, reports and street views documenting the shifting narratives of Toronto; Vancouver-based Sioux artist Dana Claxton, whose series of portraits mounted on LED fireboxes features indigenous women draped in their cultural belongings—beaded necklaces, feathered jewellery and embroidered bags; Kiwi Lisa Reihana, whose 64-minute video “brings to life Māori and Pacific Indigenous peoples’ relationships with their cultural knowledge and spaces,” and Mexico City-based Fernando Palma Rodríguez, whose installation of robotic monarch butterflies, the only species to migrate between Mexico and Canada, reflects on their decline due to climate change.

The Toronto Biennial of Art runs from September 21 to December 1 at various locations. More information can be found here.

Photo via twitter.com/TorontoBiennial
Trends, beauty secrets, culture & more
Yours for only $1 an issue
Subscribe now!