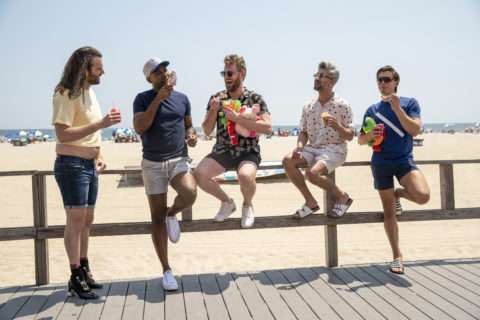 Including Season 5 of Queer Eye, Season 3 of Killing Eve, and seasons 1 to 3 of The Great Canadian Baking Show.

We’ve got a lot of time on our hands right now. Here are all the movies and television shows we can’t wait to watch on streaming services in June 2020.

Queer Eye: Season 5
After Georgia, Kansas, Missouri and Tokyo, the Fab Five are now headed to historic Philadelphia. Season 5 of the award-winning reality series sees Antoni, Karamo, Bobby, Tan and Jonathan making over a new cast of everyday heroes, from a hardworking DJ to a struggling dog groomer. Available June 5

Da 5 Bloods
This new film from Oscar-winning director Spike Lee tells the story of four African-American veterans who return to Vietnam. Searching for the remains of their fallen Squad Leader and lured by the promise of buried treasure, the war heroes “battle forces of man and nature while confronted by the lasting ravages of the immorality of the Vietnam War.” Available June 12

RuPaul’s Drag Race All Stars: Season 5
The queens are sashaying back to the runway in the fifth season of this reality series, each competing for the “All Stars” crown, a spot in the “Drag Race Hall of Fame,” and a cash prize of $100,000. Guest judges this season include Tessa Thompson, Nicole Byer, Sarah Hyland, Bebe Rexha, Jane Krakowski and Sam Richardson, with Ricky Martin serving as guest judge for the series premiere. Available June 5

Killing Eve: Season 3
The third season of this award-winning drama follows Eve (Sandra Oh) and Villanelle (Jodie Comer) as they try to live their separate lives, until a “shocking and personal death” puts them back on the same path and hurtling towards each other. Available June 5

I’ll Be Gone in the Dark
Based on a true crime book of the same name, this HBO documentary series explores late writer Michelle McNamara’s relentless quest to hunt down a serial killer, known as the Golden State Killer, who terrorized California in the 1970s and ’80s. The series gives voice to the survivors and their families, “documenting a period in time when sex crimes were often dismissed or hidden in shame.” Available June 28

The Great Canadian Baking Show
Seasons 1 to 3 of the CBC’s cooking competition inspired by The Great British Bake Off are dropping on Amazon in June. For its first two seasons, the show was hosted by Dan Levy and Julia Chan, with French-born Canadian chef Bruno Feldeisen and Canadian-Australian pastry chef Rochelle Adonis as judges. The third season was hosted by Aurora Browne and Carolyn Taylor from Baroness von Sketch Show, with Canadian chef Kyla Kennaley and Feldeisen serving as judges. Available June 15

Photo by RYAN COLLERD/NETFLIX
Get the best of FASHION in your inbox Thanks for signing up!
You’ll get the latest fashion, beauty and celeb news delivered right to your email Now, check your inbox to complete your subscription
We won’t ever use your email address for anything else
Want even more FASHION? Follow us on social media.