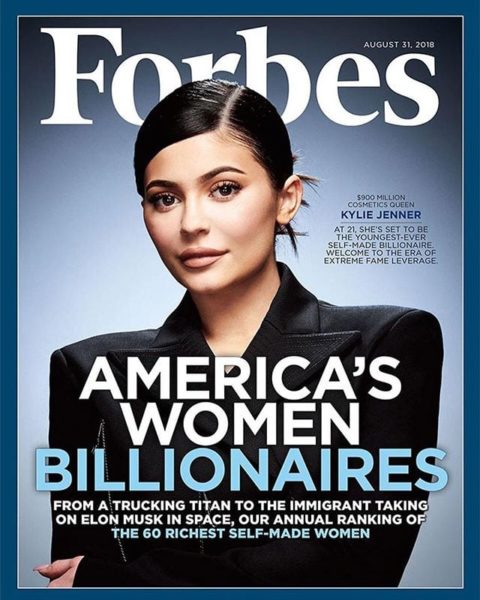 What is the web-o-sphere angry about this week? Forbes’ definition of “self made”, a celeb’s insensitive comments about the #MeToo Movement, and some unfair reality TV editing. Here’s everything you need to know.

On Wednesday, Forbes shared their August cover featuring makeup mogul and reality tv star, Kylie Jenner. (Does she even need an introduction?) The magazine, whose latest issue was based around America’s billionaire women, said the 20-year-old was “set to be the youngest-ever self-made billionaire.”

Calling Kylie Jenner self-made without acknowledging anywhere the incredible headstart she had is what allows people to turn around and look at poor people and ask them why they haven’t become billionaires yet. Her story is not inspiring or motivating for anyone https://t.co/YMnTSzHlKP

It is not shade to point out that Kylie Jenner isn’t self-made. She grew up in a wealthy, famous family. Her success is commendable but it comes by virtue of her privilege. Words have meanings and it behooves a dictionary to remind us of that. https://t.co/2HzIJbLb8q

Used in a sentence: Forbes says that Kylie Jenner is a self-made woman. https://t.co/sr8Ncd7s5A https://t.co/ehEL7Cf6KV

You know you messed up your wording when even Dictionary.com gets involved…

Here’s the thing, Kylie Jenner has worked her butt off to create an incredible brand. In less than three years, she’s built an empire and amassed a fortune exceeding $900 million dollars. We give her props 100% for taking the resources around her and turning them into something huge–but that’s the thing–Jenner has been surrounded by incredible resources her whole life. Her foot isn’t just in the door, it’s on the other side of the room. The opportunities that she’s been surrounded by are really what have enabled her to amass this mind-boggling fortune in such a short amount of time. And we’re not saying it’s Jenner that needs to acknowledge her privilege, it was up to Forbes to get that right.

Henry Cavill Made Some Pretty Insensitive Comments About the #MeToo Movement

On Tuesday, GQ Australia published a profile on Henry Cavill, and the Man of Steel actor had a lot to say about the #MeToo movement, expressing disappointment that he couldn’t go about the “old-fashioned” way of wooing women anymore. “Well, I don’t want to go up and talk to her, because I’m going to be called a rapist or something,” he said. “So you’re like, ‘Forget it, I’m going to call an ex-girlfriend instead, and then just go back to a relationship which never really worked. But it’s way safer than casting myself into the fires of hell, because I’m someone in the public eye, and if I go and flirt with someone, then who knows what’s going to happen?”

This is absurd. If Henry Cavill doesn’t want to be called a rapist then all he has to do is… not rape anyone.

The mental gymnastics some men are doing to position themselves as “victims” of #MeToo is insane. pic.twitter.com/nafnZiaXGH

Good. Henry Cavill *SHOULDN'T* date until he figures out how to do it without "accidentally" raping someone. pic.twitter.com/RywLedYkpS

Somehow Cavill manages to make the #MeToo movement all about himself in this interview. It’s sad because he’s taking a movement that is so positive and so long overdue and turning it into something negative. Although we agree that false accusations can be incredibly harmful, Cavill’s wording in this article—especially the way he casually compares rape to saying hello—is pretty insensitive. The #MeToo movement (which is supported by many men) does not assume that all men are out to commit sexual assault. Yet Cavill’s readiness to equate interacting or flirting with women as “casting [himself] into the fires of hell” shows just what his personal views of women in this post-#MeToo era are.

Love Island is an ultra-popular British reality TV show in which single people live together in a villa and constantly recouple in the hope of finding love. In the show, new people constantly enter the villa to replace the old. But one of the contestants, Samira Mighty, recently left the show by choice. She did so after the man she had been coupled up with, Frankie, was booted off. (This was because he hadn’t received enough votes from the public.) Once back in the UK, the recently eliminated Frankie had the ability to watch the show and noticed that his relationship with Samira had been completely glossed over. In fact, many scenes were cut entirely. From the outside, the two’s relationship hadn’t looked that serious (which was probably what led to the public voting Frankie off). In an interview with The Sun Frankie expressed his confusion and viewers began to wonder why Samira (who had been on the show since the very first week and had been desperately waiting to fall in love) was cast to the side. On Twitter many fans suggested that Samira’s race had played a part in her treatment.

I have to say that, again, @LoveIsland seems to have a problem with ethnic diversity and black women. Why spend every ep rehashing kissgate but spend NO airtime on Samira’s relationship so Frankie then gets voted out as public not seen him?! ?‍♀️? https://t.co/qNU1ZccK1g

#loveisland reminds me of Cabin in the Woods. It’s about entertainment and what producers think people want to see. Samira wasn’t playing into the stereotype of the sassy black girl who couldn’t get a man – she was awkward, soft and got a man. And so jt didn’t get airtime.

So love island edited out 1. Samira and Frankie in the hideaway 2. Samira and Dani’s friendship 3. Samiras argument with Georgia with racial undertones. The producers did not want us to like Samira!

SAMIRA AND FRANKIE DESERVED MORE SCREEN TIME. WHY WASNT THEIR NIGHT IN THE HIDEAWAY SHOWN. HE LITERALLY WAITED FOR HER AT GATWICK AIRPORT. MY HEART???❤️ #loveisland pic.twitter.com/fSBe5BfEMf

A spokesperson at ITV2 sent a statement about the accusations to BuzzFeed News, “It is not possible to show everything that happens in the villa due to time constraints.” That may be so, but considering Samira had been on the show since day one and that Love Island airs an episode literally every single night, it still seems bizarre that so little of Samira’s life in the villa was shown. In scenes that did feature her, she was only there to provide commentary on other (white) people’s relationships.

Love Island comes with high stakes. The winning couple walks away with 50,000 pounds. Unfortunately, because of the editing, Samira and Frankie were pretty much robbed of their chance to compete.

Photography via Instagram/@KylieJenner
Trends, beauty secrets, culture & more
Yours for only $1 an issue
Subscribe now!