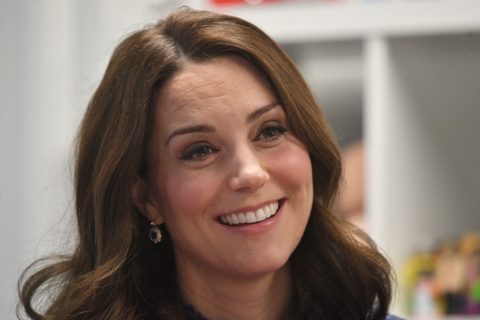 Last week, the Daily Mail drew widespread attention to a photograph of the Duchess of Cambridge holding a clutch. “It was Kate’s hands—and not her elegant cream ensemble—that generated the most attention on Tuesday,” the British tabloid wrote of royal’s recent appearance at a primary school in Oxford, UK. “Photographs taken of the pregnant mother-of-two indicate that, unusually, the central three fingers of her hands are almost the same length. Most people’s middle fingers are noticeably longer than their index or fourth fingers.”

Photo of Kate on her visit to Oxford primary school suggests her fingers are almost exactly the SAME length https://t.co/S7zkXI1Wx1

What does this mean?! As the future queen of England, will she be forced to abdicate her right to the throne?! According to the Daily Mail — who not only printed the story on their front page but featured a TWO PAGE SPREAD detailing the controversy — “people with relatively long index fingers have also been found to be more likely to suffer from schizophrenia, allergies, eczema and hay fever.” They cite scientists at the Institute of Cancer Research and everything! Very legit stuff.

But the Internet, sadly, isn’t buying into it.

“I’ve got an idea: we could do a thing about the size of Kate’s fingers being all the same size”.
“They aren’t, though”.
“Prove it”.
“I’ve done a box round them and they don’t touch the same line”.
“We shall publish anyway”. pic.twitter.com/cMMDfUs51V

Actually, if you examine Kate's fingers close up, they do look the same length. pic.twitter.com/8qVvjfnK14

The Internet is so smart sometimes! Because it turns out Kate Middleton’s fingers aren’t so funny after all. Here’s another photograph from last week’s conspiracy starting photo op.

And a close up, just for confirmation.

RIP #FingerGate. You weren’t real news, but you added a whole lot of light hearted laughter to my Monday morning.