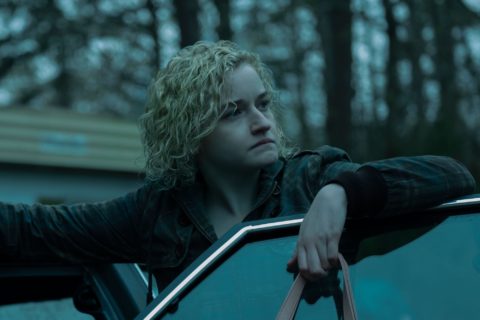 "If you do something that's different, you can just go home and be you."

I wasted my first couple of precious minutes with Julia Garner making nervous small talk. I compliment her shoes, she compliments my turtleneck, we chat about the caffeine we’re drinking and we spend an impressive 47 seconds talking about the weather. Because here’s the thing: I’m sort of terrified. I’m a huge fan of Netflix’s Ozark, and I’ve learned that Garner’s character on the hit series, Ruth Langmore, is not someone I necessarily want to be questioning.

But I quickly come to the conclusion that Garner—whose resume also includes roles in The Americans, Perks of Being a Wallflower and the upcoming Netflix series Maniac—is nothing like the fiery, foul-mouthed criminal mastermind she plays on screen. It turns out, she’s just a really, really good actress.

Before researching your career for this interview, I pretty much just knew you as Ruth from Netflix’s Ozark. And to be honest, you’re so incredible in that part, that I kind of just assumed you’re playing yourself on screen. I’m not alone in this, am I? Are people often times intimidated when they meet you?

The first week that Ozark came out I was at this salad place. Which is like the most LA thing; I was at a salad place in LA. Anyway, the guy who was putting lettuce in the box looked so scared of me, and was just kind of rude. So I was like, “Sir, are you okay?” And he said, “Yeah, I’m sorry. I just finished watching Ozark and I’m really scared of you.”

And I was like, “Oh, really?” I was literally wearing a floral dress, ordering kale. Not threatening at all.

So that’s what a normal day looks like for Julia Garner? Wearing cute little floral dresses and ordering kale?

That’s very different from the day to day life of Ruth Langmore. Do you look for characters who are kind of the opposite of who you really are?

Yeah, but if there was something that was like me, that’s fine too. As long as it’s a good job and the part is interesting, and I like the people that are involved. In the end, the most important thing is the story, because if you have a good story, that means that good people want to be attached.

But you seem to be always play someone who’s kind of on the fringes of society — like the cults and the cannibals.

There was one one review, years ago, that said, “Go-to cult girl, Julia Garner”.

That stuck with me, I thought that was very funny. I think that even when there wasn’t something off with a character in the writing, I made it so that there was something a little off. It’s so much more interesting when the character’s complex and you’re trying to figure them out.

When you walked out of the audition room for Ozark, I read that the showrunners said something along the lines of : “Whoa, we need to make this part so much bigger.”

I wanted the job so bad that I actually prepared with a Missouri accent. And when I got to the audition, I could hear the other actors reading their lines, and was like, “None of them have the accent, I’m screwed”. But I couldn’t remember my lines when I wasn’t doing the accent. So, I just had to do the accent—and it worked.

It really worked. Does putting on an accent make it easier for you to get in and out of character?

Yeah. I guess it’s like almost, in a way, wearing a wig. If you do something that’s different, you can just go home and be you. You don’t have to take the character with you.

I can imagine it would be hard to take a character like Ruth Langmore home with you everyday.

Do you have a way of decompressing after carrying these kind of characters with you all day?

Housewives. It’s bad. But I don’t even have to watch, I can just go to the other room and just hear them banter, I love it.

You really can’t do that with the shows you are in, can you? Maniac and Ozark are two shows where you really need to be paying attention.

Well, these are like smart shows. You have to pause, rewind, re-watch scenes. I definitely think you don’t want to miss a beat with these kind of shows. Otherwise it’s pointless. In thirty seconds you might miss a really important part.

And in these shows, it’s really you that people are paying attention to. In Ozark and in Maniac, you’re acting alongside pretty heavy hitters. Does working alongside these A-List veterans—people like Emma Stone, Jason Bateman and Laura Linney—fuel you to be your best?

You know, at the end of the day, everyone is just wants to do a good job. You  have to show up and be prepared and do the best job you can do. I don’t do it for the A-list people—I would do it for someone that’s acting in their first movie. You have to come home knowing that you tried everything you could.