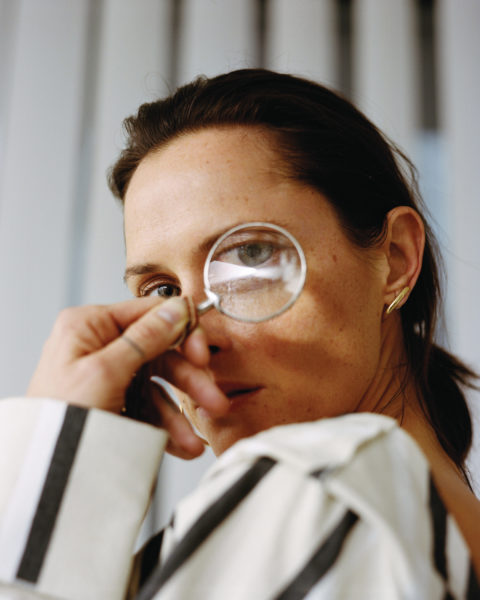 The Right Type of Curiosity: Are You Inquisitive or Just Nosy?

Not everyone is born equally curious, and not all forms of curiosity are created equal. But how can pursuing the right kind of curiosity make your life better and bigger?

If I were a character in a horror movie, I’d be the last one dead. An otherworldly hum radiating from outside my tent? I’d pop in my earplugs and go back to sleep. The ancient puzzle box from the creepy antique shop that wasn’t there yesterday? It would gather dust on my mantel for generations, unopened, unsolved. The phone call coming from inside my house? Straight to voice mail. I used to love sharing this little insight into my personality. It was a winning icebreaker, funny because it’s true. Then I read Ian Leslie’s Curious: The Desire to Know and Why Your Future Depends on It. I haven’t made light of my lack of curiosity since.

The future, says Leslie, belongs to the curious. Linked to higher levels of intelligence, creativity and success, curiosity is the “knowledge emotion” that separates the cognitive elite (those with the inquiring mindset to thrive in the 21st century) from the cognitive misers (those who seek to expend as little mental effort as possible). Getting on the right side of this divide, however, isn’t simply a matter of being curious. It’s about being the right kind of curious.

On the low end of the curiosity spectrum is divers­ive curiosity. A mile long and an inch deep, diversive curiosity is what impels you to ask the Porsche-driving millennial next door what he does for a living, research how Justin Bieber’s marriage is going or scroll your Twitter feed for updates on your (least) favourite polit­ician. While being diversively curious isn’t in itself a bad thing—it’s what gets you off the beaten track in the first place—it can descend into an aimless, unproductive impulse that never gets the chance to deepen or mature.

While being diversively curious isn’t in itself a bad thing—it’s what gets you off the beaten track in the first place—it can descend into an aimless, unproductive impulse that never gets the chance to deepen or mature.

Leslie believes this is especially true in the digital environment we are creating for ourselves, where curiosity is viewed not as a sign of intelligence to be cultivated but as a form of attention to be maintained through stimuli. “Google and Facebook are not in the business of fostering deep curiosity. They’re part of a system set up to deliver the most ‘popular’ answers and designed to confirm—not challenge or expand—the direction you’re already on,” he says.

As algorithms become increasingly skilful at providing answers based on a mere keyword or two, the unintended consequence is that the question itself becomes lazier and less thoughtful. If you want to know who the Queen of Spain is, for example, you can find the three-word answer online and be immediately satisfied. If you have to ask someone, read part of a book to find the answer or even dig deep into online sources, this would be more difficult and time-consuming, but it would also stimulate your interest in new ways and potentially lead you to learn more about the Spanish monarchy, the country’s history and its current political situation.

“The internet is an amazing tool that can be used to stimulate curiosity or make you more incurious: It extends the possibilities on both sides.”

“The internet is an amazing tool that can be used to stimulate curiosity or make you more incurious: It extends the possibilities on both sides,” Leslie says. His best advice for using technology to cultivate a curiosity mindset? Start training yourself to ask better and more important questions, allowing them to incubate and marinate in your mind long enough to become rich and interesting.

The ability to ask meaningful questions is a characteristic associated with the highest form of curiosity: epistemic curiosity. This is the kind that compels you to accumulate knowledge, absorb new ideas and solve intellectual problems. Productive even when it is not immediately relevant, epistemic curiosity paves the way for the self-motivated learning and cognitive meandering that can lead to breakthrough ideas and fresh perspectives. Leonardo da Vinci is a good example of this. According to Leslie, a random Leo to-do list was reported to include calculating the measurement of Milan and its suburbs; learning how to repair a lock, canal and mill; examining a crossbow; and researching ice skating in Flanders. Impressive, sure, but he didn’t have Netflix to distract him.

Productive even when it is not immediately relevant, epistemic curiosity paves the way for the self-motivated learning and cognitive meandering that can lead to breakthrough ideas and fresh perspectives.

Then again, distraction isn’t really the problem. “Epistemically curious people take risks, try things out and allow themselves to become productively distracted. They know something they learn today may well be useful tomorrow or spark a new way of thinking about an entirely different problem,” says Leslie, noting that the very technology companies whose systems and algorithms are rewiring our brains for diversive curiosity are also the ones hiring for epistemic traits.

The concept of curiosity as a practice that can help you accumulate diverse and eclectic pieces of know­ledge that will eventually interconnect to reveal new and exciting possibilities is at the heart of Brian Grazer’s A Curious Mind: The Secret to a Bigger Life. For Grazer, the Academy Award-winning producer of such films as Apollo 13, A Beautiful Mind and 8 Mile, curiosity is a habit, a mindset and a more exciting way to live in the world. The book details the author’s 35-year practice of seeking out “curiosity conversations” with complete strangers from outside the worlds of film and TV.

His goal is to understand what makes the individual tick and how their attitude and personality tie in with their work, challenges and accomplishments. Over the decades, Grazer’s interview subjects have included an etiquette consultant, an oceanographer, an oil-well firefighter, a Buddhist monk, a physicist, a diplomat, a magician, a French aristocrat, an Egyptologist and a celebrity divorce attorney.

“Epistemically curious people take risks, try things out and allow themselves to become productively distracted. They know something they learn today may well be useful tomorrow or spark a new way of thinking about an entirely different problem.”

While he has never made a movie about any of these strangers, Grazer says the insights he gleaned from speaking with them have informed his work in vivid and unexpected ways. To capture the psychology of being trapped in a crippled spaceship for Apollo 13, for example, he drew on his conversation with Veronica de Negri, a Chilean bookkeeper and activist who was tortured for months by her own government. De Negri’s ability to separate herself from what was being done to her by achieving a flow state helped Grazer grasp what it would be like to be forced to rely completely on oneself to survive—exactly what the Apollo crew had to do when an explosion in an oxygen tank left the spacecraft orbiting the moon without water, electrical power or oxygen reserves.

While Grazer’s conversations—deep, varied, open-minded and motivated by passionate interest—have all the characteristics of epistemic curiosity, he is quick to categorize his breed of curiosity as “emotional”: driven by the desire for connection. Grazer believes the link between curiosity and empathy is undeniable. “If manners are the lubricant that lets us all get along, curiosity is the shot of Tabasco that adds some spice, wakes us up, creates connection and puts meaning into almost any encounter,” he writes.

“If manners are the lubricant that lets us all get along, curiosity is the shot of Tabasco that adds some spice, wakes us up, creates connection and puts meaning into almost any encounter.”

The human value Grazer places on curiosity is echoed in the findings of a 2013 study by George Mason University in which strangers were asked to spend five minutes getting acquainted with one another by posing and responding to personal questions. To gain added insight into the participants’ personalities, the researchers also interviewed their parents and close friends. The verdict: Participants who presented as curious were rated as being more enthusiastic, outgoing, confident and funny by strangers and loved ones alike. According to lead investigator Dr. Todd Kashdan, the results indicate that the mechanisms of curiosity also benefit romantic, longer-term relationships where keeping interest alive is key to preventing boredom and breakups.

“Curious people know how to detect novelty more quickly and find the unfamiliar in the familiar. They have an ongoing interest in learning about their partners and intentionally try to keep interactions engaging and playful, an approach that supports the development of good relationships,” he says.

With so many intellectual, economic, social and otherwise life-affirming benefits attached to curiosity, it’s important to remember that this trait is a natural impulse but not a gift that keeps on giving. Leslie says it’s more like a muscle that needs regular stretching and strengthening so it doesn’t atrophy and become weak. “Once you’ve worked out the routines of your life, it’s remarkably easy to stop learning and rely on the knowledge you’ve already acquired, and without even realizing it, you become a little duller, a little dimmer,” he warns. In horror movies, curiosity is a fatal flaw, but in real life, it’s what keeps us alive, engaged and kicking.

How to tap into epistemic curiosity

Just as all forms of curiosity are not created equal, all human beings are not born equally curious. Although the study of curiosity is in its infancy, researchers suspect the trait is linked to age, genetics and possibly early childhood exposure (or a lack thereof). The good news is that with a bit of effort, it is possible to charge up your natural levels of curiosity.

Get better at detecting novelty and complexity in everyone and everything. Adopt the mindset that every individual has an interesting story to tell. You just need to find out what it is. If you don’t succeed, it’s on you, not them. More than just a mantra, this should become your intentional approach to engaging with the world. And not just with other people—the same principle applies to your daily routines.

Skip a few rungs on the intimacy ladder. “Although there are no rules about when you get to talk about deep stuff, people have this lame belief that you have to wait. Everyone abhors small talk, and yet everyone is responsible for it,” says Kashdan. Raise topics that are “prematurely interesting.” You’ll find that more often than not, people will be excited to talk about something other than the weather.

Improve your tolerance for uncertainty. Ever wonder why we are so quick to form an opinion or judgment, even in the absence of facts? It’s because uncertainty makes most people anxious. Try exposing yourself to new issues slowly, reserving judgment until you understand the situation better. The ability to tolerate ambiguous situations, says Kashdan, is what separates the curious from the not.