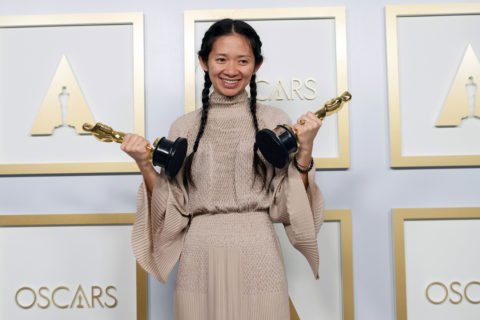 The 2021 Oscars Was a Night Full of Historic Wins

Chloé Zhao, Youn Yuh-jung, Emerald Fennell and more are all going down in Academy Awards history.

The 2021 Oscars sure looked different than the traditional ceremony we’re used. But despite the smaller ceremony, it was still a chance for the celebs in attendance to return to red carpet glam, and for winners to give moving, hilarious speeches that will definitely last in our memory. It was also a history-making night, with many long-standing (and, in some cases, painfully outdated) Academy Awards records being broken. Here, we break it all down.

Chloé Zhao had already made history when the 2021 Oscar nominations were announced, but now she has further cemented her legendary place. With her Best Director win for drama Nomadland (which also won Best Picture), the Chinese filmmaker becomes the first Asian woman — and first woman of colour — to win in the category. Zhao is also only the second woman in Academy history to earn the recognition (the first was Kathryn Bigelow, who won in 2010 for The Hurt Locker).

Speaking of Emerald Fennell (who, if you didn’t know, also played Camilla Parker-Bowles in seasons three and four of The Crown), the British multi-hyphenate walked away with a statuette of her own. Her win for Best Original Screenplay, recognizing her Promising Young Woman script, makes her the first woman to win a screenplay Oscar (yes, between both the original and adapted categories) since Diablo Cody won for Juno in 2008.

Here’s a long-overdue first: Ma Rainey’s Black Bottom creatives are the first Black women to ever win an Oscar in the hair and makeup category. (Fellow stylist Sergio Lopez-Rivera also won alongside them.) “I stand here, as Jamika and I break this glass ceiling, with so much excitement for the future,” Neal said in her speech. “Because I can picture Black trans women standing up here, and Asian sisters, and our Latina sisters, and Indigenous women. And I know that one day it won’t be unusual or groundbreaking, it will just be normal.”

Age is but a number

Anthony Hopkins’ Best Actor prize for his work in The Father was…unexpected, to say the least. But with his win, the 83-year-old, who wasn’t in attendance at the 2021 Oscars ceremony, became the oldest actor to win an Academy Award. He had some good company, too: 89-year-old Ma Rainey’s Black Bottom costume designer Ann Roth (also not in attendance) became the oldest women to ever win an Oscar when she topped the category.

We’re no strangers to seeing Frances McDormand on stage accepting awards for her amazing acting, and last night was no different. The Nomadland star — who also won as a producer on the film — walked away with the Best Actress statue for her performance in the acclaimed drama, making it her third win in the category. (She previously won for Fargo and Three Billboards Outside Ebbing, Missouri.) The only other actress to have more wins in the category is Katharine Hepburn, who won four.

And, in case you’re thinking, “Wait, doesn’t Meryl Streep also have three acting Oscars?” you’re right. But only two of them are for Best Actress — her third is in the Best Supporting Actress category.

If you haven’t been following Youn Yuh-jung awards season journey, you’ve been missing out. The acclaimed star became the first Korean actor to ever win an acting prize at the 2021 Oscars with her Best Supporting Actress victory for Minari, and she gave a show-stealing speech to top it off. She started by chatting with Brad Pitt, who presented the award (he also was a producer on Minari), corrected people for mispronouncing her name throughout the season, acknowledged her fellow nominees and co-stars, and gave a shoutout to her family that had the audience cracking up.