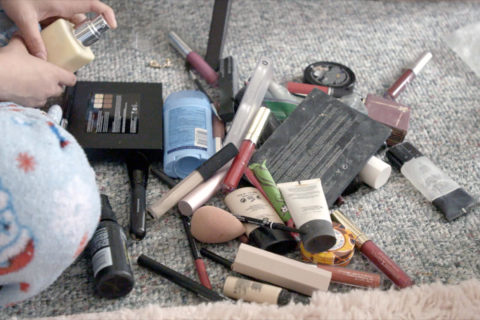 When she was an Olympian playing field hockey in the 80s, filmmaker Phyllis Ellis estimates she applied baby powder on her body five times a day for about 15 years. Like many athletes, she would use the powder to freshen up after training or on her inner thighs to avoid rashes during a 10K run. Years later, when it emerged that women who had been longtime users of Johnson’s Baby Powder were dying from ovarian cancer and filing lawsuits over it, she got scared. But it also spurred her into action, and ultimately lead her to making Toxic Beauty, a documentary that premieres Sunday night at Hot Docs. (There’s two other screenings this week).

She didn’t stop at talc though. In addition to following women who were regular users of J&J baby powder and then diagnosed with ovarian cancer, Ellis tracks Mymy, a medical student examining her own use excessive use of products and also meets with scientists, doctors and researchers to dig into the links between the under regulated world of cosmetics and personal care and our health.

We spoke to Ellis ahead of the film’s premiere:

A large part of this film focuses on the J&J baby powder ovarian cancer story, which could have been a film on its own. Why did you decide to branch off from that?

There was a parallel between one of the wonderful women I had the privilege of spending time with, Mel Lika—she actually passed away before we finished the film. She was my age, 60. That was a lifetime use of a personal care cosmetic. Then there’s Mymy who’s starting off in her life and using an inordinate amount of products. I thought of it in little chapters. As a filmmaker, you’re always looking at a narrative arc and what the through line is. Talc pulls us through. Another really important point is that the experts in the film like Dr. Michaels, they’ve been working on endocrine disruption for 20 or 30 years. When you start using talc at 13, 14, 15 years of age and use it for 20 years? The talc story is the story that has been followed.

Regarding the talc story, whenever I read about it, I’m always still horrified that women felt that they had to sprinkle it in their underwear to feel fresh and now it’s resulted in this.

I know. If you look at it outside of using talc in your underwear, there’s a lot of freshening up that young women do today. There were three things that pushed me over the edge, that I was questioning all along the way. Dr. Ami Zota says, “We have to change these beauty norms so women don’t have to choose between their health and trying to look beautiful based on these arbitrary standards.” Dr. Julie Brody says, “You don’t want to have to wait 20 years to find out something in hand lotion is causing breast cancer.” I love the precautionary principle in epidemiology. Dr. Michaels says, “Chemicals are not like people. They’re not innocent until proven guilty.”

I was so intrigued by Mymy’s urine test results, which make a convincing case of detailing what she was being exposed to on day one from all of those conventional products, versus day two when she swaps them out for products from The Detox Market. It would be amazing if that kind of test was more accessible to people so they could do one themselves. How would someone get access to a test like that?

That’s a call to action. I actually think that should be part of your annual every year. You should be offered it not just for cosmetics and personal care products but all the other things we’re exposed to. I know there are places you can go and do that here but it’s quite expensive. I think they should start doing it when kids are young.

In general I find there’s a lot of fear mongering when this topic comes up. It can make people tune out, which is unfortunate because you’re going to lose a lot of people with your messaging if they’re put off by that.

I think that when you’re looking at something like baby powder and the direct link to ovarian cancer, I think that’s ok. We’re at a point where this is the way it is. Let’s get it off the market. End of story. It’s a really good point. Sometimes you have to push way left to pull into the middle. It’s time to talk about this in a really real way. It would be phenomenal if the industry could come up with an approach that’s completely acceptable. It’s not about, “You’re all going to die from lead in your system.” It’s about, “Look, we’re making it without that.” I agree with you. Along the way, I cleared out almost everything in my house. I think I have coconut oil, vinegar, lemons, and baking soda. I still wear a bit of makeup. It’s a thing.

I think we all still have a few things that we use that probably wouldn’t be deemed clean.

There was a guy who toward the end of the film who used to be a formulator for L’Oréal. One thing he said that I thought was really great and I don’t think I put it in the film was, “Listen, I know what’s in all this stuff. Do I wear cologne? Absolutely. I love cologne. Do I go to bed with it on? Absolutely not. Do I wear it for 20 hours? Absolutely not. If I’m going out at night, I put a bit on then I come home and wash it off.” If you put it on for a couple hours, you’re good to go. That’s the message. The other message we cannot negate is that people only associate talc with baby powder, not realizing that the eyeshadow that your kids could be putting on could have talc. You breathe that in. In that way, I think there’s a big alert there. With everything else we have to be aware. We could have a huge conversation about the industry, but it’s really at a government level. We have to believe that regulators are actually regulating. When you pick something up off the shelf, how can it not be regulated? I think there are a lot of places where we have to be responsible. As consumers we have to say, “That doesn’t make any sense.”

I think it’s necessary and I think it’s great. I know it’s extremely expensive. The EU did it in 18 months. I laugh because things are banned in the EU but completely ok to be on the shelves here in the United States. Do they have some special gene that they can’t use this product but we can? I think they took such a strong position and we’re following suit. It’ll take a while but it’s smart. If I were a big brand, I’d be a little bit concerned right now. Consumers are smart. David Michael said something to me that was awesome as well. He wrote Doubt is Their Product. It’s an amazing book. He was involved with the tobacco issue and many things. He has a second book coming out and I think talc is involved in that book. He said to me, “Phyllis, this is not a balanced argument. What happens in the media like what happened with climate change was that there was, ‘I don’t know if there’s climate change. What if there is climate change?’” What happened is in the 70’s and 80’s, we had that debate. The argument was, “We might not be in so much trouble.” It’s the same thing with this. It’s not really a debate. Change is going to have to happen. We really don’t need to argue. We’re past that time for “I think”. To your point as well, we don’t need to be scared straight but I do think these cautionary tales of of real women–Mel Lika was a counter intelligence agent. She could have died in Kuwait or Afghanistan or any of these war zones. To be taken down because of the talc in the tissue of her ovaries? Come on. That’s insane. That’s not right.