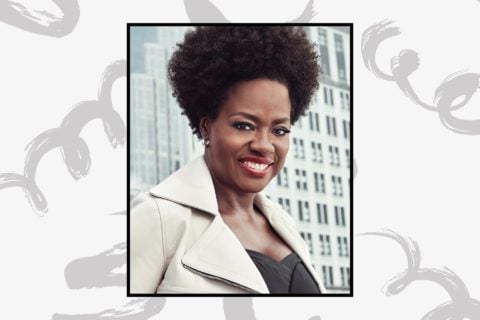 This is Texture Talk, a column that celebrates and deep dives into the dynamic world of curly hair, from crowns of curls that are free flowing to strands that are tucked away in a protective style.

“Subversion and protest can be very loud or very quiet,” said Cityline’s Tracy Moore on Monday afternoon. The daytime talk show host is leading a virtual chat with acclaimed actress, producer and L’Oréal Paris ambassador Viola Davis during the Toronto International Film Festival, and a handful of beauty industry insiders are glued to their WFH screens carefully listing in. “Talk a bit about the courage it takes for a Black woman to move through the world with her natural hair—the way it grows out of [her] head—because it’s a statement in itself to wear [natural] hair. It’s a big deal,” continued Tracy.

Her question throws to Viola’s 2012 Oscars red carpet look, when the actress was up for Best Actress for her role in The Help, and chose to de-wig and debut her natural texture. Prior to that head-turning moment, the now Emmy, Oscar and Tony Award-winning performer had donned an array of wigs and hairpieces on red carpets to compliment her outfits. Viola’s glowing look was a teachable moment, giving the world a crash course in the ever-complicated politics of Black hair.

“It goes back to hiding. It goes into erasure and invisibility and that has its birthplace in systemic racism,” answered the How to Get Away with Murder star into her computer screen. “It was projected in culture that [the Black woman] wasn’t pretty, and the darker you were, the uglier you were. And we carry that mentality [as Black women]. We just carry it, even in unforeseen ways,” she continued about the long-standing hang-ups that still remain around Black beauty at large. “That’s why I wore my natural hair.”

And freeing her natural coils was not only a symbol of silent protest against Eurocentric beauty standards, but of finally finding harmony within herself. “By that point, I was exhausted. Every time I was on a red carpet, it felt like a strange sort of mixture of ‘I belonged on a red carpet [because] I was dressed appropriately’, but also that I was trying to be myself, and I could never find the balance,” she said. “When I took the wig off, I found the balance. And I have to tell you, I felt really good. I felt surprised with how good I felt. I wrote my own headline [that night]: ‘Viola stuns with her natural hair.’”

After Tracy and Viola’s spine-tingling conversation, we had the chance to snag a couple of minutes with the actress and ask her more about her public hair journey. Here’s what she shared:

How would you describe your relationship with your hair throughout your professional acting career and how has it evolved?

“It’s a complete journey. Whenever you get a role as an actress, the first thing is: How can you transform? Of course, your hair is the number one thing that you feel like can transform you into a character. But, I never felt like my own hair was an option for a character. The big step for me was the movie Widows with director Steve McQueen. When we were talking about hair, I gave him this huge monologue about what hair I should wear, then hung up. He called back and said, ‘Why can’t you wear your hair?’ And there was just silence. I think part of that was because I was the lead in the movie, and just felt like my hair wasn’t an option. There’s something about connecting natural hair that’s kinky to ‘what’s not beautiful’. And not only to what’s not beautiful, but that natural hair isn’t even in the conversation of beauty.

Whether you’re rockin’ a TWA or big Afro, rock it with pride! Thank you to my amazing hairstylist @jamikawilson for always making sure my afro is on point! #WorldAfroDay

I always quote Steve McQueen on this because, whether Steve McQueen realized it or not, it was such a powerful statement. He said, ‘I see this Black woman all the time, Viola. I see her in airports, on the streets in Paris and she’s beautiful and she’s with her boyfriend. So it’s about time that we introduced her on screen.’ That’s what my [hair] journey has been. It’s almost like a journey into self-acceptance, and my hair was neck-and-neck with that. My hair has reflected that journey in the past, and certainly in How To Get Away With Murder, my hair went through every incarnation. It’s not that I don’t wear wigs anymore, but my big thing now is: At least I see [my hair] as an option, and not just if I’m playing, say, someone who would be considered of a certain income bracket, or someone who would be considered not attractive. I consider my hair to be an option in the broad spectrum of whatever I do as an actress.”

Photograph courtesy of L'Oréal Paris. Design by Kayleen Dicuangco.
Get the best of FASHION in your inbox Thanks for signing up!
The latest fashion, beauty and celeb news delivered right to your email #FASHIONforall Now, check your inbox to complete your subscription
We won’t ever use your email address for anything else
Want even more FASHION? Follow us on social media.