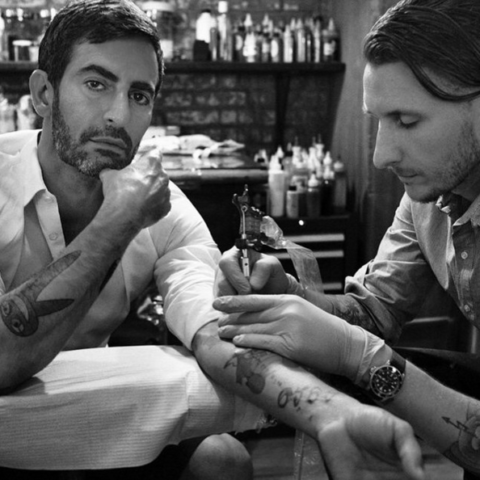 Would you let a stranger tattoo whatever they wanted onto your arm? What if that stranger was a world-renowned tattoo artist who has worked on everyone from Marc Jacobs to Courtney Love to Penelope Cruz? Scott Campbell has been working with celeb clients for years (he’s even married to one—actress Lake Bell, who, by the way, was tattoo-free until this week!), but in 2015, Campbell launched a travelling installation called “Whole Glory,” that takes the artist-client relationship to a new level.

Fans enter to be picked in a draw, and those who are chosen often travel long distances to get work done by Campbell. Once they arrive, they have no interaction with him. In fact, they’re separated by a wall with a hole in it, and they sit down and stick their arm through that hole. Campbell then proceeds to get a feel for them and their vibe, and then tattoos whatever he wants onto their arm. After it’s all over, they finally meet each other and admire the ink together. Think of it like the most extreme trust-building exercise ever.

I sat down to chat with Campbell when he was in town celebrating his collab with Hennessy (each year, the brand taps a famous artist to design the bottle’s holiday artwork, and this year Campbell’s drawing is on limited edition bottles sold at the LCBO).

You’ve said you’re interested in the magic that the ritual of tattooing carries with it. Can you explain what that means?

“Tattooing serves a real emotional purpose to people. While pop culture is embracing tattoo imagery, a lot of it kind of misses the point. The experience of getting the tattoo is the thing. The tattoo is kind of like a residue that’s left over afterwards. If you have amazing memories of getting a tattoo, the aesthetic of it becomes secondary and vice versa. If you have a perfectly done, beautiful tattoo but had a terrible experience getting it, you’ll never really be comfortable with it.”

With Whole Glory, I have to say I’m surprised that so many people are that brave!

“I started the project out of curiosity. I didn’t have expectations. In the beginning, I had no idea if anyone would show up. I presumed that the people who would participate would be scumbags like me with disposable arms and a bunch of tattoos already. I was surprised to find out that half the people who I tattooed for this project have no tattoos.”

Their first tattoo is a surprise?

“Over half of the people that do it, I’d say, yes. One woman once said told me she had entered and her name hadn’t been picked, and she was super bummed. So I told her, ‘Come in on Tuesday! Tell me what you want and we’ll do it. I’m happy to tattoo you.’ She said she would only do it in [the Whole Glory] scenario. It was so interesting that if the responsibility of choosing what she was going to get was placed on her, it was overwhelming. If I took that pressure on and took that responsibility, it was much easier for her to get a tattoo. It kind of made me proud of her. The actual specifics of what she got was less important than the experience. I was really into that.”

And you truly have no communication with the person on the other side?
“Zero communication. I have headphones on. I couldn’t hear them if they tried. Obviously there’s some communication through doing it because I’m touching this person, but it’s not verbal.”

You’ve done most of Marc Jacobs’ tattoos and he has…a lot.

“I’ve learned so much from him about what it means to be an artist, to be creative, and not to judge. I met Marc when I was pretty young and one of the initial things I was really impressed by was that he doesn’t judge anything or anyone prematurely. If he meets a person or looks at a painting or a piece of clothing, he stops, takes it in, and gives an honest emotional reaction to it. It’s a simple thing to say, but it’s fucking exhausting to do on a comprehensive level, to stop and not categorize things quickly while looking at them, and instead stop and really consider them. He actually does that. I remember seeing that for the first time and realizing what a powerful creative force that makes him. He’s the real deal for sure.

Did you do his infamous Spongebob tattoo?

“I did! He also has his sofa tattooed on his stomach, and I think that’s really awesome. I can’t tell you why I love it or why it’s perfect. It’s just a perfect thing.”

Do you have a favourite tattoo of his?

“We’ve done a lot of South Park tattoos on him. As a reaction to the fact that he was a character to South Park once. Cartman has a little doll that’s named Muscle Man Marc. It was a cartoon of Marc but with all the tattoos I’ve done on him. Of course, Marc had to get a tattoo of that. He’s the perfect example of not taking things too seriously.”

Why do you think tattoos are so commonplace these days?

“A tattoo is a very literal and symbolic way of reminding yourself that you control who you are. You can walk in the tattoo studio and get a rose tattooed on your arm. For the rest of your life, you’re a person with a rose tattoo on your arm. That act helps you feel in control.”