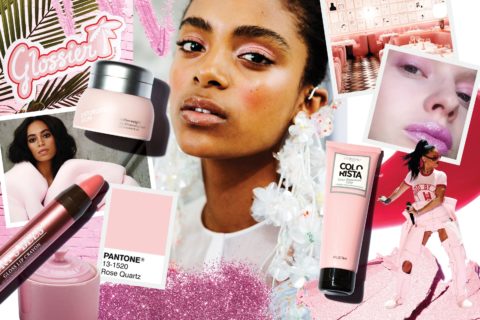 Tumblr pink. Millennial pink. Glossier pink. They’re all different names for the same pastel shade: Rose Quartz for the Pantone literate. It was 2016’s Color of the Year alongside Serenity, a powder blue that was quickly forgotten.

While Pantone’s first-ever announcement of two colours of the year was said to be a reflection of “gender equality and fluidity,” the concept of assigning pink to girls and blue to boys still holds true. However, pink didn’t have any gender associations until the 19th century, says Ingrid Mida, Fashion Research Collection Coordinator at Ryerson University. “Even then, it was more appropriate for boys, because it was a diluted version of red, the colour of the British military uniform,” says Mida. In the 1950s, pink “took on clear associations of femininity” when public personas like Mamie Eisenhower and Jayne Mansfield crafted their image around the prettiness of the colour.

It’s taken hold in the beauty world, too. Brands like Saturday Skin and Glossier have branded their products in pink, perhaps to appeal to their millennial demo. But it isn’t only being used in packaging. While it was once considered the cosmetic colour of choice for beauty pageant contestants and Barbie dolls, it showed up on the Spring 2017 runways. Pink was dusted on cheeks delicately at Delpozo and Reem Acra and more judiciously at Fenty x Puma, Chalayan and Chanel.

But what’s behind this rose-coloured moment? “To me, pink is the essence of femininity, and women are reclaiming it,” says the often-pink-haired Alyssa Garrison, Toronto-based founder of the blog Random Acts of Pastel. “Wearing it makes a feminist statement without even saying anything.” Canadian fashion designer Hayley Elsaesser, who features the shade in her collections, thinks that being a millennial plays a role, too. “Our generation is obsessed with nostalgia,” she says. “Pink is a bit of a rebellion against growing up.”

Ironically, it was a rebellion against this colour that in part inspired Sandy Lerner and Wende Zomnir when they launched Urban Decay in 1996 with the tag line “Does pink make you puke?” Today its motto is “Beauty with an edge,” and that edge includes pink. “The cosmetics landscape was totally different back then,” explains Zomnir, the company’s chief creative officer. “High-end makeup was a boring sea of pink, beige and red. It was a reaction to the limited choices and the inflexibility of the beauty industry. I think pink can be very edgy now.”

London-based makeup artist Bea Sweet (@beasweetbeauty) is also reimagining ways to use pink makeup. With her use of thick eye gloss, OTT glitter and overwhelming colour combos, her creations are more sickly than sweet and wholly mesmerizing. “Before pink, it was black,” she says. “I was a massive goth. Now, I like a pink so cute it’s almost twisted.”