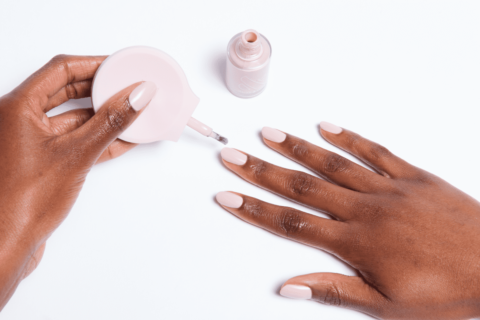 Sarah Gibson Tuttle thinks it’s high time women embrace the at-home mani. As the founder of ultra-popular L.A. based nail chain Olive & June, that may seem like a counterintuitive goal, but Gibson Tuttle has her sights on bigger things: namely, changing the face of the nail industry. She took a year off working in the salon to devote all of her energy to digging into what was missing from the puzzle of the at-home manicure.

This week, the brand launched their first-ever polish collection, complete with an array of “seven-free”—that is, free of notorious nail polish chemicals including toluene, formaldehyde, formaldehyde resin, dibutyl phthalate (DBP), camphor, ethyl tosylamide and xylene—pastel-leaning neutrals, and one game-changing device. The Poppy is a universal handle designed to fit on top of any nail polish bottle, using ergonomic design to help stabilize your painting hand. In other words, it’s the solution to the awkward and oft-frustrating shakes that result from trying to paint your nails using your non-dominant hand, resulting in a smooth nail polish application and fewer smudging incidents.

We spoke with Gibson Tuttle to find out where the nail industry is at right now, where it’s heading and how we can all get on the at-home mani train.

What inspired you to create this line of products?

In 2017, after we had three of our salons open, we were getting a ton of inbound interest from investors and franchisees, so we did a deep dive in the industry to figure out what the best way to deliver Olive & June’s happiness to everyone would be and what we learned was pretty surprising. Women on the coast were participating in nails 40 times a year, mostly at a salon, and the price of their manicure was about $12 to $14. Women outside of L.A., San Francisco and New York were participating in nails six times a year and their average price of a manicure was $25. We figured out that women weren’t really able to participate in nails as frequently as they might want to, and they felt that it was near-impossible to paint their own nails. Then at the same time, we saw the boom of everything moving to at-home, from Netflix instead of going to the movies, to make-your-own-meal services, to everything in skincare and obviously makeup. But nails was not participating in the category. 90% of the nail industry is in service. You have 10% of the industry at home, whereas makeup is 99% at-home. We had this lightbulb moment where we really felt it was important to give every woman everywhere a routine and in essence, teach them how to do their own nails.

How did you come up with the Poppy?

Every time I was using a different handle [at home], my hand was smushed, it felt like I didn’t have enough grip and I was shaking. When I went to the brush designers, I said, my hand shakes when I paint with the non-dominant [hand], it’s not comfortable. And I don’t want to mess up my nails, because once I’ve actually gotten my nails painted, I don’t want to mess them up again. I want something I can squeeze really hard without messing up my nails. Once we figured out a shape that was ergonomic and stabilizing, then it was, “How big is it? How small is it? How soft is it? How stiff is it?” The brush matters so much. So it became iterations on the shape itself. The other thing that we were considering was that I know women everywhere have many polish bottles at home, so how do we create something that’s universal, that goes on top of every nail polish bottle? That was a huge consideration for us. It’s sold separately for that very reason. I want women to get empowered to start doing this themselves. And how do we democratize that salon manicure? We lean into what you already have.

What are the main pain points of at-home manicures?

The number one issue was painting with your non-dominant hand, over and over and over again. The second biggest issue was cuticles. Everyone was like, “sure, I’ll learn how to paint but what do I do with my cuticles?” Which is something we’re tackling with our next product coming out in April. Also, there were quick dry issues. We know that it takes a minute for polish to dry, even if it’s quick dry, so we wanted to create a habit or a routine out of it. Some of the other pain points were shaping, which we get a lot of. We’re launching Olive University on our site, Olive U. With hair and makeup, there’s different skin tones and textures but with nails, it’s much more straight-forward. It’s like, 30 things people want to know, and it’s the same questions over and over and over. It’s interesting that no one’s tried to solve it. When you look at the industry, it’s mostly made up of service. You mostly have brands that you use in service and then you have manicurists. But with the at-home piece, people are just starving for information. The few tutorials [on YouTube] that are good have millions of views for a reason, because people are really just looking for information.

It does seem like people who get their nails done at salons regularly don’t try it for themselves at home.

They truly don’t believe they can. They truly believe it’s near-impossible. The thing about it is that nails is the cheapest way to change your look. It’s the least expensive way to be in beauty, and it’s the category that we’re most excited about as little girls. The women who learned how to paint when they were teenagers totally feel differently about the category. They feel like they can do it better than a manicurist, even. There is a salon market, and we love the salon market. We love our clients. But there is a demand that is not being met by the salon market and would never be met by the salon market. There is so much more demand than the salon market ever can satisfy. You have these women who are six times a year [at a salon] and they want their nails done 52 weeks a year. If women knew how to do this like they do hair and makeup, their experience would be so different. But no one’s ever leaned into teaching them.

Why did you decide to go with pastels?

We looked at what our in-salon clients love colour-wise and also what they cared about. They cared about no-chipping but also the ingredients, so how do you find that point of being as clean as possible while being as effective as possible? That was the seven-free formula. It’s longer-lasting with a base coat embedded in the colour. We look at them as new neutrals. Our clients and followers love something they can wear to any event, that they can wear to work and feel really comfortable [in], even a light blue that’s subtle enough. But they also can wear it out with their friends on a fun weekend to Coachella. We wanted to find shades that weren’t currently on the market. When we looked at what was popular at salons, we tried to find the holes. Like, a blue that has a ton of white in it so it feels like a neutral but it’s not this shade of nude.

What brush size did you find most effective, after all that testing?

We went in the middle, because some of the too-wide brushes are really hard for women with tiny nails, and we have a few people in our office who were very frequently outspoken about something that would be too wide, which I loved. I look to not only our company but also our community. We asked a ton of questions—what were people’s favourite brushes, what were their least favourite brushes, explain to us why it makes you feel good—and we found something in the middle. We have a flat brush that’s rounded at the bottom that leans a little more towards that wide brush while not being too wide, so that in one to three swipes (depending on the size of your nail) it works for you. But we cut it down a bit. We had a wide brush that I loved but it overwhelmed a smaller nail-bed, and we obviously didn’t want to do that. That was one of our last-minute changes that I think our team wanted to kill me on. But we really will not put out a product until we’re all really excited about it.

Any tricks for painting nails using your non-dominant hand?

I think the only thing I would say, if you’re not using the Poppy, is to find a bottle of polish that has a brush that is helping you not, hurting you. We probably tested about 100 brushes. Very few brushes actually help assist you. These polish bottles are essentially a pro product being delivered to the consumer, so you have to look for a bottle and a shape of a brush that is helping you paint versus you having to manipulate the brush.

I think neons are going to be king all year. I’m sad that we’re just launching our first collection because had I had a bunch of collections out, I definitely would have released neons. I was this close to buying a neon yellow sweatshirt this weekend, which at 38 is pretty surprising. I think a lot of colours are becoming more mainstream and a lot of fun and I think with nails, it’s becoming easier for people to rock whatever they want and for that to be normal, versus a wild and crazy mani that you can’t wear to work. I think you’re going to continue to see the trend of more rounded nails. Women are loving that feminine shape. Nail art-wise, other than New York, I think it’s a lot of fun and people are loving it. We continue to see evil eyes being one of the absolute most popular manis in our salon. I just saw a neon mani with evil eyes the other day and I was like, “of course.”