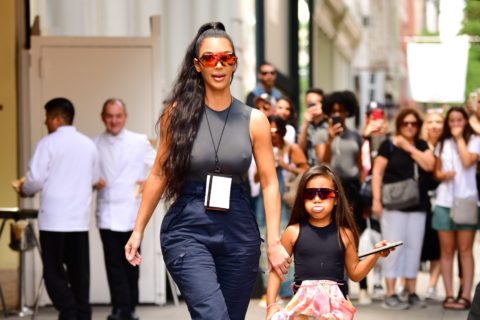 If you follow Kim Kardashian West, her six-year old daughter North West is a regular presence on the Keeping Up With The Kardashians star’s social feeds. From the sassy poses to performances, North has become somewhat of a social media star, not least thanks to the bold makeup looks she’s sported over the past year.

Her favorite part of the week is dancing during Sunday Service pic.twitter.com/yhiDhBqBY5

She’s rocked black lipstick, red lipstick, orange eyeshadow and pretty much everything in between, however Kanye West is no longer so thrilled with the idea. Chatting with E! News at the launch of KKW Beauty at Ulta today, Kardashian revealed that her own love of makeup has transferred to her daughter but West has laid down some new rules. “North is trying to get in on the makeup, but she’s being blocked heavily because her dad has stopped all makeup for her until she is a teenager. It’s a big discussion, a big fight in the household right now but it is what’s best. I think as a parent you just learn and figure it out as you go and we realized we didn’t really want her to wear makeup at a young age but she sees her mom putting on lipstick and lip gloss.”

The KKW Beauty founder said its an uphill battle, not least because her Aunty Kylie is the world’s youngest self-made billionaire courtesy of her Kylie Cosmetics business. Kim shared that Kylie has previously gifted North all of her lip kits. “I kind of got in trouble for that, too. So, it’s now no more makeup.”

Kim was in New York to fete the launch of her eponymous beauty line landing in stores for the first time at Ulta. “I’m so excited to finally be in store,” she said. “It’s really important to me because people can now test the products, feel the products. I’m a huge online shopper but I also – when I get the time – love to just test everything so I know people wanted that experience. I really listened to what they wanted.”