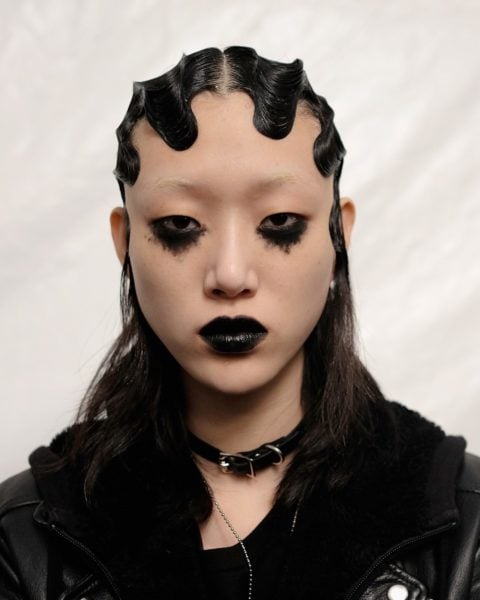 Why Do We Have a Never-Ending Fascination With Goth Makeup?

It’s finally October, which means that it’s recess everywhere but in our hearts. No longer squashed by the pressure to appear dewy, glistening, or whatever the hell else summer demands, we can finally parlay our angst, anger, and general discontent into aesthetic choices. (And I can finally begin channeling the vibe of a Victorian ghost). In short: we can go full goth.

The thing is, there are few beauty consistencies like that of the gothic-inspired. On top of nineties nostalgia inspired by The Craft, Scream (never discount Drew Barrymore’s bleached hair and brown lips), or anything Tim Burton directed, recent looks by FentyxPuma, Philipp Plein, and Valentino also ushered in dramatic, matte makeup. This season, Chloe and Balmain gave models smudged, smoky eyes, makeup artist Polly Osmond described her Christian Siriano looks as “Victorian techno goth”, and dark lips were, well, everywhere. But while seemingly less prevalent in the mainstream, goth-centric makeup (and goth culture) has always had a place.

We know that traditional beauty thrives on being fleeting. It’s based on trends, on the myth of perfection, and on the outdated idea of what a woman “should” be. And while slowly improving, it still stresses the importance of “looking natural” while shilling products we’re reminded we “can’t live without.” Terms like “feminine” and “girly” are buzzwords that fail to include anyone who’s never felt that way. Heteronormative sex appeal is currency, and serves to make anybody outside of it feel less than and excluded.

Goth makeup works to reject much of that.

There was a reason it was disappointing to watch Ally Sheedy’s character in The Breakfast Club be made over by Molly Ringwald; her black eyeliner replaced by pastels and her hair pushed back with a headband. Because not only was she the only character who had to undergo a physical transformation to finally be seen (particularly by Andrew a.k.a. Emilio Estevez), her Big Reveal™ signalled that to abandon one’s darkness was a worthwhile trajectory. It was a glorified beauty ad: look like everybody else, and find agency as a person. And it connoted that anyone who’d previously subscribed to her previous beauty regimen did so only in hopes that they’d be made over and recognized as people, too.

But goth makeup thrives on more than just the physical expression of self. It extends back to the Victorian era, in which the Queen’s grief over the death of her husband permeated mainstream culture so much that her subjects wore black to emulate her, channeling the darkness and sorrow that defined the majority of her reign. It bled into pop culture through genres like shoegaze and new wave, which articulated the frustration and angst and despair of youth. And it weaved its way into the mid-1990s, ensuring differentiation between “us” and “them.” So, goth makeup eventually became the fastest way of aligning yourself with being an outsider, of choosing to reject the norms set up by mainstream beauty and fashion industries, and of expressing yourself in a way that serves as both self-expression and self-empowerment.

So while it’s great to see goth makeup touted as a beauty trend worth testing out, it’s even greater to revel in the fact that after years being pushed back against (or redone completely, at least in eighties-era coming-of-age films), it’s cool not to be traditionally feminine, “natural,” “dewy,” or to channel the girl-next-door (whoever she is). Even though it’s cooler just to express yourself the way you want.