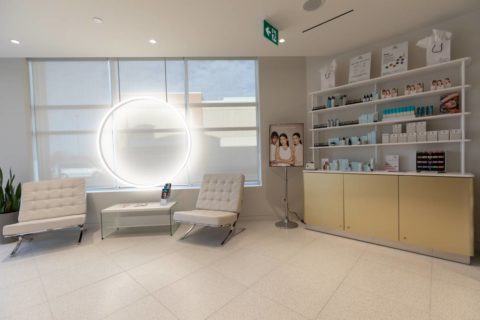 With two locations now open in Ontario, the drug store chain is lifting the veil on the $1 billion medical aesthetics industry

If you’ve ever mulled over the idea of a bit of Botox here, some filler there, a chemical peel or microdermabrasion, without ever actually getting around to those necessary first steps of research and consultations, then you might be exactly the consumer Shoppers Drug Mart had in mind when designing their latest concept. In an effort to demystify the market of non-surgical cosmetic procedures, the national drug store chain has launched The Beauty Clinic, a medical aesthetics boutique offering services that range from IPL photorejuvenation to microneedling, lip enhancement fillers, Botox, laser hair removal, medical-grade peels and more.

“The challenge that I think a lot of people had was that the industry, as it stands, makes it a little bit hard to get into it if you don’t know someone,” says Sarah Draper, senior director, healthcare partnerships and innovation at Shoppers Drug Mart. “You know you want to try it, but how do you start? There’s a lot of trust associated with the Shoppers Drug Mart brand, and if we’re going to do something, we’re going to bring it to the market in a very open, transparent, accessible way.” With convenient hours (9am to 9pm on weekdays, and 9am to 6pm on Saturdays), free consultations and clear prices listed online—Botox is $10 per unit, IPL is $250 per treatment and dermal fillers cost $250 per syringe, all redeemable for PC Optimum points—The Beauty Clinic is designed to democratize a market that has long been shrouded in exclusivity, confined to an upper echelon of society and largely inaccessible to the vast majority of consumers.

Injectable beauty bars have been picking up steam over the past year, offering customers a more casual way to approach and explore Botox, Restylane, Juvéderm, Radiesse and the like. Coming from a major chain with over 1,300 locations across Canada, the move on Shoppers Drug Mart’s part also gives the market of non-surgical cosmetic procedures a firm nudge into the mainstream. “When Shoppers comes into something, it brings an aura of accessibility that I think will be helpful in the overall conversation,” says Draper. One major difference from the traditional in-office cosmetic enhancement avenues and its adaptation within a drug store setting is the absence of a medical doctor. All injectables are carried out by nurse-practitioners, who receive initial and on-going training from an on-staff (but not on-site) plastic surgeon. “Our nurse-practitioners all have well over a decade of experience in cosmetic dermatology but also in emergency medicine and cardiac medicine,” says Draper. “They really know their stuff and they’re well-trained in medical aesthetics in particular.”

The concept is now up and running at two Ontario locations—in Oakville and at Shops at Don Mills, their newest addition—with plans to potentially expand across the country. “So far, we’re really excited. “Everyone who has come in has had a really positive experience,” says Draper. “We’re going to continue to monitor how this business is going and take it from there.”

Photography courtesy of Shoppers Drug Mart
Get the best of FASHION in your inbox Thanks for signing up!
The latest fashion, beauty and celeb news delivered right to your email #FASHIONforall Now, check your inbox to complete your subscription
We won’t ever use your email address for anything else
Want even more FASHION? Follow us on social media.