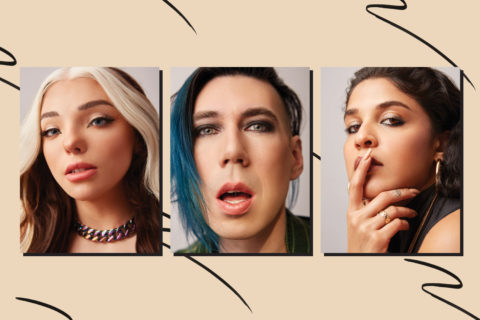 For These Three Canadians, Eyeliner is More Than Just Makeup

It communicates who they are.

Eyeliner is, without a doubt, a runway mainstay for makeup artists each season. Just look to the Spring 2020 shows and you’ll discover a playground of framed rims ranging from the reinvented cat-eyes at Moschino and 3.1 Phillip Lim to the smoky liner looks at Ann Demeulemeester and Celine. But trendsetting beauty aside, for many of us, eyeliner can be a go-to source of identity and self-expression and, sometimes, our strongest weapon. Here, a Canadian YouTube star, a musician and a publicist explain their emotional bond to their signature liner looks.

Being a first-generation Canadian with parents who emigrated from South India, Edmonton-born, Toronto-based Talya Macedo says that her smoky kohl-rimmed eyes are a connection to her family. “My mom wears [kohl], my aunts still wear it and my cousins wear it,” she says. “We’re all split up, and it’s crazy to me that this is a look that binds us.” The trademark gaze is also how she embraces her heritage. “I do feel that adornment and beauty are really great ties to my culture,” explains the 34-year-old brand and image strategist. “I feel like I look like my mom, or my aunts and cousins in India, when I wear a lot of gold, have my hair parted down the middle and wear a red lip and tons of eye kohl.” Macedo had her first experience with makeup at age 10, when she would perform Bharatanatyam, a popular form of Indian classical dance. She wasn’t fond of the full face of makeup she had to wear, but when it came to her inked waterline, she was instantly hooked. “I remember looking in the mirror and being like, ‘Whoa, I always want my eyes [to look] just like this!’” By the time she was 16, traditional black kohl liner had become an integral part of her everyday look, even if that meant challenging Western beauty ideals. “I remember reading [in a magazine]: ‘Never line your waterline. It instantly makes your eyes look smaller.’ I was so confused by that because I lined mine every day, and it made my eyes look beautiful and big and made me look like myself,” says Macedo. “That was the first piece of Western beauty advice that I learned to ignore.” And whether she’s zeroing in on her waterline or going for a more dramatic, smudged-out look, Macedo’s longtime kohl signature is all about confidence. “It’s equal parts power and sensuality, and I don’t apologize for sensuality in my day to day,” she says. “I make a point to be sex-positive in the greatest way possible.” 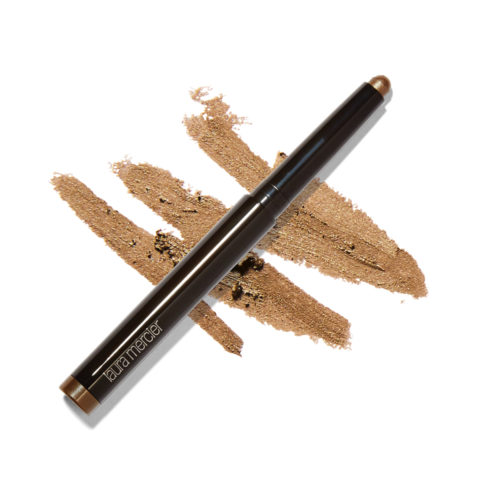 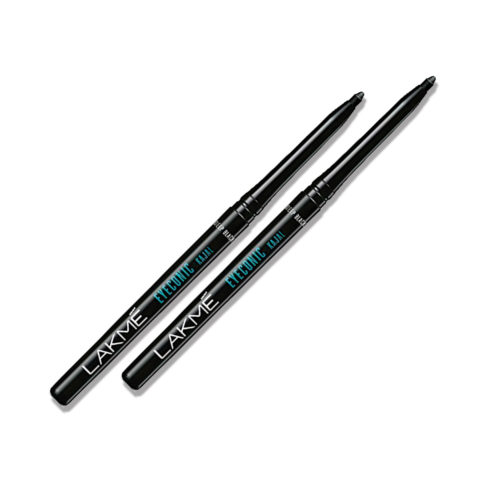 “If I want a little something more, I’ll put this on top and underneath the rim and smudge it all over.”

“Whenever my aunts come from India [to visit] and they’re like, ‘What do you want me to bring?’ that’s the only thing I ask for. It’s actually produced there.”

For Marianas Trench lead singer Josh Ramsay, makeup knows no gender. “I think it’s a stupid gender stereotype if people think that only girls can wear it,” says the 34-year-old Vancouver-based rocker. In showbiz, men slapping on makeup is nothing new. “Literally everyone you see on camera—male, female, whatever—is in makeup. I just choose to be noticeably in makeup versus a nude look.” Ramsay happened upon his signature liner back in 2006, when a makeup artist made him up for his band’s first photo shoot. After working with the artist repeatedly, Ramsay couldn’t get enough of the look and eventually asked the pro to show him the ropes. “I didn’t grow up playing with makeup or anything,” he shares. “I needed someone to show me how to do it.” So how does he define his trademark? “First of all, I never want to look like Captain Jack Sparrow!” he jokes. “I usually apply it on the waterline and then go smoky and rubbed out on the top eyelid.” It’s an inky look that rotates colours, and that’s crucial to Ramsay’s onstage persona, he says. “I think of other male artists who have been makeup-forward, like Bowie, and it really is a transformation into somebody else when you’re onstage. It helps me be larger than life when I’m up there.” Society may still adhere to exaggerated macho concepts about masculinity, but Ramsay unapologet­ically blurs the lines by never veering from his true self. “I’m straight, but I am very androgynous and always have been. It’s not a decision; it’s just how I’ve always been.” 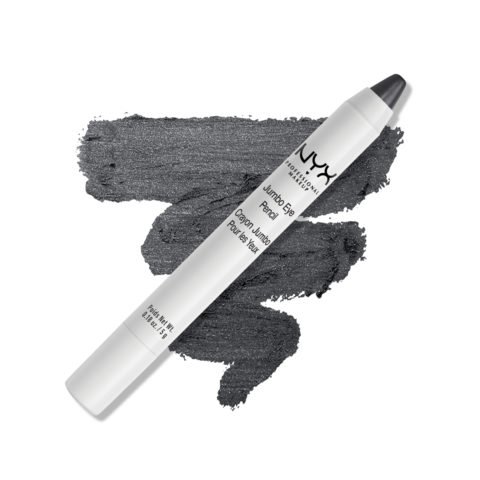 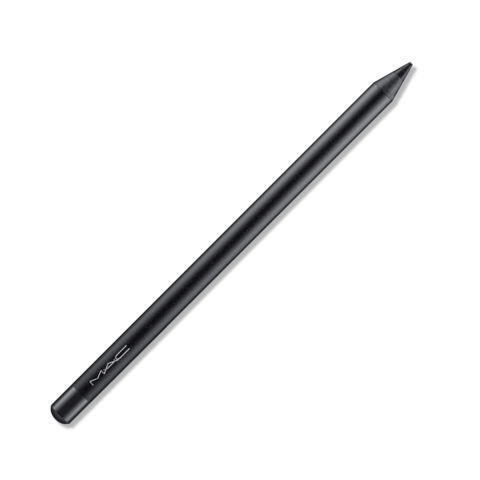 “I prefer a crayon-style liner for my top lid because it’s easier to smudge.”

“For my waterline, I definitely use a pencil.”

Stef Sanjati is the definition of an open book. For over a decade, the 24-year-old Toronto-based YouTube star, transgender activist and Rimmel brand ambassador has been vlogging about her most intimate experiences. Her channel, which has amassed hundreds of thousands of subscribers, started with simple makeup tutorials but morphed into raw, unfiltered videos chronicling everything from the procedures of her feminization surgery back in 2016 to her inherited genetic trait, Waardenburg syndrome—a condition that causes her to have wider-set facial features, hearing loss and pigmentation loss in her hair, skin and eyes. For this candid social media buff, her first dabble in makeup was a vivid one. When Sanjati was 13 and identifying as a young gay man, her mother took her to buy her first makeup kit, which consisted of black and gold eyeshadow and liquid liner. Little did Sanjati realize at the time that “that was an extension of [her] experimenting with gender,” she says. Her initial looks of “wild, graphic, painterly” makeup were purely for fun—until she watched one game-changing tutorial on how liner could create the illusion of closer-set eyes. Sanjati began creating a double-wing look by drawing an extended solid line down the inner corners of her eyes to match the outer wing. It was a bold, graphic look rooted in self-doubt. “I was very insecure about the space between my eyes,” she recalls. “I couldn’t leave the house without [eyeliner].” And growing up in a small town in southern Ontario, Sanjati felt anything but ordinary. “There was one kind of person, and that was all you were allowed to be,” she says. “It’s extremely alienating not being able to see yourself or anybody else who is different from the majority.” After her medical transition and facial-feminization surgery, Sanjati’s approach to makeup shifted. “Earlier in my transition, before any surgery, before my hormones were really kicking into high gear, I still used makeup to create a different face,” she says. Today, it’s all about enhancement through a “softer and more romantic” smudged-liner look. But she keeps her exaggerated cat-eye in her back pocket for nights out. “I’ve entered a time in life where I’m more content and more confident with who I am at my core without any makeup on,” she says. “I don’t use it in the same transformative way. My approach to eyeliner is no longer about hiding my eye shape; it’s now about how cool that shape is.” 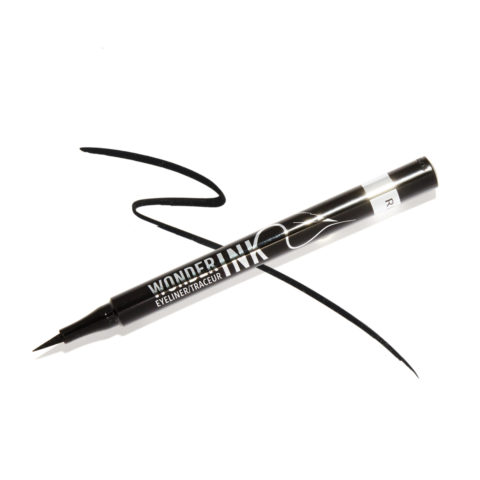 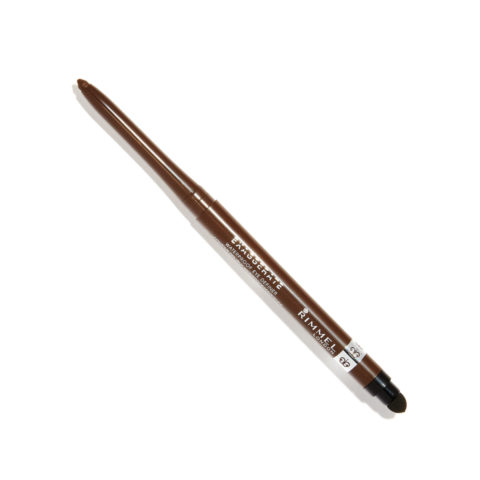 “This is the liner I’ll use if I want to create a more dramatic double-wing look. I like it because it’s got that pen shape and it’s easy for me.”

“I use this for my daily look,” says Sanjati. “I tightline my eye with it and apply a thin layer on my lid with a small wing. Then I smudge it out to create that soft look.”

Buy Now
Photography by Porus Vimadalal
Get the best of FASHION in your inbox Thanks for signing up!
The latest fashion, beauty and celeb news delivered right to your email #FASHIONforall Now, check your inbox to complete your subscription
We won’t ever use your email address for anything else
Want even more FASHION? Follow us on social media.