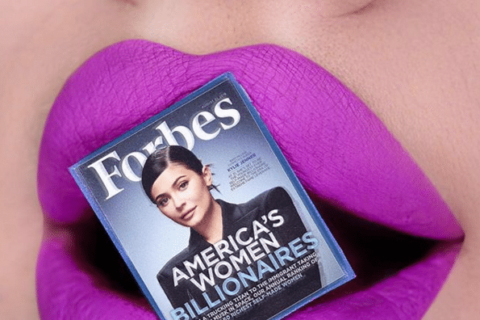 Does Kylie Jenner Want To Capitalize Off The Skincare Boom With Her Own Line?

As if she doesn't already have enough going on.

Back in August, the eighth most followed person on Instagram, (with a 116.2 million followers, we mine as well say the eighth most followed person in the world), covered Forbes magazine as the youngest person ever to reach billionaire status thanks to a $900 million dollar fortune amassed by a makeup company. That person’s name is Kylie Jenner and apparently, she wants to build a skincare empire as well.

Now that the concept of self care is something everyone seems to be down with, skin care is one of the fastest growing markets in the world according to a press release by U.S. based market research and consulting company Grand View Research. A new report by GVR also found that the global skin care products market is projected to reach $177.15 billion by 2024, and stringent regulations promoting the use of organic materials in the skin care industry is likely to propel market growth.

wow. i can’t believe I’m posting my very own @forbes cover. thank you for this article and the recognition. I’m so blessed to do what i love everyday. i couldn’t have dreamt this up! #KylieCosmetics

Thanks to the rise of online shopping, accessibility to beauty products has increased over the past few years as consumers are able to purchase products from anywhere in the world. Most notably, organic and natural products have become a major segment in the cosmetics and wellness market due to the suspicion over certain ingredients, GVR’s report says. Just look at ‘clean clinical’ skincare brand like Drunk Elephant, who earlier this week announced their own plan for becoming the next billion dollar company.

Since the news broke, Jenner hasn’t denied or confirmed whether or not a skincare line is her next big move. And though all of her current makeup isn’t tested on animals and is 100 per cent vegan, let’s hope that the ingredients in her supposed new line are safer for us than the ones in her cosmetics.

PHOTOGRAPHY VIA INSTAGRAM/@kyliecosmetics/@lipsonfire_
Get the best of FASHION in your inbox Thanks for signing up!
The latest fashion, beauty and celeb news delivered right to your email #FASHIONforall Now, check your inbox to complete your subscription
We won’t ever use your email address for anything else
Want even more FASHION? Follow us on social media.