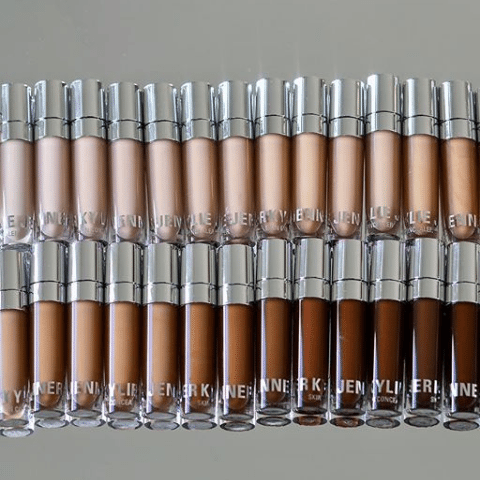 Kylie Cosmetics is Launching the Largest Range of Concealers—Maybe Ever?

*And* a whole lotta bullet lipsticks

Pardon my language but 2017 was, for the most part, an unparalleled shitstorm. But there was one singular, distant glimmer of hope: the increasing diversity in the beauty industry. Between Fenty Beauty, Allure’s Halima Aden cover (aka the first major American magazine to feature a model wearing a hijab), and the new era of CoverGirl (to name only a few), a long-overdue shift has started to take place. (There’s obviously still a billion miles to go.)

Joining that list and sneaking in at the very end of the year, is, surprisingly, Kylie Cosmetics.

30 shades from fair to deep dark! All available on Dec 13 at KylieCosmetics.com as part of the #SilverSeries… Still one more surprise to come, so stay tuned!

Just yesterday, Jenner announced that her wildly successful makeup line would be delving into face products for the first time (if we don’t count highlighters and blushes). And she’s jumping right in with a whopping 30 shades of concealer. Thirty.

Skin Concealer Swatches. Stay tuned for more throughout the week!

Finding @forevermalika’s shade.. our concealers launch on the 13th… ?

Jenner seems keen on showcasing the impressive shade range (and rightfully so), because the Kylie Cosmetics account has posted about the new concealer line an astounding 21 times (!) on Instagram—since yesterday.

What makes shade ranges from brands like Fenty Beauty (which btw, features 20 Match Stix that can be used to contour) and now Kylie Cosmetics, as large as they are, is that they take undertones into consideration, rather than just providing shades from light to dark.

As you can see, there are Kylie shades available for pink, yellow and olive undertones.

Available in an all-inclusive range of 30 shades from fair to deep dark. #December13 #SilverSeries

And there’s more! The brand also announced that as part of its chicer, sleeker looking “Silver Series,” it will be launching 20 bullet lipsticks. AKA not liquid lipsticks. AKA not drying (hopefully). AKA the opposite of what made Kylie Cosmetics famous!

Our new exclusive formula glides evenly onto the lips leaving them soft and full of color! Pick your perfect shades. #SilverSeries ?

Both the lipsticks and the concealers will be launching on December 13th on, where else, kyliecosmetics.com.

Full pigmentation with just one swipe! You guys are going to love this crème lipstick formula ❤️ #SilverSeries #December13

The Silver Series Brush Collection, all of Kylie’s favorite brushes, available individually and as a set on December 13!

Photography via instagram.com/kyliecosmetics
Get the best of FASHION in your inbox Thanks for signing up!
The latest fashion, beauty and celeb news delivered right to your email #FASHIONforall Now, check your inbox to complete your subscription
We won’t ever use your email address for anything else
Want even more FASHION? Follow us on social media.